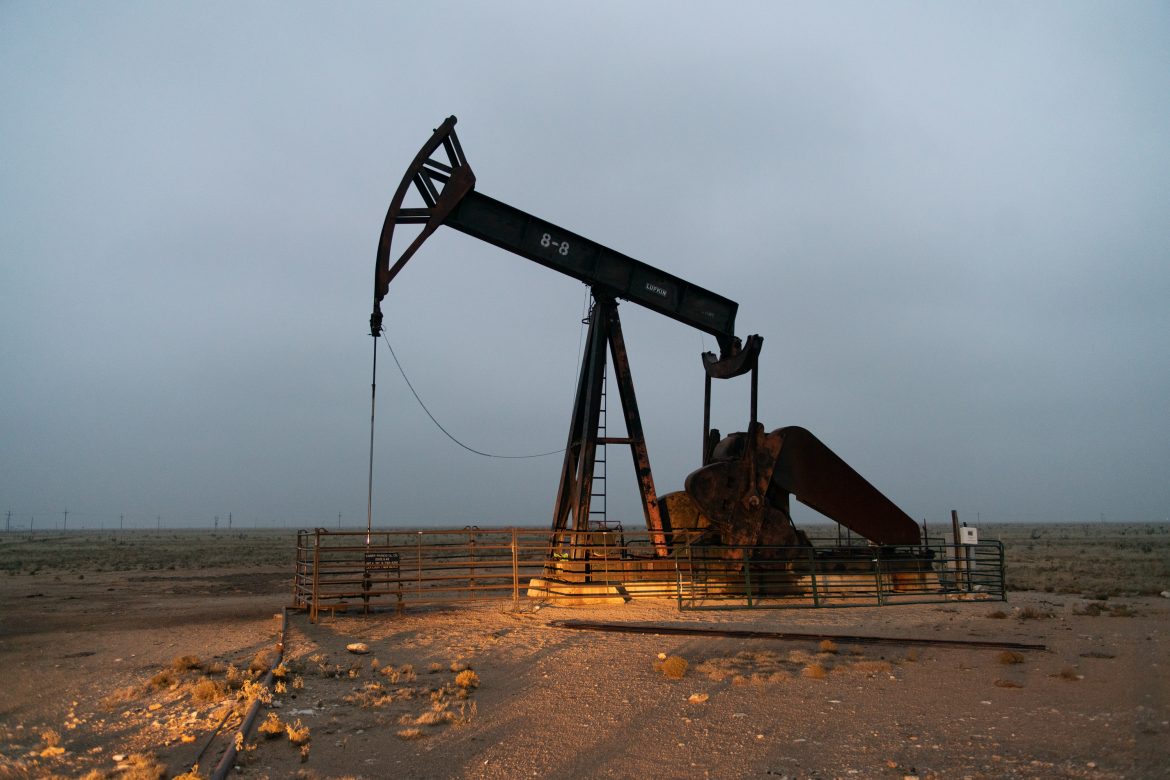 LOVINGTON—The 61-mile drive on US 82 from Artesia to this southeast New Mexico town crosses the heart of the Permian Basin oil field’s extension into the state. Pump rigs bob like great iron dinosaurs come to life, and the smell of petroleum fills the air. Flare pipes burn off natural gas and methane like fire-breathing dragons.

It’s the scent of economic opportunity for some, the stench of impending danger to others. Industry experts and environmentalists agree on one thing: the September 2018 sale of nearly $1 billion in federal leases has set off one of the greatest oil booms in American history and has overwhelmed everything from the region’s highway to its housing supply.

Lea County expects to double in population, and law enforcement and fire officials are concerned that rapid growth will strain their meager resources. Lovington city manager James Williams is working to entice housing developers and making plans to repair the town’s aging infrastructure through increased gross receipts taxes and other revenue.

“Of course, that does allow the city to do more,” he said. “You know, fix roads, repair our aging water and sewer lines that are leaking.”

Local businesses are increasingly pressed to keep up with demand for everything from groceries to pickup parts. Everybody’s hiring, including city hall, which has lost several employees to good-paying jobs in the fields. An oil pumper averages more than $46,000 a year, according to salary.com, and some workers make twice that. But even those numbers pale in comparison to the $90,000 to $120,000 salaries possible for experienced drillers and commercial truckers.

The rush also places unprecedented stress on the state’s ability to oversee the industry and enforce regulations. A bonding capacity increase was considered a hard-fought victory with Republican Governor Susana Martinez in office. New Mexico House Speaker Brian Egolf said he intends to build on that success, in part by balancing the interests of the industry, the environmentalists, and the state.

It is indisputable that there is not enough funding for the New Mexico Environment Department. The hiring of additional staff is overdue, and essential to accommodating the industry while ensuring the protection of the environment.

More staffing can reduce the amount of wait time during the drilling permit issuing process, which Egolf calls a “high priority” in the upcoming session of the Legislature. It also means having more trained state personnel to oversee the double casing and cement work essential to protecting the aquifer. With treated water under high pressure, even minor flaws in the breakdown of wells, ruptures in pipes, and damage to the environment.

“More inspectors means the quality of the cement jobs will go up,” Egolf said. “It’s a win-win for everybody. It’s good for the industry to have [the process] done more quickly, and it’s good for the environment because we’ll have more inspectors on the job. It’s something we’ll put on the front burner for sure in the next session.” With larger petroleum companies interested in New Mexico oil, Egolf said, bigger may actually be better for the state — historically, smaller companies have generated many of the environmental problems.

“More inspectors … will make me and others much more comfortable that production can be done without serious risk to groundwater.”

Underlying everything, literally and metaphorically, is Lovington’s municipal water supply, located approximately five miles south of town. More oil drilling activity increases the risk of contamination to the Ogallala Aquifer-fed well system. One third of the oil-industry wells are now being sunk to dispose of endless millions of gallons of “produced water,” or water that returns to the surface after hydraulic fracturing. This process not only adds to the cost of extracting oil and gas but also endangers the groundwater upon which residents rely.

That risk is something former Lovington city manager Pat Wise knows plenty about. Back in 2003, unreported oil and effluent spills and discarded drill-rig equipment turned the town’s municipal water-well field — the source of its drinking water — into a polluted junkyard. Joined by other city officials, Wise demanded action from the OCD.

“I forced them to do that, to clean up their mess,” Wise, 69, recalled during an interview at his longtime family home on 5th Street. “That didn’t curry me much favor with the oil and gas companies, but I didn’t really care. My first job was to protect that water table.” Today Wise heartily endorses Lovington’s water quality.

Not everyone does. James Compton, for one, was convinced that something in Lovington’s water caused his glioblastoma — an aggressive kind of brain tumor. Not just his, but others’ as well.

The son of an oil field worker, 34-year-old Compton was raised in Lovington and had fond memories of the town he knew as a boy. He understood that the prosperity of the town depended on the oil fields, even if the air held the odor of petroleum and the drinking water sometimes smelled.

After high school, Compton attended college and worked a variety of jobs locally and as far away as Denver.  He started a cleaning service and a delivery company, worked on websites and was employed for a while by a computer company.

He eventually returned to Lovington, where in 2017 his cancer was diagnosed.  He immediately suspected environmental factors, recalling the taste of the water and the smell of the pool in which he swam daily for many years. Within weeks of his diagnosis, he began “investigating my own murder,” as he called it.

Compton took to social media and attracted more than a thousand followers on Facebook as his condition worsened. He collected several dozen names of other cancer patients – many of whom could not be independently verified. With his friend Rachel Lehcar, Compton started the Lea County Cancer Cluster page on Facebook and the leacountycancer.com website.

His efforts ultimately attracted the attention of Lovington city officials. Last summer, Williams called for an independent test of the municipal water-well quality and contacted the New Mexico Department of Health, which reported that the rates between Lea County and the rest of the state showed no statistical difference between 2011 and 2015.  “With glioblastoma diagnosis rates at 2.5 per 100,000 in Lea County and 2.4 per 100,000 statewide, both are below the national average of 3 per 100,000,” the Department of Health concluded.

Charles Wiggins, director and principal investigator of the New Mexico Tumor Registry at the University of New Mexico school of medicine, concurred. “We found that the rates of that tumor were about the same, or very similar, to the rest of the state.”

Williams vows that “protection and preservation of our municipal water supply is our number-one priority, along with conservation as well,” pointing out that his own family consumes the water. Lovington’s water is tested monthly for quality, including a chemical analysis that notes any increase in dangerous chemicals and byproducts — some of them carcinogenic — associated with petroleum drilling.

“We recognize there is always a potential for it, but we do everything in our power to mitigate and eliminate that risk,” said Williams, adding that Compton’s concerns “did not change any of our protective mechanisms we’ve got in place or any of our testing. It just provided us some information that does say that the rates here in Lovington and Lea County are not higher than anywhere else.”

Of course, that is no solace to those diagnosed with cancer. After Compton died on Oct. 21, Lehcar posted on Facebook that she would continue the fight, but “we just had to hit the pause for a bit.”

An economic engine that requires oversight

It’s important to understand the scale of the oil and gas industry in southeast New Mexico. Lea and adjacent Eddy counties have long been New Mexico’s leading oil producers, even before the boom that accompanied the rise of hydraulic fracking technology.  The Permian Basin, 250 miles wide and 350 miles long, takes up most of west Texas and extends into eastern New Mexico. It’s been the source of more than 500,000 barrels of crude per day with predictions of more than double that production in the coming months.

Environmentalists and some state officials say that New Mexico’s unique geology puts its groundwater at greater risk than other states where fracking has been shown to contaminate water supplies. In the Permian, the groundwater aquifer rests on a basin of limestone. Beneath that is a salt bed. With oil shale resting from 3,000 to 15,000 feet beneath the surface, a single drilling through limestone takes millions of gallons of freshwater. Despite improvements in the process, public and private agencies acknowledge the risk of groundwater contamination is high in all affected counties.

While controversy has long surrounded the hydraulic fracturing process, industry proponents argue the process poses little serious risk to water sources if done properly. But the EPA has disagreed, finding that thousands of wells throughout the West are vulnerable to contamination.

At the state level, the OCD gathers well production data; permit[s] new wells; enforces the division’s rules and the state’s oil and gas statutes; make[s] certain abandoned wells are properly plugged; and ensure[s] the land is responsibly restored,” division director Heather Riley notes on the agency’s website. But with fewer than two dozen inspectors, enforcing its mandate may be impossible.

In 2012, Earthworks — an environmental nonprofit organization based in Washington, D.C. — produced a study that found OCD had failed to “fulfill its duty to the law, and to the public interest.” If there is enough money to drill throughout the region, Bruce Baizel, energy program director for the organization, said, there should be enough funds to strengthen regulation and improve enforcement.  He sees it as “make hay while the sun is shining moment for New Mexico. It’s got a lot of revenue and, yes, there are a lot of issues facing New Mexico: education, health care, and jobs need to be addressed. With so much revenue, now it’s incumbent upon the state to take advantage of that revenue and ratchet enforcement so the environmental impacts of the oil and gas boom are minimized.”

CORRECTION: An earlier version of this story misidentified the Oil Conservation Division as part of the New Mexico Environment Department. It is part of the Energy, Minerals and Natural Resources Department.