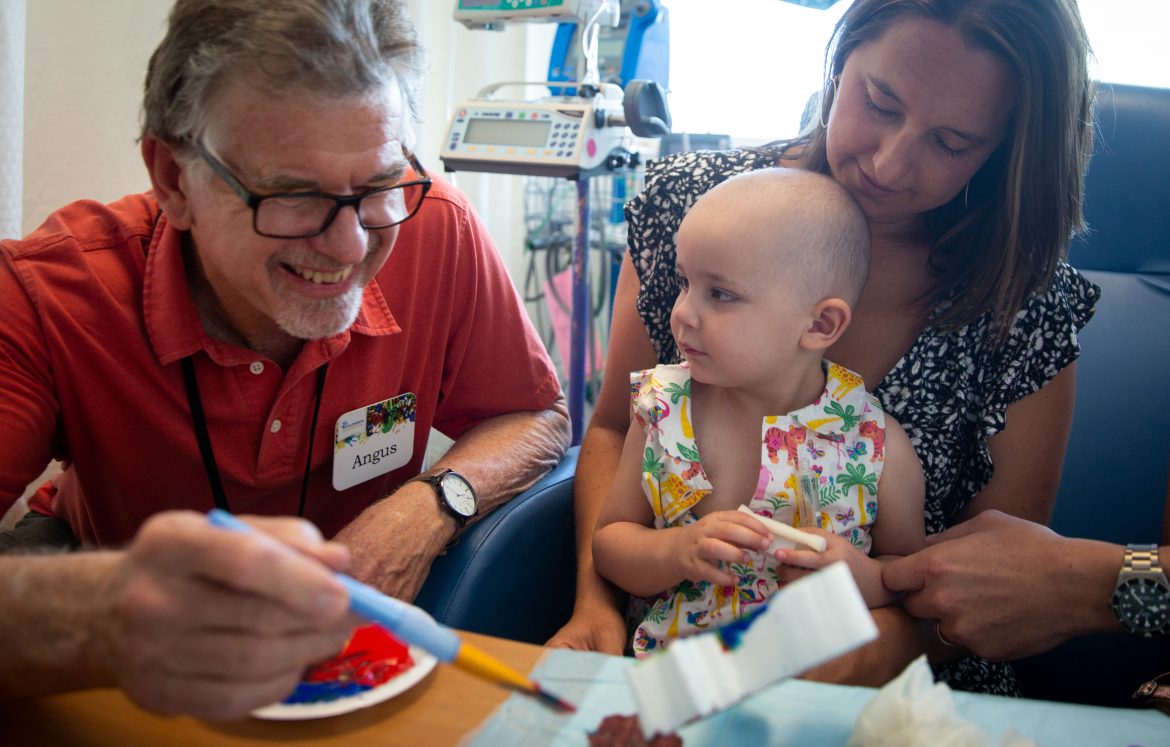 Mike Chicarelli strode the halls of the children’s pavilion at the University of New Mexico Hospital, fist-bumping nurses and proudly pointing out the hospital’s kid-friendly touches: the surgery waiting room with seats shaped like hot air balloons, the intake counter designed like a 1950s soda fountain.

The former emergency nurse, now chief operating officer of UNM Hospitals, was showing off what $234 million could buy a decade ago in infrastructure and technology. But all the bells and whistles haven’t been enough for UNM to hold onto its top pediatric specialists.

Competition between UNM and Presbyterian Hospital – the two largest providers of pediatric specialty care in the state – has made it hard for either to sustain programs in cardiology, neurology and other areas of children’s medicine.

The hospitals are now discussing a possible joint venture – a single children’s hospital, unified under common governance or housed under the same roof – that would help New Mexico retain hard-to-recruit pediatric specialists, improve care coordination and raise the bar on patient outcomes.

Healthcare professionals argue that this would make good medical sense. But what about financial sense?

It depends whose wallet you’re talking about.

When it comes to new infrastructure, “hospitals are extremely, extremely expensive to build,” Chicarelli said. “What architects generally use as a rough order of magnitude is between $1.5 million and $2 million per bed.”

If the two unite, they’ll effectively create a monopoly in children’s specialty medicine – one that could have unintended economic consequences for some New Mexican families. The price of improved access to specialists in a rural, Medicaid-dependent state may be more expensive care for those who rely on private insurance.

A recent study from the National Bureau of Economic Research showed that hospitals negotiate higher prices when they face less competition. The study, which focused on general medicine, found that hospitals with regional monopoly power charge an average of 15 percent more than those in areas with four or more hospitals.

Because Medicaid payments to providers are fixed and “capitated” – meaning providers are paid a flat rate per person, not per service rendered – hospitals often negotiate inflated prices with private insurers to recoup the uncovered cost of care to low-income patients. Those costs are passed on to consumers of private health insurance.

In New Mexico, one third of children are covered by their parents’ employer-sponsored health plans or insurance purchased in the private market.

The costs to families of children with special needs are already high. Many are forced to travel out of state due to longstanding competition between Presbyterian and UNM; insurance companies have restricted their networks to one or the other hospital system, and neither institution serves the volume of patients required to retain a staff of specialists.

A task force, convened by the Legislature in the past session made 10 recommendations to improve the situation. The top suggestion was to create a “single, unified Children’s Hospital incorporating all pediatric specialties available in New Mexico,” starting with a joint complex care clinic that would give parents one-stop access to specialists.

Jason Mitchell, Presbyterian’s chief medical officer, said his organization supports a feasibility study for “a true children’s hospital that is built for children, designed for children, staffed for children.”

Chicarelli made clear in his tour that UNM’s Children’s Hospital already fits the bill. And in a Twitter post last month, UNM repeated a favorite claim: that it’s proud to host New Mexico’s “only Children’s Hospital.” But it added a qualifier, saying the hospital looks forward “to collaborating with other healthcare providers to continue to improve access to care for kids.”

In the merger of the New York hospitals, opposition by NYU faculty provoked turmoil and mistrust, according to research published in the Journal of Academic Medicine. In California, disputes over funding flows frustrated the hospitals’ merger, according to a study by Harvard’s School of Public Health.

And this is important: It isn’t easy to mesh the culture of an academic institution like UNM with that of a community hospital like Presbyterian, according to Kate Becker, chief executive of UNM Hospitals.

Such hospitals have different missions and ways of working, she said. Whereas surgeons at a community hospital see and treat patients exclusively, doctors in an academic setting double as instructors.

Like Presbyterian and UNM, the two were located about two miles apart. And the mission of the merger was akin to what New Mexico practitioners say they want for this state: to improve access to and retention of specialists, maintain clinical volumes and improve the stability of specialty care programs.

New Mexico has the right conditions for a unified children’s hospital “if everyone can recognize that there will have to be some tradeoffs,” said Mark Wietecha, president and CEO of the Washington, D.C.-based Children’s Hospital Association, which represents 220 pediatric hospitals nationwide.

Health care providers argue that when children’s health is on the line, considerations about access, quality and safety should come first.

For physicians, “the data suggests that the more procedures you do, and the more experience you have in a given clinical program, the better the outcomes,” said Wietecha. “Certainly, it’s safer. For a community, getting to scale is important.”

But as Kaiser Health News editor-in-chief Elisabeth Rosenthal argued in An American Sickness, her 2018 book on the health care industry, the economies of scale achieved by combining administrative functions when hospitals merge don’t always translate to lower prices.

“With their market power, big providers can simply demand more.”