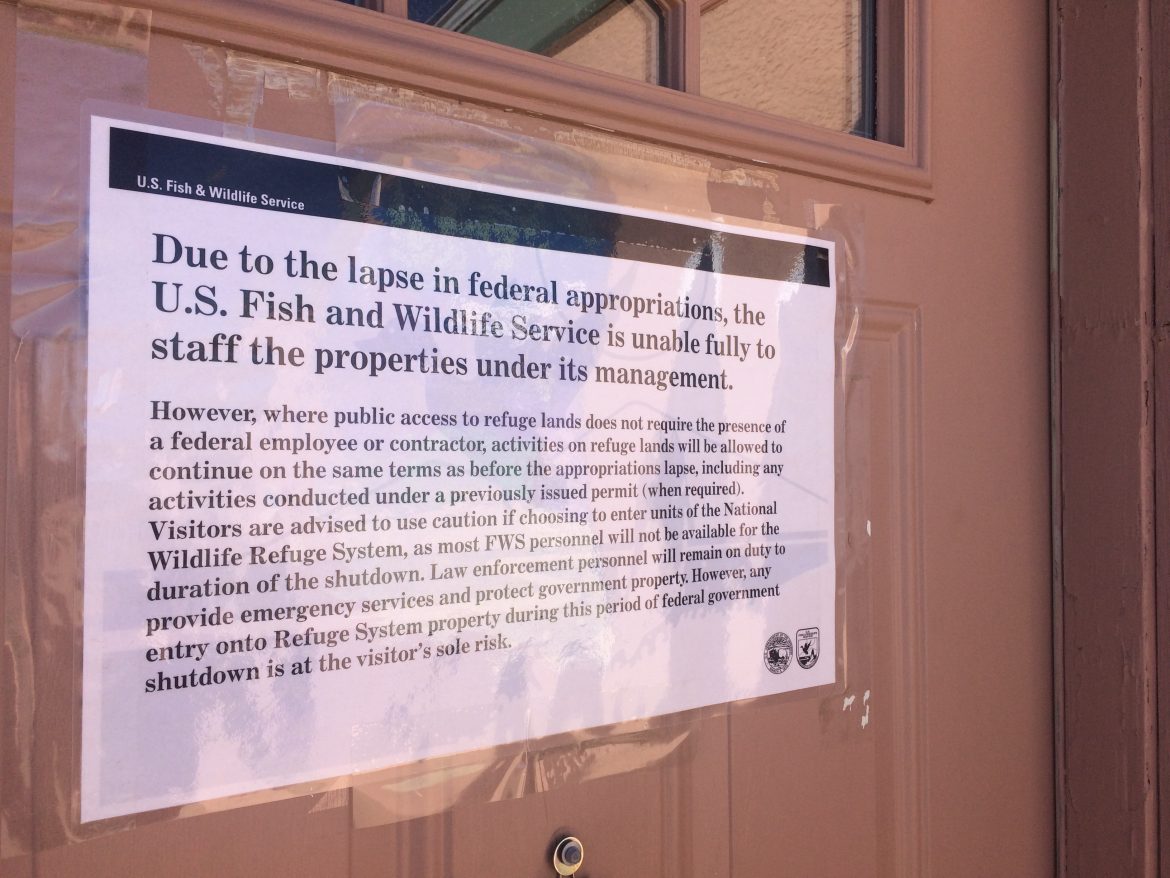 Last week, while New Mexicans orchestrated New Year’s Eve celebrations around snowstorm warnings from the National Weather Service (NWS), the agency’s meteorologists and forecasters were working without pay—and without any certainty about the future.

NWS is under the National Oceanic and Atmospheric Administration, which is part of the U.S. Department of Commerce. And NWS’ mission is to “provide weather, water and climate data, forecasts and warnings for the protection of life and property and enhancement of the national economy.” That means employees of the three field offices that cover New Mexico are considered “excepted” employees, explained Kerry Jones, a warning coordination meteorologist with NWS in Albuquerque.

Employees’ forecasts and weather warnings are essential, but they’ve had to forgo all other work—canceling meetings, tours and school visits—while at the same time paring down their social media outreach. Now, like some 800,000 other federal employees nationwide, they’re entering their second pay period without pay.

And those now working without compensation may be the lucky ones.

“Once the shutdown ends and the agency re-opens, staff at our office who worked during the shutdown are guaranteed backpay so eventually they will be compensated,” Jones said. “Those who were furloughed, there is no guarantee.”

Jones said some employees are having to negotiate with landlords, banks and mortgage companies: “Some are understanding, and some are not,” he said.

Just days before Christmas, the U.S. Senate passed a spending bill that did not include funding for a wall President Donald Trump wants to build along the U.S.-Mexico border. The federal government was partly shuttered as the calendar hit Dec. 22. It’s unclear when the shutdown might end, and late last week Trump threatened it could last “months or even years.”

The shutdown affects federal agencies such as the Department of the Interior, Department of Agriculture, Homeland Security and Health and Human Services. More than 5,800 New Mexicans have been furloughed or, like the NWS employees, are working without pay. Tribal governments and communities are disproportionately affected, due to the federal government’s role in everything from roads and law enforcement to education, health care and environmental programs. In addition, many federal contractors are out of work, and, across agencies, scientific work and planning projects have ground to a halt.

Meanwhile, the U.S. Bureau of Land Management has continued to process applications for permits to drill, ensuring energy development isn’t slowed on public lands. If the agency has issued any new permits in New Mexico, the state’s Oil Conservation Division should be receiving them this week.

“Specifically, this administration has shown us who they are really working for, keeping public lands open for drilling, but shut down for the public,” Udall told NM Political Report. “New Mexicans deserve economic certainty, a steward for our treasured public lands, and a federal government that works for them, not just for industry. I urge the president to stop holding government funding hostage, and work with Congress to end this shutdown immediately.”

Parks and refuges in NM

Unlike during past federal shutdowns, most national parks, monuments and other federally managed lands remain open to visitors, even though the lack of staff leaves natural and cultural resources unprotected. National media outlets have reported vandalism and trespassing at places like Joshua Tree National Park and Yosemite National Park, where a climber died on Christmas day.

New Mexico has been lucky so far—there haven’t been reports of major problems, nor of visitor deaths.

“We’ve been concerned in general that some parks are open with minimal staff,” said Ernie Atencio, New Mexico program director for the nonprofit National Parks Conservation Association. “There are not enough people out there to take care of visitors, and the resources and emergency services.”

In Big Bend National Park in Texas, he noted, visitors carried out an injured hiker after the large, remote park remained open, but without sufficient staff.

“I worked as a park ranger for many years, and I know that most people who work for the National Park Service are really dedicated to the mission, and they’re concerned about protecting these world-class, unique resources, whether archaeological or the natural landscape,” Atencio said. “Nobody’s getting rich working for the National Park Service, so they count on those paychecks. Especially over the holidays, this was a really rough thing to do.”

The shutdown also hurts gateway communities that rely on the economic boost that comes with providing food, lodging, gasoline and other amenities for visitors, Atencio said.

Meanwhile, at Bosque del Apache National Wildlife Refuge, a popular spot for birders and tourists, who come to see the tens of thousands of sandhill cranes and snow geese that winter in the 57,000-acre refuge in San Antonio, only one “essential” employee is allowed to report to work. The gates to the refuge are open, but the visitor’s center is closed.

“Thankfully, that I know of, people are being pretty good stewards out there,” said Deb Caldwell, executive director of the Friends of the Bosque del Apache National Wildlife Refuge. Caldwell and other volunteers have been monitoring the refuge and posting updates on the nonprofit’s Facebook page.

The public loses out when the visitor center is closed, she said. First-time or out-of-state visitors in particular want to know which spots within the refuge to visit, and they rely on advice from staff and volunteers at the visitors center.

And there’s so much more work behind-the-scenes that can’t be done—especially with just one employee, Caldwell said. Aside from picking up trash, cleaning and stocking the bathrooms, managing fires, ensuring public safety and keeping the roads clear and graded, refuge employees also manage the wetlands, knock down crops to feed birds, conduct scientific studies and help educate the public.

“What I think people don’t understand is you can have a magical experience out there, but it doesn’t happen by magic,” Caldwell said, adding that the refuge “does the work of a once-wild river.” Prior to major dams and developments along the Rio Grande, the river naturally provided habitat to the migrating birds and other wildlife. Today, it takes refuge employees growing crops, creating new wetlands and moving water within the refuge.

“There are a lot of people out there who make it all happen,” she said, “and it takes the whole staff working all during the week.”

Some trainings and meetings have been canceled, as well as some U.S. Environmental Protection Agency-led fieldwork, said Jennifer Hower, NMED’s general counsel. “Our daily interactions with EPA have ceased, but our federal grant awards are fine,” she said. In addition, there are currently eight applicants awaiting approval of their National Pollutant Discharge Elimination System permits, which in New Mexico, are issued by EPA rather than the state.

EMNRD’s communications director, Beth Wojahn, explained that the impacts are minimal at this point, but noted that the EPA is currently unable to direct cleanup work at the Questa mine, a Superfund site in northern New Mexico. “The Mining and Minerals Division is still monitoring that Superfund site,” she said, adding that the if the shutdown continues into the next funding cycle, the agency may have to use state money to fund some work.

Nonprofits that partner with federal agencies are also cancelling meetings and postponing planning for the new year.

“Obviously, at the beginning of the calendar year, that’s when you sit down, figure out what the goals are for the year,” said Aryn LaBrake, executive director of the Friends of Valle de Oro National Wildlife Refuge. “All those strategic meetings and all that planning have been pushed back

Valle de Oro is different from the traditional refuges that protect established wildlife habitat. In 2012, when a working dairy came up for sale, the U.S. Fish and Wildlife Service, in partnership with the community, local governments and nonprofits, bought the land just seven miles from downtown Albuquerque.

The shutdown is leaving not just the federal agency in a lurch, LaBrake said, but all the partners and neighbors who are working to restore the refuge.

Already this year, they’ve had to cancel a community engagement meeting, meetings about designing a visitors center and planning meetings for 2019. The refuge also relies heavily on the Rocky Mountain Youth Corp. When the latest cohort of 35 young people showed up to work this month, they were unable to get into their offices, and couldn’t do the planned labor on the refuge, such as invasive species removal, fence-building and prepping the property for future trail-building and restoration activities.

This is also an important time of year for funding. But federal websites are down and partners are unable to talk to grantors, even though many agencies, such as the EPA, have awards deadlines in February.

“We’re trying to move forward as much as we can, without that input from our federal partners,” LaBrake said. “But working with those individuals, we know they truly are civil servants, many times living paycheck-to-paycheck.”