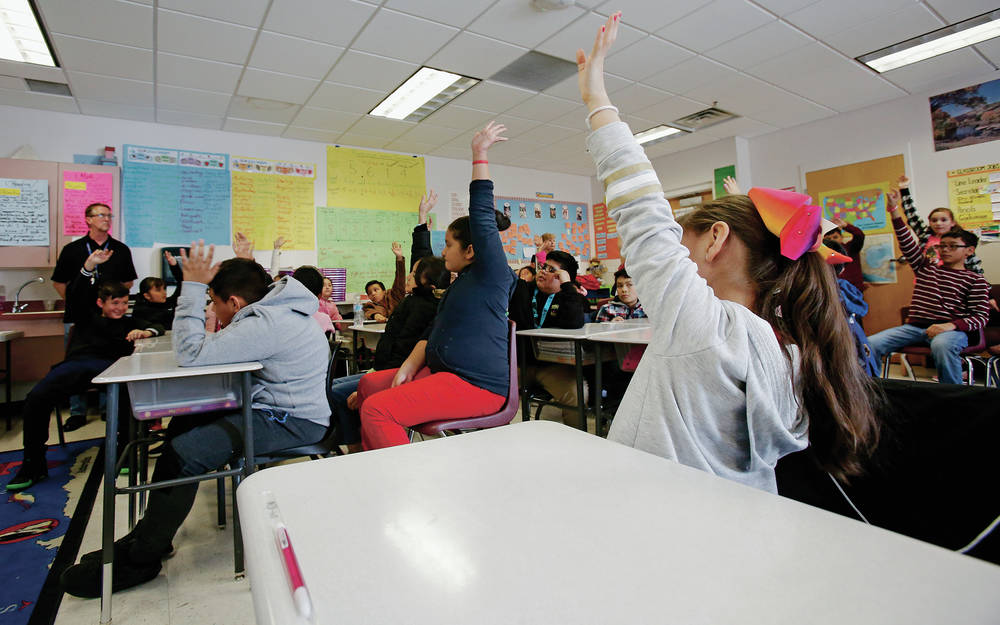 Lyssette De Santiago thought about the question only for a moment before her hand shot toward the ceiling.

The dark-haired fifth-grader at Sweeney Elementary School didn’t need much time to think about an issue that likely will vex legislators, teachers, parents, education advocates and taxpayers in the upcoming 60-day session of the New Mexico Legislature.

Her teacher asked: How would she spend a projected $1.1 billion in new oil and gas revenue to improve public education?

“Spend it on notebooks,” Lyssette answered. “Because sometimes parents don’t have enough money to buy them for their kids.”

Hire more counselors to help them prepare for college — which just about every kid in the class said they wanted to attend.

From the mouths of babes … comes the key issue of the 2019 session of the New Mexico Legislature, where a perfect storm of happenstance, jurisprudence, statistics and electoral math will fuel what many people agree is the biggest issue facing the state.

“Education is going to be at the front and center of this legislative session,” said Lt. Gov. Howie Morales, a former state senator and educator. “The governor has made it clear that this is a priority for her, and we know everything from economic development to the quality of life to the overall well-being of New Mexicans is linked to education.”

New Mexico has seen many Year of the Kid efforts, most recently under Gov. Michelle Lujan Grisham’s two predecessors, Bill Richardson and Susana Martinez. But against the backdrop of a one-year rise in revenue and a court-ordered mandate to improve K-12 education, particularly for children like De Santiago, there’s pressure like never before to do something that matters — and something that lasts.

District Judge Sarah Singleton’s ruling in the Yazzie/Martinez v. State of New Mexico case in June, and amplified by her final order in late December, laid out all the ways in which the state has failed its children in supporting public education. Singleton gave the governor and legislators until April 15 to come up with a remedy for those ills.

The judge, however, did not assign a price tag to her order, leaving that to lawmakers to figure out.

That legal impetus, many education advocates say, simply adds lighter fluid to a cause that’s been smoldering for at least eight years. Their target: An estimated $1 billion-plus in extra revenue to factor into the equation.

On Thursday, Lujan Grisham released her proposed budget for fiscal year 2020, increasing public education spending by some $500,000 for a total of about $3.3 billion, or roughly 46 percent of the overall $7.1 billion budget. That funding includes money for raises for all school employees, expanded prekindergarten services and mandatory expanded summer school programs for about 300 struggling schools.

The Legislative Finance Committee will unsheath its budget Monday.

Some legislators see the surplus as one-time manna from heaven that won’t fund recurring expenses. Sen. John Arthur Smith, D-Deming, a leader of the powerful Senate Finance Committee, said the state needs to prioritize that funding for a lot of other “back-filling” projects that have languished over time.

Lujan Grisham’s budget, for example, includes $300 million to pay off a backlog in film tax credits and bolster financing for the state’s health care fund.

“There’s going to be a lot of focus on public education, and I think you’ll see a lot of money go into that direction,” noted Sen. Craig Brandt, R-Rio Rancho. “But I hope it goes with some accountability. If we pour $400 million more into public education and there is no accountability, I think we’ll see in four years that we’re in the same position, with no better results for our students and having spent all that money for nothing.”

Sen. Steven Neville, R-Farmington, said that while he supports higher pay for teachers, increased pre-K programs and longer school years — all measures cited as potential game-changers for students in the Singleton decision — he hopes any additional funds flowing into school districts do not go into increasing administrative costs.

It’s a fear echoed by many who are skeptical of past failures, even in years when the state was flush.

Still, lawmakers from both major political parties agree education will be perhaps the most important thing to come from this session, as do educators, the heads of teacher unions and attorneys representing plaintiffs in the Yazzie/Martinez lawsuit.

“The Legislature and the governor have an opportunity to make the education system function again, to make it work for students and especially for at-risk students,” said Eric Herrera, an attorney for the Mexican American Legal Defense and Educational Fund, which represents one of the plaintiffs in the court case.

Morales, put in charge of the Public Education Department by the governor while she searches for a Cabinet secretary of education, said lawmakers will need to look beyond reforming education and work to “transform” it.

“There’s still a lot of challenges we are going to face,” he said, particularly since Lujan Grisham already has laid out a list of priorities to pursue.

Lujan Grisham’s targets include filling teacher vacancies, paying educators more money and staffing schools with nurses and social workers to offer so-called wraparound services to struggling students. They seem to dovetail with the suggestions made by the fifth-graders in Sweeney teacher Kevin Mccullough’s class.

For several years, New Mexico advocates for children have said the key to improving the state’s educational numbers means investing in kids before they ever get to kindergarten.

Toward that end, a big part of Lujan Grisham’s education plan is to make a five-year, $285.5 million investment in early childhood education by drawing more money from New Mexico’s multibillion-dollar state land endowment.

Advocates argue such early childhood education programs better prepare students for kindergarten, increase academic proficiency rates and cut down on the dropout rate. Legislation has been filed to do just that, but whether it meets the approval of more conservative Democrats and Republicans on the Senate Finance Committee, which has repeatedly nixed that plan, is unclear.

Also uncertain are the effects of decisions the governor already has made.

Revamping the state’s standards-based assessment tests, the A-F school grading system and the controversial teacher evaluation plan formed under the Martinez administration might be relatively easier tasks, but still bring about their own challenges.

For example, it took Lujan Grisham seconds to dismantle the unpopular statewide reading and math proficiency testing called PARCC in an executive action in early January; at the same time, she issued an order for the state to come up with a new teacher evaluation system, one that relies much less on student test scores. But the state’s plan to fulfill requirements under the federal Every Student Succeeds Act has been endorsed by the U.S. Department of Education; the governor will have to work quickly with federal authorities to ensure any new teacher evaluations and student exams are approved by the end of the school year.

Since the Legislature approved the state’s A-F school grading plan, it will take legislative action to change it, Morales said.

One action that seems destined to happen, lawmakers from both parties say, is funneling more money into the state’s per-student funding formula, known as the State Equalization Guarantee. Lujan Grisham’s budget proposed an extra $113.32 million to increase allocations in the formula for low-income and special-needs students, English language learners, and others considered “at risk.”

“Lots more money is going to flow through the SEG… which means districts with at-risk students are going to see a larger portion of the SEG pie, and with that additional money, the SEG pie itself will get larger,” said Sen. Bill Soules, D-Las Cruces.

Nevertheless, Republican lawmakers, as well as conservative Democrats, caution the state does not have a never-ending stream of money to spend and that any new funding for public education must come with accountability strings attached.

It’s unclear if the governor’s push for more money in her budget is enough to meet the mandates of the lawsuit. Late last week, attorney Gail Evans, who represents one body of plaintiffs in that court case, said she isn’t certain the Legislature will invest enough money in public education to satisfy Judge Singleton.

Neville said he believes legislators are going to have to respond to the lawsuit’s charge of specifically addressing the needs of the state’s impoverished, Hispanic and Native American students, who often fall deep into an achievement gap when judged against schoolmates from more affluent backgrounds. Lawmakers also will have to wrestle with finding ways to deal with the external factors that impact student learning, such as poverty, he added.

“How do we address the social and cultural issues that cause us problems with education?” he said. “I don’t have an answer to that. And somehow or other we have to figure out what it is going to take to appeal to so many diverse cultures. New Mexico has so many different cultures that it’s going to be hard to find a ‘one-size-fits-all’ fix.”

And if the big-picture and big-impact items weren’t enough, it’s likely public education will be the focus of many other initiatives as well: Money for installing seat belts on school buses, school security, after-school programs. What to do about technical and trade education?

All of those wants could cause some infighting, even among allies, Soules said, but that’s just politics as usual at the Roundhouse.

“There’s a fight for one thing or another,” he said. “You have to vote ‘yes’ or ‘no’ on everything. You’re either on the winning side or the losing side. We are already seeing people ask, ‘Why aren’t we pushing harder now, why can’t we change things right away?’ We always start a session with that kind of contention.”

Perhaps, but the future of education is now. And nowhere was that more evident than in Mccullough’s classroom at Sweeney Elementary as students continually pitched ideas to make schools better.

“Buy everything that helps you to learn,” one boy said, perhaps best summing up the state’s students’ needs. “Buy better knowledge.”