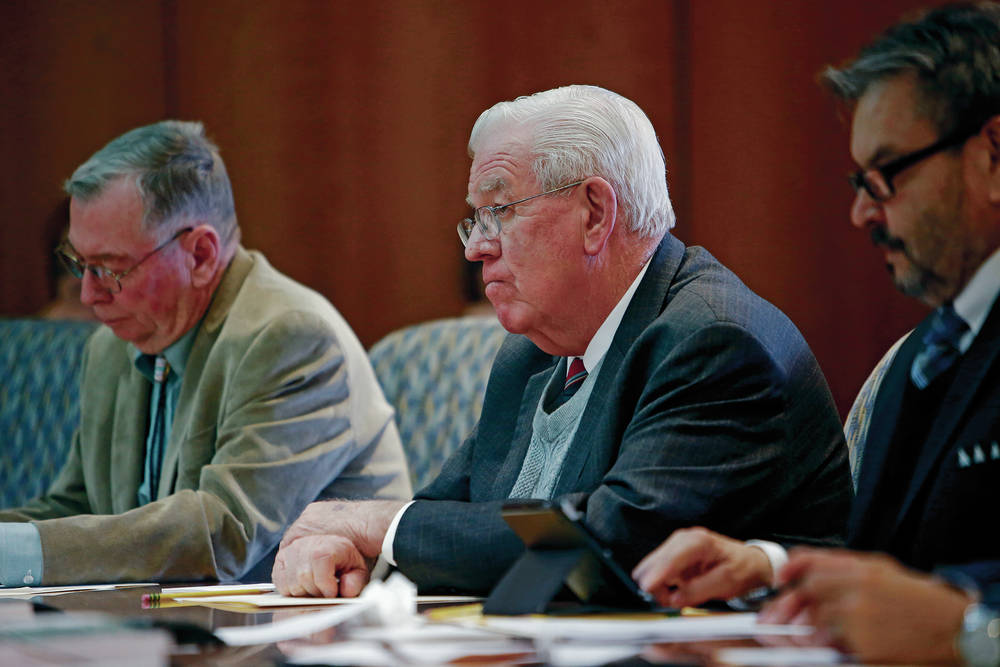 John Arthur Smith, D-Deming, sits in the final Legislative Council meeting before the beginning of the session at the state Capitol on Monday, January 14, 2019. The 60-day legislative session begins January 15.

It is the New Mexico Senate versus everybody.

But maybe the biggest question of the 60-day legislative session that begins at noon Tuesday is just how much that will matter when the state Senate takes up some of most contentious issues of the year, from marijuana to gun control and funding for education.

There will be more than enough votes in the House of Representatives to pass some of the bills that liberals view as priorities and that Gov. Michelle Lujan Grisham campaigned for. But some of those same bills might lead to tight votes or no votes at all in the Senate, where moderates and conservatives still hold sway.

“They see themselves as the bulwark against rapid change,” said Sen. Jerry Ortiz y Pino, D-Albuquerque, who wants to legalize recreational marijuana.

It’s a sudden role reversal for the chamber that was only a couple of years ago the last obstacle to Republican Gov. Susana Martinez’s agenda when her party also controlled the House.

For some lawmakers, it is the Senate’s job to challenge the governor, no matter the party. And they see the chamber as a check on not only the executive branch of government but the House, too, where members are up for re-election every couple of years and seats change hands more regularly with the whims of public opinion.

“The culture in the Senate is a lot different than the House,” said Sen. Steven Neville, R-Farmington.

To others, though, the Senate is simply out of touch. Liberal members and activists alike worry the chamber’s leaders won’t be responsive enough to the mandate that voters handed Lujan Grisham in 2018 and will instead pull against the rest of their own party.

This legislative session will probably not settle that debate. But the coming days are bound to stir it up again.

“That’s where the fight between the governor and the Legislature is going to happen — is with the Senate,” said Eric Griego, a former senator who now is executive director of the New Mexico Working Families Party, a liberal advocacy group.

For him, memories are still fresh of another blue wave a decade ago when Democrats — including him and others on the left — won big but moderate or conservative members of the party still held a lot of clout in the Senate.

Two very different political pressures are at work in the Senate this year.

On one hand, plenty of Democratic senators — including some of the most influential — represent rural districts that they say are moderate or even conservative compared to the rest of the party.

Senators were not up for re-election in 2018. They will not be on the ballot again until 2020. But the House elections last year showed that, while Democrats can sweep an increasingly blue place like Albuquerque, they are at risk of losing ground in rural areas. In fact, the only seat the Democrats lost in the House last year was in Eastern New Mexico.

And liberal Democrats ousted a few relatively moderate or conservative members of their own party in primaries last year, too.

In turn, liberal Democrats are preparing to take on conservatives in the Senate.

“Unless these guys have a change of heart in their voting behavior, they will absolutely face a primary challenge,” Griego said.

It is no idle threat. The group was integral to some of the most vicious primary battles in state House races last year.

All of this leaves the specter of yet more intraparty electoral warfare looming over the legislative session.

For an example of what Griego is talking about, though, look no further than the ongoing debate over taking a larger share of the state’s Land Grant Permanent Fund to pay for education.

The state currently takes 5 percent of the $18 billion endowment each year to help fund public schools.

Liberals and a range of advocates for expanded access to early childhood education, including the state’s three Catholic bishops, have argued for increasing that to 6 percent a year.

Boosters say that amount of funding would be enough to make a difference in a state where one in three children lives in poverty. Lujan Grisham has endorsed using at least some larger portion of the fund. And advocates contend it is nothing short of immoral not to put more of the robust endowment to immediate use.

But budget hawks have long opposed the idea, arguing it would lead to the permanent fund’s depletion and in turn leave schools without a reliable stream of revenue in the future.

A resolution that would let voters choose for themselves has stalled year after year in the Senate Finance Committee.

The Finance Committee is chaired by Sen. John Arthur Smith, D-Deming, who is fiscally conservative and long skeptical of the proposal to take more money from the permanent fund. Smith calls the proposal irresponsible.

And the longtime lawmaker not only has a perch on an influential committee but the deference of other Senate Democrats. He has been in office for 30 years, after all, and probably knows the state’s finances better than any other sitting lawmaker. There are higher-ranking senators, such as Majority Leader Peter Wirth, of Santa Fe. But Smith’s position means his hands are tightly on the state’s purse strings.

There are other issues, too, of course.

Ortiz y Pino supposes that legislation to legalize recreational marijuana will depend in large part on which Senate committees vote on it.

The bill might have a chance in the judiciary or public affairs committees, the latter of which he chairs.

But if Senate leaders steer it towards the Corporations and Transportation Committee, chaired by Sen. Clemente Sanchez, D-Grants, Ortiz y Pino expects the bill would be as good as dead.

Presented with the proposition that the state Senate will be the key battleground when it comes to issues such as marijuana, gun control and the permanent fund, Smith quickly volunteered another: “The film tax credit, too.”

Smith was referring to Lujan Grisham’s proposal of scrapping the annual $50 million limit on tax credits for the film and television industry. Boosters say allowing the state to pay more such incentives each year will draw more productions to New Mexico. But Smith and other fiscally conservative lawmakers fear it would make the state’s budget all the more unpredictable.

Smith said Monday afternoon he had not discussed the permanent fund with Lujan Grisham.

“I’ll remind her we have $1 billion,” he said, referring to the state’s current windfall of oil and gas revenue and suggesting the arguments for using a greater share of the fund have not swayed him.

Smith said he has campaigned for years on using the state’s money responsibly and efficiently.

And no, he does not seem particularly worried about challengers from his own party.

Critics have backed primary challengers to Smith in the past, such as in 2012.

Smith is still in office and, at age 77, he is as powerful as ever.