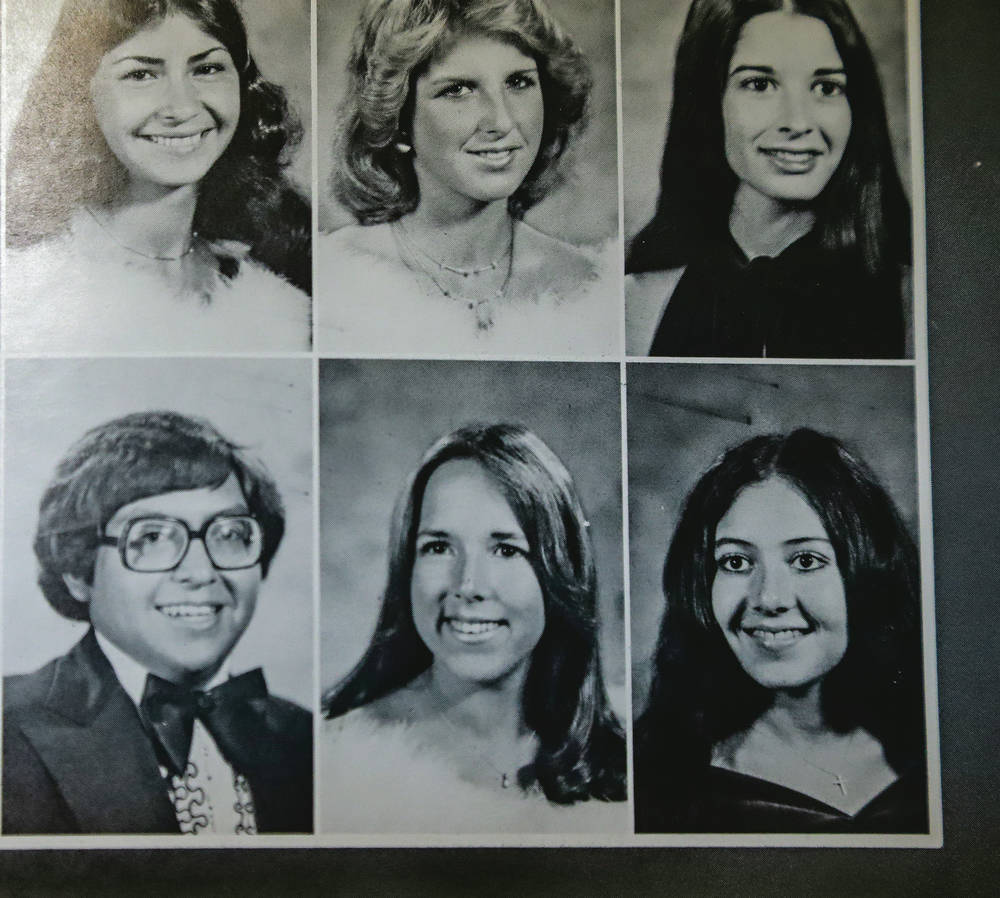 Mrs. Kirby’s second-grade class at E.J. Martinez Elementary School was already in session when the door swung open that spring day in 1966.

Accompanied by an adult, a petite girl with sandy brown hair, sparkling green eyes and a checkered skirt walked in, immediately capturing the attention of a classroom full of inquisitive children.

“I just remember her looking around the classroom, so curious,” recalled Matthew Baca, one of the students. “Not at all any kind of nervousness or any kind of wariness, but just curiousness, looking around at all the children, watching us. She was just at ease right away.”

The second-graders had no way of knowing then, but the confident little girl would be the future governor of New Mexico.

Michelle Lujan Grisham, a former Bernalillo County commissioner and U.S. representative who was sworn in Jan. 1 as the state’s 32nd governor, was born in Los Alamos and raised in Santa Fe in what friends described as a working-class family.

Her late father, Llewellyn “Buddy” Lujan, was a well-respected dentist who provided free dental care to disabled and underprivileged children and their families from a dental chair in his garage.

“He never turned anyone away from that chair,” Lujan Grisham said in her inauguration speech.

Her mother, Sonja, was a housewife who raised three children, including Lujan Grisham’s disabled sister, Kimberly, who was diagnosed with a malignant brain tumor at age 2 and died at 21. According to published reports, Lujan Grisham’s parents spent decades paying off the debt they incurred for their daughter’s health care costs.

While her life in government and politics is relatively well documented, not much has been written about Lujan Grisham’s younger years growing up in Santa Fe, where longtime friends and former classmates say she displayed traits and characteristics of a natural leader who also has a fun streak.

“She was one of the brainiac types,” said Joe Gentry, who graduated from St. Michael’s High School with Lujan Grisham in 1977.

“She was naturally gifted in terms of academics, and there were a few people that you knew they were going to do something with their lives,” Gentry added. “And then we went to St. Mike’s, so there was an expectation over there almost of going on to do bigger and better things. But being governor? I don’t think anyone could envision that. Maybe she did. I didn’t envision that, but I knew that she could do great things.”

The governor — who had a lot on her plate last week, from unveiling a proposed $7.1 billion budget for the coming year to traveling to the state’s southern border with Mexico — was unavailable for an interview. But in a statement, she said Santa Fe helped mold her.

“I was fairly young when we moved to Santa Fe, but it wasn’t long after that I started to figure out who I was, and that entire process took place in this city,” she wrote.

“I was a practical joker as a teenager and I still am today — you can ask any of my staff,” Lujan Grisham said. “I think growing up in Santa Fe or Northern New Mexico in general instills a sense of humor in people, a sort of easygoing sense of not taking yourself too seriously, while still being very proud of where you come from, and that’s something we all share. But I also knew my parents were deeply connected to this community and had a real sense of community and looked out for their neighbors — I wanted to make them proud.”

Trying to find people to say different things about Lujan Grisham is about as challenging as asking them to use different ways to describe the sun.

Lujan Grisham is, in some ways, New Mexico’s Energizer Bunny. And she started young.

“God, that girl, I don’t know how she gets everything done in a single day,” said Annette Montoya, who went to high school with the governor and has volunteered on some of her campaigns. “By 9 o’clock, I’m exhausted when I hang out with her.”

Montoya said Lujan Grisham was “always a fun, fun girl to be around” in high school. She recalled an incident in which the diminutive future governor faced off with a state wrestling champion.

“I have a cousin that was a wrestler for the St. Mike’s wrestling team, and he took state every single year. He was the heavyweight wrestler,” Montoya said. “He’s now the mayor of Taos, Dan Barrone. He must weigh about 300 pounds, and Michelle must weigh about 100 wet, and they were having this little argument in the hallway and she was pointing her finger at him, telling him stuff, and he’ll never forget that argument that he got in with Michelle. Of course, she won.”

Lujan Grisham’s longtime friends agreed the governor was — and still is — a prankster.

“The first time that I spent the night at her house, I was walking into her kitchen, and she just hit me [on the head] with an egg and then we had this huge food fight in her parents’ kitchen,” said Priscilla Catanach Gaussoin. “We were throwing spaghetti at each other.”

The pair cleaned up the kitchen and then had to take a bath because they were so grimy, Catanach Gaussoin said.

“The next day, her mom said, ‘Why is there spaghetti in the bathtub?’ She goes, ‘I don’t know. How did it get there?’ ” Catanach Gaussoin recalled, laughing.

Catanach Gaussoin said Lujan Grisham was in the National Honor Society. She was also a cheerleader in eighth grade and later a member of the drill team, also known as the Drillettes.

She displayed some impressive dance moves on the campaign trail and also at her inauguration ball, but another friend, Liz Wray, said dancing didn’t come naturally to the governor in high school.

“We would laugh at her so much because she wouldn’t get the moves, and she would just crack up,” Wray said. “But when it came down to it, we got it down and we got our little white boots on and did our little kicks out there for the St. Mike’s Horsemen. She was not a natural, no. She would tell you, too.”

Wray and Catanach Gaussoin said they’re part of a group of St. Mike’s graduates who have remained close friends with the governor since high school. They all attended the governor’s swearing-in ceremonies.

Wray, who is also part of the group of six, said her first memory of the governor is riding the bus with her to school their freshman year.

“There’s this little thing entertaining the whole bus,” she said. “She’s just a pistol. She’s just fun to be around.”

But it wasn’t all fun and games. Wray said Lujan Grisham also was ambitious.

“There’s a thing called Block M,” she said. “You have to do community service. You have to have good grades, and you have to be in clubs and be of service to the school and the community. Her strive was always to get the Block M.”

Wray, who remembers going to an Eagles concert with the governor and her other friends, said the group was strait-laced.

“In those days, there wasn’t really much to do, you know what I mean? There was only that one McDonald’s on Cerrillos Road. You went from that McDonald’s to the Plaza and back to that McDonald’s,” she said. “I guess we were a bunch of goody two-shoes now that you’re making me remember.”

Wray said she didn’t expect Lujan Grisham to get into politics.

“But I remember when we were in speech, I sure wanted to be on the debate team on her side because she was good,” Wray said. “She can debate either side.”

Time for fun, time for work

Baca, who has known the governor since elementary school, said he always figured Lujan Grisham would be successful. He said the first time he got an inkling she was interested in politics is when they carpooled between Santa Fe and Albuquerque. At the time, Lujan Grisham served as the director of New Mexico Agency on Aging, and Baca was deputy Cabinet secretary of the New Mexico Energy, Minerals and Natural Resources Department.

“We had a lot of time to talk and visit about things, and I realized this person sitting here is certainly something unique in terms of what she has to offer to our state and to the country, really,” he said. “She has a very high intellectual capacity that allows her to comprehend complex issues and then to dissect those issues and determine the best ways that you can go about addressing them, especially when these issues are ones that are problems in society.”

“I can say without reservation that she’s going to be, from the very first, one of the very best governors we ever have,” Baca said. “That’s not just because of my personal friendship. That’s knowing her and her capabilities and all the different aspects she brings to the job.”

Baca said Lujan Grisham is a hard worker. When they carpooled, he remembers “arriving in Santa Fe at 8 and not leaving until almost 12 hours later.”

“I’ve never seen anyone work as long and as hard as she does,” he said. “I think anyone who is going to be in her administration had better be prepared for an environment where they’re going to be giving their all to carry out the policies and goals that she’s going to set for them.”