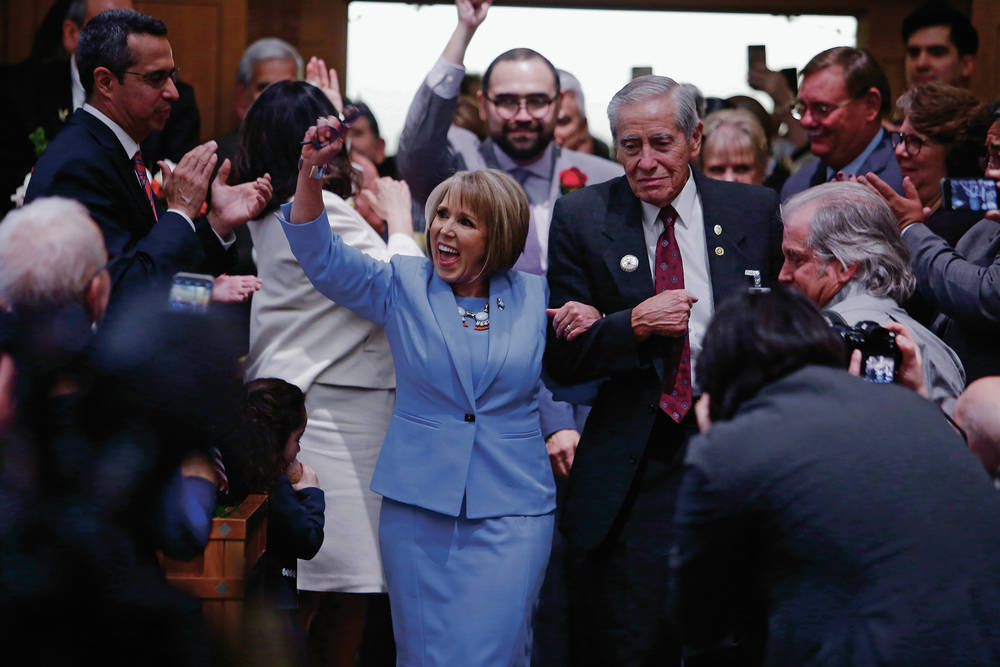 Gov. Michelle Lujan Grisham before giving her 2019 State of the State address.

The new Democratic governor used her first State of the State address to double down on a series of liberal priorities she made the centerpiece of her campaign, arguing New Mexico should seize what she described as an opportune moment as it sees a windfall of oil revenue — and the ascent of new political leadership.

Standing in front of the most diverse House of Representatives in statehistory, Lujan Grisham urged New Mexicans to “get excited, stay excited, get active and stay active.”

“This moment is greater than the state of our budget, or any of the numbers that suggest we can now begin to make the transformative investments our schools, our economy and our communities have always deserved,” she said in a 50-minute address. “I believe this is an opportune moment, perhaps the greatest moment of opportunity in the history of this state, because we have the strength, and the vision, and the willpower to deliver together.”

Charging into the session from a 14 percentage-point election win, Lujan Grisham offered at once a sharp contrast to her predecessor, Republican Gov. Susana Martinez, and a direct challenge to GOP lawmakers who were quick to argue that her plans represent a big expansion of government’s scope and government spending.

Lujan Grisham repeated her call to put $500 million into education, including by giving teachers a 6 percent raise and increasing pre-K enrollment by 80 percent in five years.

The governor also called on lawmakers to pass legislation that would ban anyone convicted of assault from possessing or purchasing a firearm.

It was unclear whether she was referring to what New Mexico law defines as assault — the threat of violence, rather than an actual act of battery. But the proposal was a departure from the governor’s inaugural address, when she did not mention firearms once in a list of priorities.

Lujan Grisham went on to argue for tighter background checks on firearms buyers and laws that would require better safekeeping of weapons.

Some of these lines got loud applause from the Democratic side of the House. But Republicans sat still at the mention of guns. Moderate Democrats also may oppose some of the measures Lujan Grisham pushed.

Though she did not call for legalizing recreational marijuana, Lujan Grisham did say she would direct the state Department of Health to accept an advisory committee’s longstanding recommendation of adding opioid addiction to the qualifying conditions for New Mexico’s medical cannabis program.

And Lujan Grisham urged lawmakers to repeal an old but currently unenforceable state law that makes abortion a crime.

“Let us show the women of this state that we will not allow faraway federal judges to determine autonomy over their bodies,” Lujan Grisham said.

The governor called New Mexico’s $7.50-an-hour minimum wage a “poverty wage” and called on lawmakers to raise it to $10 immediately. One piece of legislation, House Bill 31, would later raise the minimum wage to $12 an hour and subsequently adjust it annually based on inflation.

Lujan Grisham pledged to join the U.S. Climate Alliance, a group of governors who have committed to upholding the Paris Climate Agreement. And the governor said she will direct each state agency to develop a plan for responding to threats posed by climate change.

“We know we cannot rely on the federal government, right now, to lead on climate action,” she said. “It is our responsibility and indeed our moral obligation to ensure our planet and our state are preserved for our children and their children.”

Lujan Grisham said she wants to double funding for the Local Economic Development Act, an incentive program popular with lawmakers on both sides of the aisle. And she wants to market the state to more tourists, particularly by highlighting the outdoors.

But when it came to economic development, Lujan Grisham was clear that film and television will be a key industry. She repeated her call to end the $50 million limit on tax credits the industry can claim each year. And Lujan Grisham again said she wants to pay off this year a backlog of credits totaling upward of $250 million.

For Democrats, the speech was a refreshing change after two terms of the Martinez administration.

Lujan Grisham’s address was an almost breakneck pivot to Democratic priorities that for the most part could not be more different from those of her predecessor in tone and ideals.

“It seems like the last years, we’ve been looking down and back. Now, there’s a lot of positive energy. It’s a message looking up and out,” said state Sen. Bill Soules, D-Las Cruces.

The governor signaled she does not want to waste time, imploring lawmakers to send her the “rocket docket” — a list of bills the Legislature has passed in recent years with broad support but which Martinez vetoed. House and Senate leaders plan to fast-track these bills through the committee process and get each to the governor’s desk by the session’s third week.

But in the governor’s address, Republicans saw a boom in government spending and the scope of government.

Montoya cautioned the state’s financial fortunes could change with the whims of the energy markets.

In turn, he said, the state should view it’s anticipated budget surplus as one-time money that may not be around in the future.

Ticking off a list of pledges and proposals from the governor’s address, Minority Leader Jim Townsend, R-Artesia, argued the state’s anticipated budget surplus would be “gone in a flash.”

Montoya said GOP lawmakers could find allies among some Senate Democrats who may also be skeptical of Lujan Grisham’s proposed budget.

Republicans signaled they are open to working with the new governor on infrastructure in particular.

The Legislative Finance Committee’s budget, released Monday, calls for using $600 million in cash on brick-and-mortar projects such as roads and bridges.

But otherwise, many Republicans were wary Tuesday.

“We have 60 days,” Montoya said, “and from what I’ve heard, we’ve spent the budget surplus three times over.”