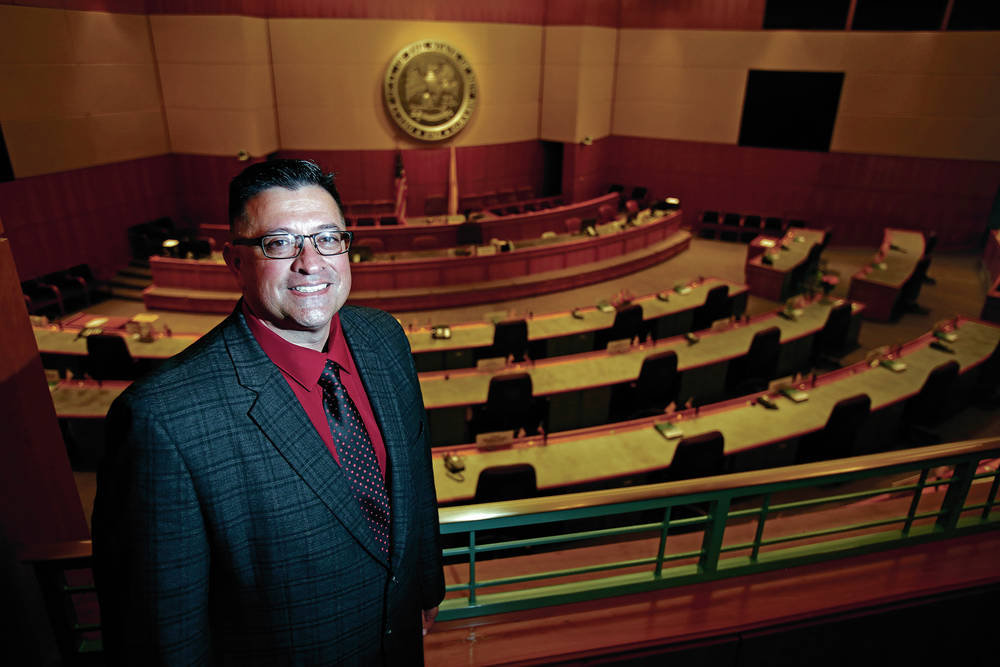 Gabriel Ramos, a Silver City Democrat named by the governor to fill the Senate seat vacated by Lt. Gov. Howie Morales, poses in the Senate chamber at the Capitol on Wednesday, Jan. 16, 2019.

Getting elected governor of New Mexico by 14 percentage points doesn’t mean you’ll get everything you want in Silver City.

Lujan Grisham had asked over the weekend that the counties give her additional names of potential candidates, arguing state law appears to require each county nominate different possible successors. But county leaders across the sprawling district stood by Ramos, a Democrat, as the legislative session began this week and Morales’ old seat sat empty.

While Ramos enjoyed the backing of the boards of commissioners in Grant, Catron and Socorro counties, environmentalists argued he has been too supportive of the Central Arizona Project and some Democratic activists said he is too conservative. In turn, a small campaign flared up mostly behind the scenes at the Capitol to oppose his installation in the Legislature’s upper chamber.

With no other options, however, the Democratic governor told Ramos on Wednesday she would appoint him to the post.

The insurance agent and former Grant County commissioner expects to take his place in the Legislature on Thursday.

Ramos had already traveled to Santa Fe, watched the governor’s State of State address on Tuesday and said on Wednesday that he was looking forward to working with her.

“I’m excited to get to work, particularly on education,” he said.

In fact, Ramos will get a seat on the Senate Education Committee and will co-chair the Senate Indian and Cultural Affairs Committee.

But it was Ramos’ support for the Central Arizona Project that spurred the ire of environmentalists who wanted to scuttle his appointment.

The Central Arizona Project has been working on plans to divert the Gila River in New Mexico — an intensely controversial idea for what remains a wild river as it wends through the southwest part of the state.

And more broadly, some argued he would be too conservative in a year when some of the most contentious priorities for liberals will come down to tight votes in the Senate.

“A lot of us feel that if you look at the definition of a DINO — Democrat In Name Only — there’d be a picture of Gabe Ramos,” Larry McDaniel, a Democratic activist in Silver City, said earlier this week.

Still, all three boards of county commissioners in the district nominated Ramos and only Ramos. A couple of commissioners in Grant County backed a different choice, but not a majority of the board.

That appeared to raise its own concerns for the new Democratic governor.

When a legislative seat is left empty and the district includes more than one county, state law calls on the counties to nominate possible successors for appointment by the governor.

Lujan Grisham sent an email over the weekend to counties in the district noting that state law says each county should submit one name and that the governor is supposed to pick from the list of names. The governor’s office asked that each county submit the name of a resident.

Ramos lives in Grant County and all eyes fell on Socorro and Catron counties to come up with another nominee.

But no one budged.

The Socorro County manager confirmed Wednesday that her board sent a letter to the governor reaffirming its support for Ramos. Catron County did not schedule any additional meetings.

The governor and Senate leaders have stayed out of the public dispute around Ramos’ nomination. Lujan Grisham told reporters on Monday that she had not ruled out appointing him but merely wanted to keep within the spirit of the law.

Senate Majority Leader Peter Wirth, D-Santa Fe, said Wednesday, “Whoever is appointed will be welcomed in the Senate.”

For a brief moment, the ordeal raised the specter of a constitutional dispute.

Wednesday’s appointment, though, brings a resolution to the debate — at least for now.