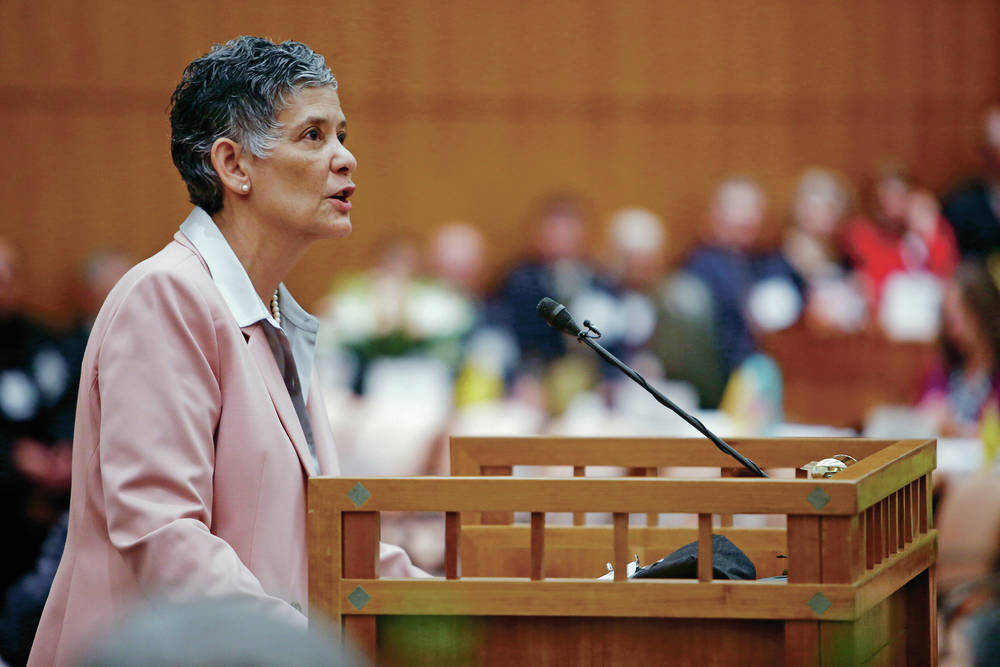 State Supreme Court Chief Justice Judith Nakamura told a joint session of the New Mexico Legislature on Thursday the state’s justice system, which her predecessor described in 2017 as a patient on life support, is beginning to breathe on its own.

Nakamura said funding appropriated over the past two years means the judicial branch can now pay Magistrate Court rents without worry and no longer loses employees to better paying jobs to discount retail stores such as Wal-Mart and Target. And, she said, a new jury management system has resulted in savings that mean jurors are paid in a timely fashion for the first time in eight years.

“Are our courts thriving?” Nakamura said. “Not yet. But we are no longer operating in a continual state of crisis. This small bit of breathing room has given court leaders an opportunity to pause, reflect, and consider the future of our judicial branch.”

Nakamura said the judicial system now can focus on things like attracting more and better judge candidates by increasing pay and reducing the role of politics in their selection — and making sure they are well trained.

She said money to train judges comes from fees collected on traffic citations, which have declined by about 31 percent in the past eight years. So, she’s asking the Legislature for $650,000 to “expand and modernize judicial education.”

The chief justice also asked lawmakers for $450,000 to expand a pilot program used by companies such as eBay and PayPal which allows litigants to resolve money-due cases quickly through an automated negotiation process. She also asked legislators to allocate $550,000 in recurring funds to expand an early-assessment program that helps courts decide which non-violent offenders can safely be released into the community pending trial.

Nakamura renewed a longstanding request that lawmakers set aside $1.8 million to purchase redaction software which would allow court records to be made available to the public online.

Even if the Legislature were to grant all of her financial requests, Nakamura said, the judiciary’s share of the state budget would amount to a “minuscule 2.55 percent, down from our equally minuscule 2.68 percent.”

Nakamura also urged support of legislative proposals that would allow cities and counties to streamline the judicial process by combining the work of certain types of courts.

Notably absent from Nakamura’s remarks was any mention of the overburdened statewide Law Offices of the Public Defender, whose leaders have said for years their caseloads are so great they struggle to deliver constitutionally adequate defenses to the thousands of indigent New Mexicans who qualify for representation by a public defender.

Funding for the Law Offices of the Public Defender is separate from that of the Administrative Offices of the Courts, but Nakamura’s predecessor, retired Justice Charles Daniels, highlighted the issue in his 2017 address as something that threatened to reduce the state’s laws to mere “words on paper.”

Nakamura opened and closed her speech by reading letters from former addicts grateful for their interaction with a court system that helped them reorder their lives. But she did not mention any new initiatives aimed specifically at addressing substance-abuse related crimes, which some attorneys say are seriously clogging the system.

Nakamura did say existing specialty courts — including mental health and drug courts — are ensuring defendants are “staying engaged in their communities, becoming more productive citizens and not committing new crimes.”

Administrative Office of the Courts spokesman Barry Massey provided data showing defendants who go through one of the specialty courts re-offend at lower rates — between 6 percent and 32 percent, depending on the type of crime — than the state average of about 50 percent.