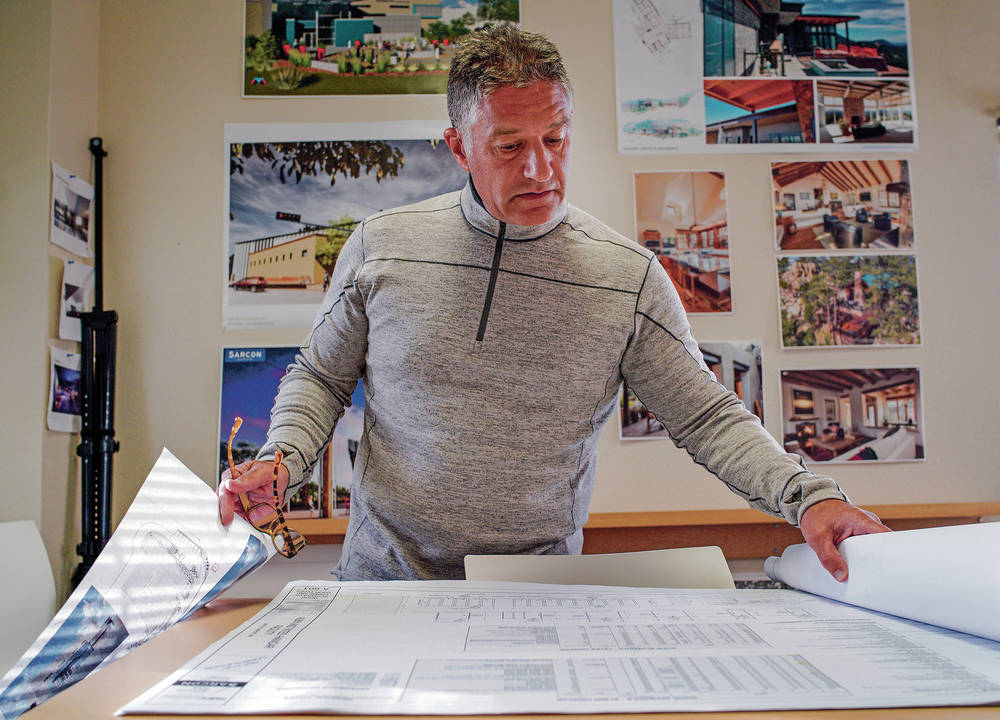 Peter Brill, president of Sarcon, looks at blueprints for the Spectra Hangars at his office on Thursday January 17, 2019. His plan to begin the construction in early January was halted by the government shutdown.

Federal employees and contractors aren’t the the only ones suffering because of the government’s nearly monthlong partial shutdown.

A local construction company with an $8.4 million contract to build two new hangars for private aviation companies at the Santa Fe airport is unable to begin work on the project because it needs approval from the Federal Aviation Administration — whose employees are furloughed because of the budget impasse in Congress.

“It’s a design-and-build project,” said Peter Brill, president of Sarcon Construction, referring to the work his company has done on the architectural and engineering side. “We’ve been on this for about nine months, getting construction documents ready.”

But the company hasn’t been able to break ground because the FAA approval has been held up by the shutdown.

This not only affects the 15 employees of Sarcon, Brill said, but scores of workers for the 25 to 30 subcontractors — plumbers, electricians, earth movers, concrete workers and material vendors — involved in the project.

The ripple effect, Brill noted, is not limited to federal employees. It goes deeper and wider, touching workers who aren’t the first people many think of when considering the shutdown.

“It seems cruel,” Brill said. “It’s so misinformed. It’s hurting the very people who have less.”

“Our employees are well paid, but some of them have big families to support, so they basically live from check to check,” he said.

Sarcon is a union shop, a rarity among construction contractors in Northern New Mexico.

Martinez said he’s had to send home two experienced carpenters — including one who has worked for the company for 17 years — because of the airport project delay.

“They’re waiting for us,” Martinez said of those employees, though he said they have received job offers from other companies.

Brill said he’s worried that he’ll lose employees if the shutdown drags on, hoping to “accelerate other projects” in the meantime, he said.

The company currently has a couple of other smaller projects, but the airport project promised steady work for eight to 10 months.

Sarcon, which was started by Brill’s late father Sidney Brill in New York in the early 1960s, relocated to Santa Fe more than 20 years ago when Peter Brill and his wife moved here.

The company’s problems with the shutdown were noted in a Senate floor speech by U.S. Sen. Tom Udall, D-N.M., early in the week.

He also said, “As we can see, this shutdown has real consequences for real people, especially for those like those unemployed construction workers, ready and eager to go to work, but unable because of our president’s inability to do his job.”

Many federal agencies have furloughed employees while some “critical” employees have been forced to work without being paid. Meanwhile, federal contractors have been out of work during the shutdown.

The shutdown began when President Donald Trump refused to sign a budget without $5.7 billion to build a wall along the Mexican border. Building a border wall as a bulwark against illegal immigration was one of Trump’s key campaign promises, though he originally said Mexico would pay for the wall.

But even before Democrats took over the House of Representatives, there were not enough votes in Congress for the wall money.

Trump has said the shutdown could last months or years if Congress doesn’t relent on the wall funding. This week he rejected a proposal by Sen. Lindsey Graham, R-S.C., to reopen the government for three weeks while talks continued.

As Udall noted in his speech, while government workers probably will be paid when the shutdown ends, in the past, “contractors have never received back payments after a government shutdown.”

On Monday, Udall and Sen. Martin Heinrich, D-N.M., introduced legislation to give federal contractors back pay.