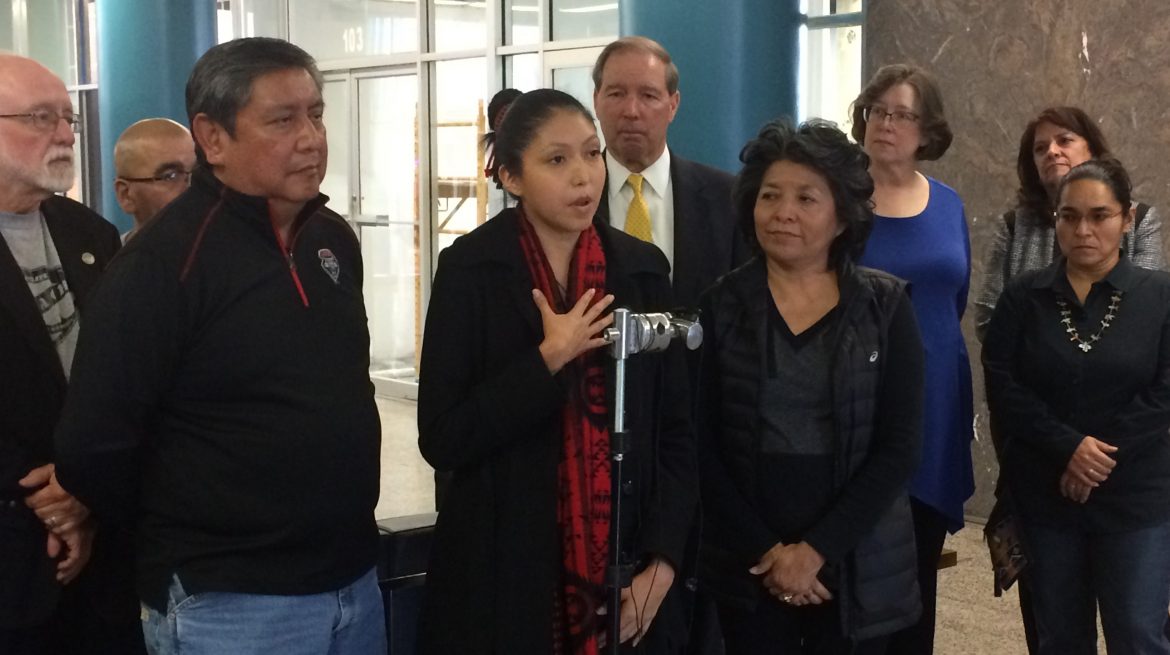 Flanked by her parents and Sen. Tom Udall, Rebecca Riley spoke about the impacts of the federal shutdown

According to what Udall called “conservative” estimates, 10,800 federal employees in New Mexico are working without pay or have been furloughed. The shutdown is also affecting government contractors and local economies.

The shutdown, he added, is hurting the country’s ability to move forward.

“The best thing we could do would be to open the government tomorrow, and then negotiate whatever issues we have,” Udall said, adding, “Rather than having federal employees held hostage for the president to get this vanity wall that he wants.”

Udall was joined by federal employees, contractors and families who are affected by the shutdown, either because they’re not being paid, their contracts are on hold or they cannot receive critical services.

At any given time in the United States, there are about 5,000 airplanes in the sky, said Daniel Watson with the National Air Traffic Controllers Association. Meanwhile, air traffic controllers are currently working without pay. Watson said it seems as though many people don’t think about the shutdown because it doesn’t affect them directly. “We continue to go to work and to be professionals, and we will continue to do that,” he said. “But we want people to know that the reason [flights] haven’t stopped, is because we’re going in—and not getting paid.”

Rebecca Riley, whose father is a federal employee, noted that children shouldn’t have to worry about their parents. It’s not just that some people can’t pay their monthly bills, she said. They’re also having to choose between buying food or gasoline.

Gary Lujan, from the Pueblo of Taos, worries about how the shutdown will continue to affect students and families at the Santa Fe Indian School, where he is the director of trust land. “There is an emotional impact on the students,” he said, some of whom have parents with federal jobs, or rely on the Supplemental Nutrition Assistance Program, or SNAP.

Another federal employee, who has been deemed “excepted” and still goes to work, mentioned some of the emotional impacts, as well.

“Federal employment used to be job security, it used to be an honor,” said Angela Palacios James, who has experienced four federal shutdowns. In addition to grappling with the uncertainty of not getting paid and worrying about co-workers, federal employees also find themselves criticized on social media and in the news for not having saved for an emergency.

James hopes “someone comes through and steps up” so that “we can get back to what we do best, which is working for the benefit of the American people.”