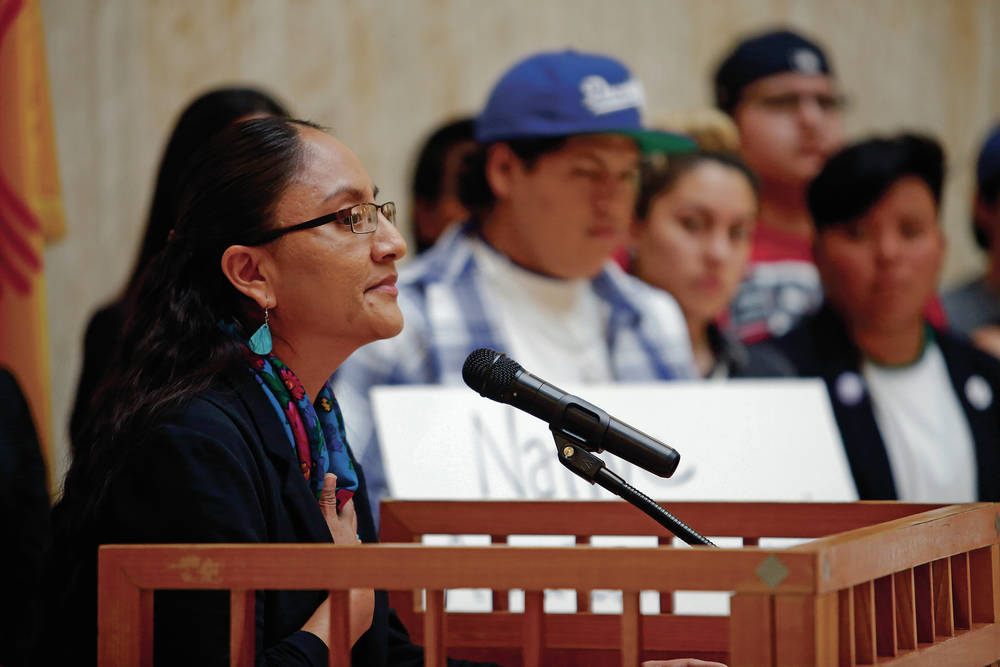 Wilhelmina Yazzie of Gallup, one of the plaintiffs in a lawsuit asserting that the state unconstitutionally underfunds its public education system, speaks during a Transform Education New Mexico press conference at the state Capitol on Monday, January 21, 2019.

Gov. Michelle Lujan Grisham’s plan to cap charter school enrollment met a wave of opposition Monday, and at least one Democratic senator said he would break party ranks to oppose the initiative.

The attempt to limit enrollment in charter schools is contained in wide-ranging Senate Bill 1, which has sponsors from both political parties.

Critics of the bill include Sen. Bill O’Neill, a Democrat from Albuquerque and co-founder of a charter school in that city.

O’Neill said the bill would put a stranglehold on schools that many parents, students and educators believe are a good alternative to traditional public schools.

The governor’s proposed cap is “a frontal assault” on charter schools, O’Neill said.

He said charter schools serve the students highlighted in a landmark court case in which a judge ruled that the state was not doing enough to help impoverished children, those with learning disabilities and those learning English as their second language.

His voice choking with emotion at times, O’Neill said charter schools are helping kids and should not be targeted for stagnation. He was one of many people who defended charter schools during a hearing before the Senate Education Committee.

Charter schools serve about 8 percent of New Mexico’s public school students, but they have received 55 percent of all new school funding in the last decade because of various legal loopholes, Stewart said.

Matt Pahl, executive director of the nonprofit Public Charter Schools of New Mexico, said the state’s 97 charter schools serve about 26,500 students now. A cap of 27,000 would severely limit growth for at least that year.

More perplexing, he said, is the drive to contain enrollment when many charter schools are performing well.

Senate Bill 1 would do more than limit the growth of charter schools.

The measure would also raise teacher salaries, phase in K-5 Plus summer academic programming over three years, increase funding for at-risk students and scale back financial support for students older than 22 who are enrolled in high school.

Stewart is sponsoring the bill along with Sens. Gay Kernan, R-Hobbs, and Bill Soules, D-Las Cruces. All three are former teachers in public schools.

Stewart told the committee that the bill’s various elements meet the mandates of District Court Judge Sarah Singleton’s decision in the Yazzie-Martinez lawsuit against the state. Singleton found that state government is not providing sufficient funding to schools to comply with its constitutional requirements.

Kernan agreed with Stewart’s assessment of the bill, saying it addresses many issues raised in the lawsuit.

But critics of the bill disagreed. They included lawmakers from both political parties, charter school advocates and lawyers representing the plaintiffs in the case.

Stewart said the bill would earmark more money — about $114 million — help English language learners, students with disabilities and those who come from impoverished backgrounds.

But Gail Evans, director of The New Mexico Center of Law and Poverty, which represented one set of plaintiffs in the court case, said it’s not enough.

“That’s a rather minimal amount of money to help kids who need at-risk services,” she said.

In addition, Evans criticized as inadequate a section of the bill that would raise minimum salaries for teachers in the state’s three-tiered licensure system to a base of $40,000, $50,000 and $60,000. She said this is not enough to attract teachers from other states who are earning more.

Others cited concerns about eliminating funding for older students, some in their 40s and 50s, who have returned to high school to get a diploma. They need an education to move forward in life, the bill’s critics said.

Even those who praised the broad, complex bill brought up concerns and questions, so much so that the committee members decided to delay action on the measure until at least Wednesday.