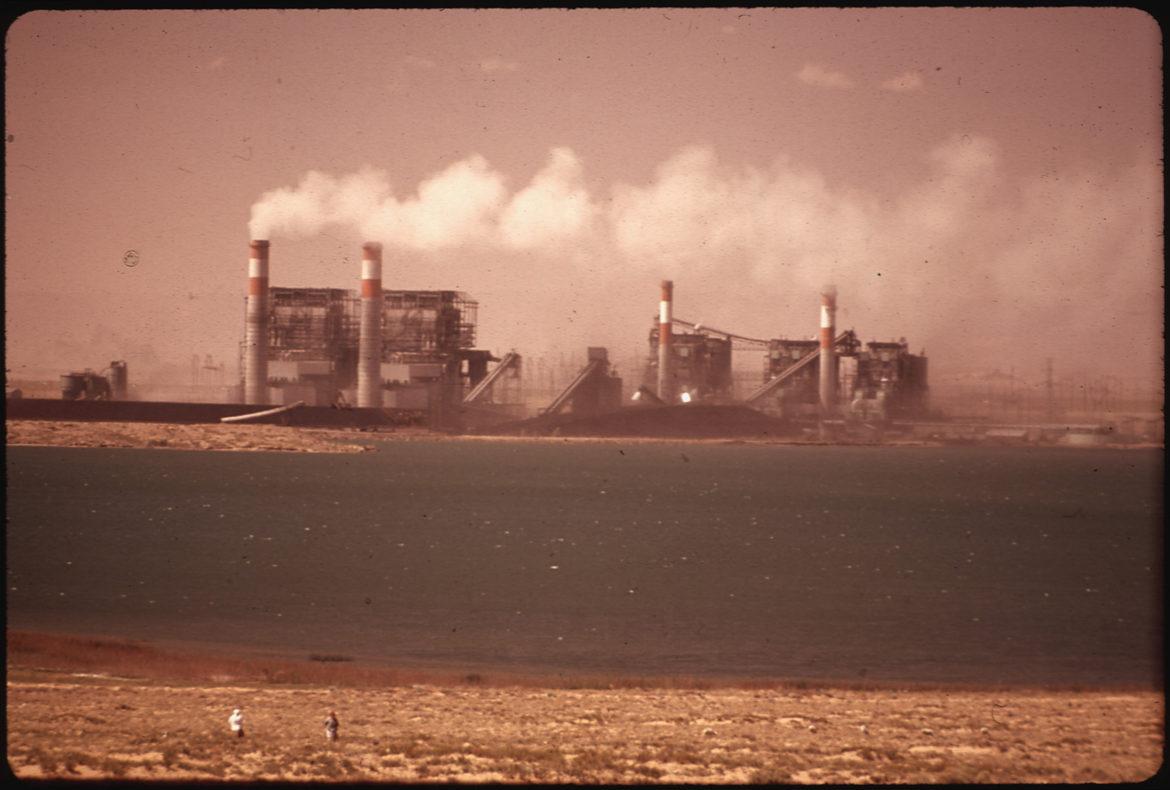 The Four Corners Power Plant, photographed by Terry Eiler in 1972 as part of the EPA's Documerica project.

Standing on the mesas near Bandelier National Monument in about 1970 we looked across the Rio Grande Valley through a thick, often impenetrable gray smog that blew in from the new Four Corners Generating Station near Farmington.

The Clean Air Act and later regulations forced the coal fired  power plant’s owners to control its visible pollution but today invisible greenhouse gasses spew from the plant unabated. With an epidemic of coal fired power plant closures sweeping the country, why does the Four Corners Generating Station chug on?

Much has changed since the mammoth Four Corners Generating Station (FCGS) was built in the 1960s. Large scale wind and solar energy technology have come on line and grown rapidly, a massive boom of natural gas production has swept the country, pollution controls have tightened on coal fired power plants, climate change is on the mind of a majority of Americans, and ratepayers are actively interested in where their utility companies are sourcing their electrical power.  While coal used to be the cheapest source of energy, it now ranks as one of the most expensive.

The Four Corners Generating Station is an antique among coal fired power plants which are designed to run for a maximum of 50 years. It was built between 1963 and  1970 with five boilers fed by coal from the nearby Navajo Coal Mine on the Navajo Reservation. Three of the oldest boilers were closed and demolished in 2014 to meet pollution regulations, leaving two generating 1540 mega-watt hours (MWH) of electricity today.

The FCGS is within 200 miles of 15 national parks, some of which, like Grand Canyon National Park and Bandelier National Monument, have “Class 1” (the most protected) air quality status by law. The plant generates myriad environmental problems by releasing multiple pollutants like mercury and producing 70 million tons of toxic coal ash per year that blows in the wind and contaminates nearby wells. Its stacks spew 11 million tons per year of carbon dioxide. It emits fine particulates that contribute to “regional haze” obscuring views and lodging in the lungs of nearby residents. The plant  and two others nearby use a third of the water in the San Juan River to cool their boilers. And the Navajo Mine that feeds it has churned thousands of acres of land and is a significant source of methane in itself. The mine is the disposal pit for the plant’s coal ash.

In the United States, 268 coal fired power plants have closed since 2010, joining an international trend away from coal and toward cleaner, cheaper energy sources. Coal is the most expensive fuel for electricity generation on the market, with electricity from the FCGS costing around $79 per MWH as compared to $18 per MWH for wind power (with storage) and $35 per MWH for utility scale solar power with storage. Natural gas power plants generate power at around $63 per MWH.

Yet the FCGS shows no sign of shutting down any time soon. Instead the FCGS’s five owners spent $630 million in 2015 to add pollution controls (irrelevant to greenhouse gases) and extend its life, even though the plant experiences declining power output over time due to its age. This disconnect between national energy business trends and coal plants in the Four Corners is happening largely because state regulators in New Mexico and Arizona are enabling the plant’s owners to foist the cost of expensive, polluting power on captive ratepayers.

Southern California Edison sold a large share in the FCGS in 2011 after California voters forced utility companies in the state to divest from coal plants because of climate change. Arizona and New Mexico regulators approved the purchase and rate increases to pay for it. Then Arizona Public Service Company and Public Service Company of New Mexico (for profit corporations) who own the largest shares of the FCGS went to their state regulating commissions in 2012 and asked to charge ratepayers for the costs of pollution controls on the plant. The Arizona Corporation Commission and the New Mexico Public Regulation Commission agreed to let the companies charge their customers for pollution control retrofits to the plant. The rate increases were structured to allow the utility companies to make a profit while the customers saw their electricity rates increase. These ratepayers have no choice but to buy power from these utilities unless they generate their own power with solar panels on the roofs of their houses.

Given that Arizona and New Mexico regulators are shielding the utility owners of the FCGS from its true costs, it may require a consumer revolt, either by voting for higher state renewable energy standards or through direct consumer pressure on these utilities to force at timely closure of the FCGS. Until that happens the upper Rio Grande Valley and the rest of the Four Corners region will continue to be bathed in pollution from the FCGS.

Tom Ribe is a Santa Fe based writer and Executive Director of Caldera Action.