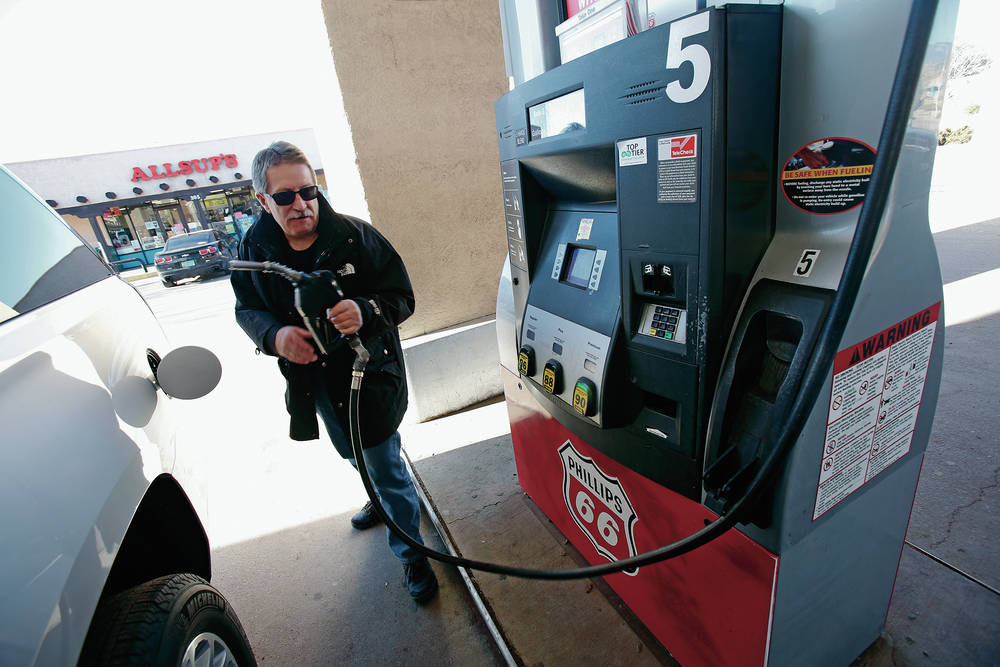 Craig Meadows of Denver fuels his GMC Yukon at the Allsup's gas pumps on North Guadalupe, where he paid $41.64 for a half tank on Monday, January 21, 2019. New Mexico's government has not raised the state tax on gasoline since 1993. A bill sponsored by Democrats in the state House of Representatives would raise the tax on gasoline by 10 cents a gallon.

New Mexico’s government has not raised the tax on gasoline since 1993.

This year, that could change.

A sweeping tax bill sponsored by Democrats in the state House of Representatives would increase the tax on gasoline by 10 cents a gallon, from 17 cents to 27 cents, starting in mid-2020. The special fuels tax would go up a nickel, too, from 21 cents to 26 cents.

Backers say New Mexicans do not have to look any further than the wear and tear on the state’s highways for a reason to raise the tax, proceeds of which have traditionally paid for road maintenance.

But opponents contend the state has plenty of money to cover the cost of improving and building roads without hitting up taxpayers.

Economists expect the state will have more than $1 billion in additional revenue for the fiscal year that begins in July on top of hundreds of millions of dollars in a surplus for the current budget year. Some lawmakers argue a big chunk of that money should go towards infrastructure.

While plenty of lawmakers agree the state needs to spend money to improve its roads, the question is who should pay and how. Should New Mexico use the money it has now or also try to shore up a source of funding for the future?

“We’re way behind,” says Rep. Roberto “Bobby” Gonzales, a Democrat from Taos who has proposed increasing the gas tax in previous years and is a co-sponsor of this year’s legislation, House Bill 6. “We really need to catch up and to be safe.”

A report from the private nonprofit research group TRIP found that nearly half of New Mexico’s major local and state-maintained roads were in poor or mediocre condition as of 2017.

The same group estimated this had cost motorists around $900 million in vehicle depreciation, additional repair costs, increased fuel consumption and wear on tires.

Roads are a particularly pressing concern in Southeastern New Mexico, where the bustle of an oil boom has taken a big toll on rural roads that were not designed for parades of tanker trucks. Improving infrastructure, then, could prove key to the boom that is buoying New Mexico’s finances as well as for economic development elsewhere.

Proponents of raising the gas tax note New Mexico already has a lower rate than all of its neighbors, according to data from American Petroleum Institute.

The state’s tax does not go as far as it did in 1993, lagging behind inflation. As Gov. Susana Martinez repeatedly vetoed proposals to raise the gas tax during her eight years in office, manufacturers were marketing more fuel efficient vehicles that could give drivers more out of each gallon of fuel.

Drafts of the state budget call for steering hundreds of millions of dollars from the state’s windfall of oil revenue into infrastructure but backers of raising the gas tax argue the government needs a steady stream of revenue to pay for maintaining its highways into the future.

Using money that may not be around in future years when the oil market tanks could only squeeze out other priorities in the future, the thinking goes.

“We need to have a recurring revenue stream of revenue,” said Rep. Jim Trujillo, a Democrat from Santa Fe who chairs the Taxation and Revenue Committee and is a co-sponsor of House Bill 6.

Trujillo cautioned that the bill is at an early stage, with everything up for discussion.

Still, going over the math of the state budget that is beginning to take shape, he argues new revenue is going to have to come from someplace and reinstating the tax on food seems to be a non-starter.

If the state gives teachers a raise, for example, that’s a recurring expense lawmakers will have to account for in coming years.

When lean times return, he argued, New Mexico could end up right back where it was a few years ago, sweeping money meant for infrastructure to patch holes in other parts of the budget.

Republicans counter that the potentially fleeting nature of the state’s current windfall is all the more reason to put much of that money into roads and projects that will not require the same level of spending year after year.

Rep. Jason Harper, R-Rio Rancho, said the gas tax may need to be raised to keep pace with rising costs. But he argued for a more modest increase — perhaps 5 cents per gallon — if one is necessary.

But the questioned whether that is even needed this year.

“In a year when we have huge surpluses, why are we even talking about raising taxes?” said Rep. Jason Harper, R-Rio Rancho.

Critics have also long argued that increasing the gas tax is regressive, falling disproportionately on low-income people and especially those in rural areas as well as those who cannot afford newer fuel efficient vehicles.

All of this has combined to make raising the gas tax a very politically sensitive issue.

After all, Democrat Bruce King was the last governor to sign a law raising the gas tax. And it handed plenty of fodder for attacks by Republican Gary Johnson during the 1994 campaign. Johnson, of course, ended up winning the election.