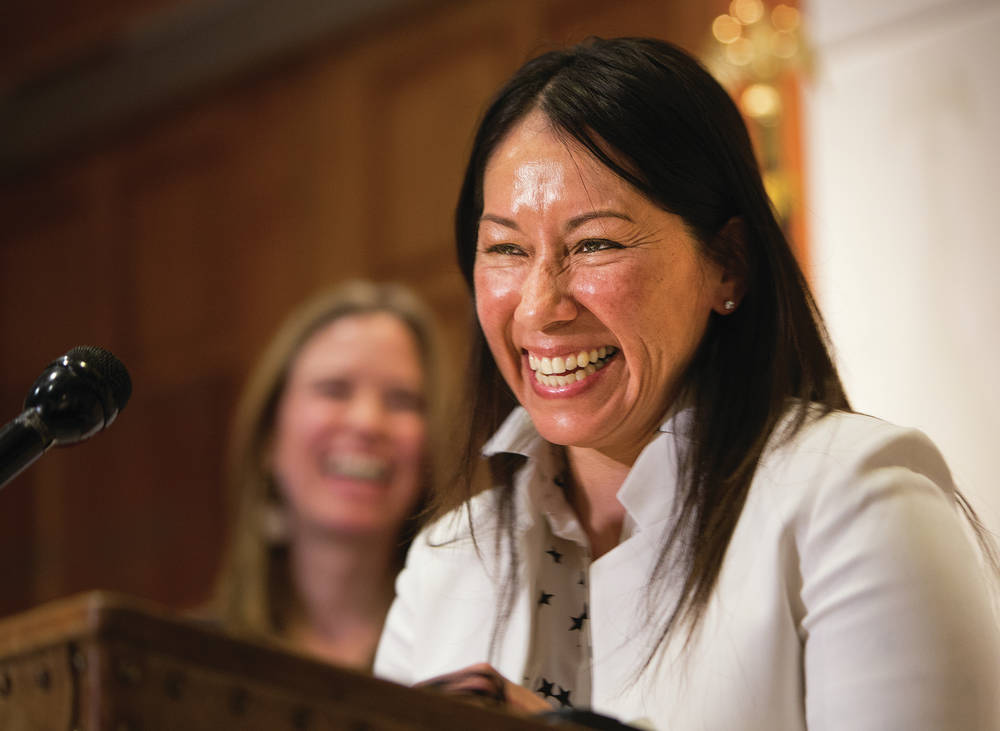 Lynn Trujillo, right, was appointed Tuesday as the new Cabinet secretary-designate of the state Department of Indian Affairs.

Gov. Michelle Lujan Grisham on Tuesday named Santa Fe County’s finance director as secretary-designate of the New Mexico Taxation and Revenue Department and appointed a member of Sandia Pueblo with a background in tribal law as head of the state Department of Indian Affairs.

The Cabinet-level appointments of Stephanie Schardin Clarke to lead the tax agency and Lynn Trujillo to lead Indian Affairs leave the Democratic governor with two remaining Cabinet positions to fill — secretaries of the Department of Corrections and the Public Education Department.

Lujan Grisham, who has made public education one of her top priorities, indicated Tuesday that an appointment for public education secretary could be coming soon. In the interim, Lt. Gov. Howie Morales, a former educator, is overseeing the department.

Among Schardin Clarke’s goals, the governor said, will be to make the tax agency’s Motor Vehicle Division more “responsible, accountable and customer friendly.”

The Taxation and Revenue Department is responsible for collecting and distributing taxes and fees. As the income tax season approaches, Lujan Grisham said, Schardin Clarke also will focus on ensuring that tax returns are disbursed in a timely manner.

The governor has charged Trujillo with ensuring the Department of Indian Affairs, created in 2003, strengthens its collaboration with the 23 tribes in New Mexico — 19 pueblos, three Apache nations and the Navajo Nation — on such issues as housing, water rights, taxation and veterans affairs. Roughly 10 percent of the state’s citizens, some 220,000, are Native American.

“I have two incredibly strong leaders who care about serving New Mexico and New Mexicans,” Lujan Grisham said of the two appointees.

Both Schardin Clarke and Trujillo said that among their biggest challenges are vacancies in departments that have experienced repeated budget cuts.

Schardin Clarke, whose experience includes stints at the State Board of Finance and the Department of Finance and Administration, said she hopes to restore confidence in the Motor Vehicle Division and to ensure the division “follows the law, does the job right, but not at the expense of customer service.”

The Taxation and Revenue Department has other challenges, including a lawsuit filed by several cities, including Santa Fe, claiming it erroneously withheld millions of dollars in gross receipt tax revenue from local governments. Schardin Clarke did not discuss the case Tuesday.

Trujillo said she plans to work closely with the next public education secretary to ensure the state is meeting its obligation to serve Native students under the New Mexico Indian Education Act.

Native students were among those cited in a lawsuit alleging the state is not providing enough resources to ensure a quality education for groups of students considered most at risk. State District Judge Sarah Singleton ruled in June that state leaders must come up with a plan to increase education funding to meet the needs of Native students, English-language learners, special-education students, children from low-income families and other “at-risk” kids.

She’ll also work to rebuild tribal trust in state government, she said, because “during the last administration, there was a lack of respect and inclusion for tribal governments.” Trujillo was referring to the administration of former Republican Gov. Susana Martinez.

Both Cabinet designates, who still must be confirmed by the state Senate, will earn $128,000 per year.