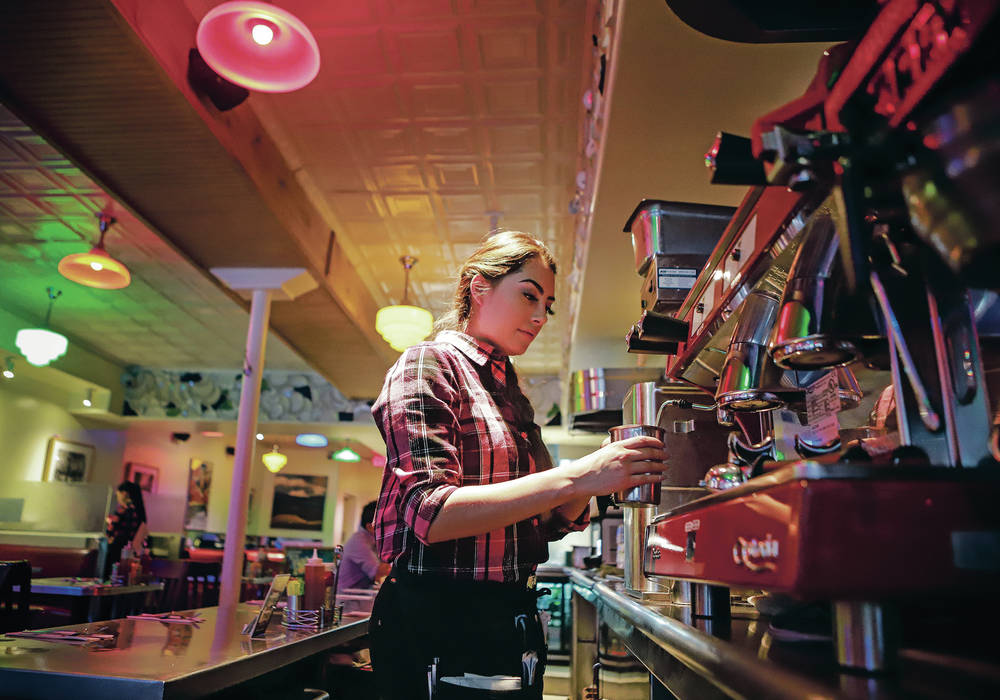 Jennifer Marquez steams milk at the Plaza Cafe on Tuesday afternoon, when the New Mexico House Labor, Veterans and Military Affairs Committee was discussing House Bill 31, which would increase the state's minimum wage and eliminate the lower minimum wage for tipped workers. The committee advanced the measure.

How high will the statewide minimum wage go?

Or will it go at all?

For many business owners, that is a key looming question during the 60-day legislative session.

The minimum wage in New Mexico, unchanged since 2009, could see an upward adjustment from $7.50 an hour.

Rep. Patricia Roybal Caballero, D-Albuquerque, wants to double that to $15 an hour Jan. 1, 2020. That would make it the highest state minimum wage in the country.

“So be it,” said Roybal Caballero, who has introduced House Bill 46 to create that change. “We’ve been the lowest in the nation” in many areas. “Why not be the highest in the nation?”

Her bill is a long shot, having received three committee assignments in the House of Representatives. Roybal Caballero’s measure is almost certain to die with so many committees to clear before it could receive a vote by the full 70-member House.

Rep. Miguel Garcia, also a Democrat from Albuquerque, is proposing a smaller increase through three annual adjustments. He wants to raise the minimum wage to $10 an hour July 1, $11 in July 2020 and $12 in July 2021.

Garcia’s proposal, House Bill 31, advanced on a 6-3 party line vote, from the first of two House committees assigned to hear it — a much more manageable path than Roybal Caballero’s bill faces.

Both bills would adjust the minimum wage annually based on inflation — Garcia’s starting in 2022 and Roybal Caballero’s in 2021.

Washington and Massachusetts have the highest state minimum wages at $12 an hour. The highest minimum wage among cities is $15.65 in Sunnyvale and Mountain View, both in California’s Silicon Valley.

Among the New Mexico locales that have enacted higher minimum wages, the city of Santa Fe and Santa Fe County have a minimum wage of $11.40, which likely will rise slightly in March. Santa Fe has annual cost-of-living adjustments built into its Living Wage Ordinance.

“The underlying thing is New Mexico children and families deserve a better quality of life and not worrying where their next meal comes from or how to pay the rent,” Garcia said. “Parents have to work multiple part-time jobs to make ends meet.”

The U.S. Bureau of Labor Statistics in 2017 cited 14,000 people earning minimum wage. But that number was based on the federal minimum wage of $7.25. The New Mexico Department of Workforce Solutions cites the bureau’s number and does not have an employment figure based on $7.50 an hour, spokeswoman Stacy Johnston said.

New Mexico has some 245,000 people, or 31 percent of its workforce, earning low wages at or near a proposed minimum wage of $12 per hour. About 159,000 or nearly 20 percent of workers are paid less than $12, said Sharon Kayne, a spokeswoman at the nonprofit New Mexico Voices for Children, which issued a report in August on the minimum wage based on data from the Economic Policy Institute.

The bill would make a big difference to workers paid the lower minimum wage for tipped workers.

Alejandro Medina of Santa Fe, who works at a local restaurant, is one of them.

“If I get an increase, it would help me pay rent, get a house,” said Medina, who was at the state Capitol on Tuesday, joining other low-wage workers to testify for a higher minimum wage.

Medina’s family makes ends meet because his wife works, too. But that means they have to find care for their 2-year-old daughter. He says his wife might be able to stay home with their daughter if he gets a raise.

“Servers don’t want this,” Wight said, taking a position opposite from Medina’s. “They understand the economics of restaurants. …”

If the minimum wage goes up, all other wages in restaurants would have to increase, Wight said.

“For every $1 increase in the minimum wage, that costs a restaurant $2,000 per full-time employee,” she said. “You can’t sell enough enchiladas to make that work. … To go from $7.50 in the rural areas to $10 immediately will be a huge burden on the restaurants.”

The New Mexico Association of Commerce and Industry, the statewide chamber of commerce and business advocate, seems more resigned to the idea of an increase in the minimum wage than the restaurant association.

“We understand an increase will happen,” said Rob Black, CEO of the Association of Commerce and Industry. “We don’t have a number that we think would be appropriate. Obviously, there will be a lot of interest in raising the minimum wage in New Mexico. There needs to be a responsible way of approaching that. Our concern is any efforts done would pay attention to the effect on small businesses.”

Roybal Caballero would rather look at the effect of the minimum wage on the people who live on that wage.

“Those taking the highest risk have to live at $7.50 an hour in 2019,” she said. “That to me is offensive. You’re going to need the assistance of subsidies.”

The issue is not merely confined to the state’s more urban areas. Even in some of its smaller towns, minimum wage matters.

Todd Duplantis, owner of Cornerstone First Edition Pizza & Subs in Tucumcari, says personal ambition has a lot to do with what someone earns.

Duplantis said he needs to keep labor costs below 30 percent of his total cost to stay afloat. Right now he’s at 25 percent to 28 percent. He pays servers $5 per hour. He has seven cooks.

“My cooks are not qualified to make $10,” said Duplantis, also mayor pro tem of Tucumcari. “If I had to bring everybody up to $10, I would have to raise prices 38 percent.”

“My math is it would cost a business like mine about $110,000,” Calhoun said about a $10 minimum wage. “That cost has to go somewhere. It will cost some people their jobs and prices would go up. I ballpark a 10 percent increase.”

“I think they should leave the minimum wage alone,” he said. “If they are going to mess with it, they need to put in a wage for those who are just entering the workforce.”

Montoya calls this a training wage.

“I think the biggest hole is not leaving some sort of entry wage for teenagers. A teenager doesn’t need a living wage, just a first job.”

Opponents of a training wage say it would set the stage for employers to hold down costs by firing workers when they are about to advance from trainee to the regular staff.

“When you raise the minimum wage, teens are left out of a job,” Wight said.

Gov. Michelle Lujan Grisham, a Democrat, designated Bill McCamley, her Cabinet secretary-designate of the Workforce Solutions Department, to testify Tuesday at the hearing on Garcia’s bill. McCamley said the governor supports an increase in the minimum wage, and Garcia’s bill tracks with the adjustments she favored during her campaign.

So, how high will the minimum wage go?

Roybal Caballero said the political climate is right for a substantial increase.