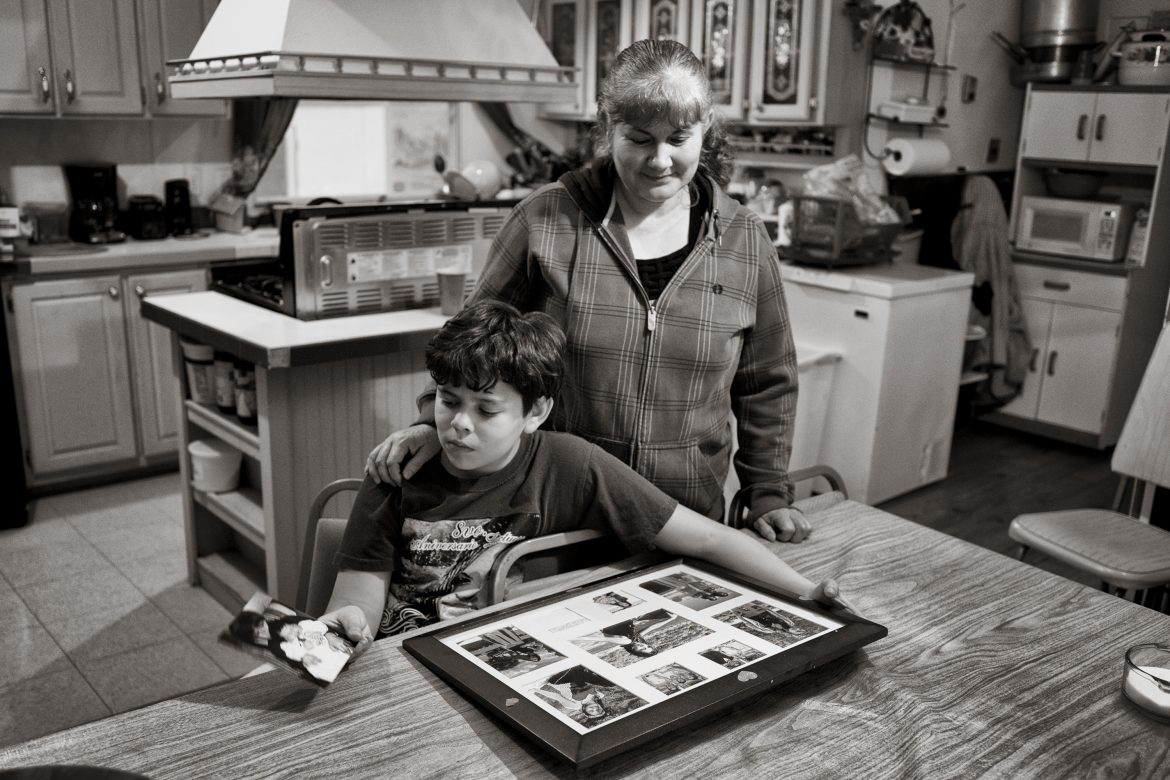 July 17 is the best of days in the Gaytan household, because it marks the birthday of 12-year-old Ian, who lives with his grandparents in a doublewide mobile home on a dirt road in Española. And July 17 is the worst of days, because it marks the anniversary of the shooting death of his 20-year-old mother, Jasmine Gaytan, at the hands of his father, Leroy Fresquez, Jr.

It has been left to Olga Gaytan, a 55-year-old immigrant from Guanajuato, Mexico, to make sense of the contradictions. “People say I’m his grandma, but I always say ‘No, I’m his mother,’” said Gaytan, who stepped in and adopted her grandson following the 2009 murder of her daughter.

Jasmine and Leroy had known each other ever since their days at Carlos F. Vigil Middle School, the same school Ian now attends. It is the school where the two of them met, and the school from which they both dropped out in seventh grade.

No one knows exactly when Leroy began to abuse Jasmine, because she kept it a secret. It was years before her older sister, Ebelin, learned that Leroy once threw Jasmine down a flight of stairs, or that the reason she remained in the relationship was, in large part, because he carried a gun and never went anywhere without it.

By the time he killed her, the two had been together for eight years. According to police and court records, Fresquez shot her at their house in Española, then carried her to the hospital covered in blood. He initially claimed she was the victim of a drive-by shooting, but his account quickly fell apart after an examination of the close-range bullet wounds in her neck.

Jasmine’s murder is the type that is all too common in New Mexico. In 2014 (the most recent year for which data is available), 20 people were killed at the hands of their spouse or domestic partner, according to the New Mexico Intimate Partner Violence Death Review Team. This multidisciplinary team of medical, legal, law enforcement and tribal representatives analyzes the records of every domestic violence case that turns fatal, and according to their data, 72 percent of the killings that year involved a gun.

Advocates have for years been urging the state to adopt a law that would prevent gun ownership by domestic abusers. The New Mexico Legislature is expected to vote on such a bill this session. As written, it would require anyone convicted of domestic violence – a well as anyone convicted of stalking or subject to an order of protection – to surrender his firearms to law enforcement within 48 hours. Police and military personnel would be allowed to keep their guns while on duty; gun owners could recover their weapons once the order of protection expired.

There have been other attempts to pass such a law. The most recent was in 2017, which ex-Governor Susana Martinez vetoed, telling legislators that the issue was “complex.”

Domestic violence experts anticipate a different response from the new governor. Indeed, her spokesman all but guaranteed it when he recently told Searchlight New Mexico that Michelle Lujan Grisham “is committed to making sure those who clearly, clearly, clearly shouldn’t have guns don’t.”

Domestic violence is a well-studied problem here in New Mexico and throughout the U.S. While individual stories may not attract the same media attention as mass shootings, their collective toll is far greater. According to a 2013 U.S. Bureau of Justice Statistics report, 10,470 women were killed in intimate partner homicides between 2002 and 2010. A 2003 study in the American Journal of Public Health found that women are five times more likely to be killed if their abuser owns a gun.

According to a study of domestic violence in New Mexico, children were present at one out of every 3.3 incidents reported to police; the vast majority of those children were younger than 12.

Ian Gaytan was one of those children. Twenty-three days before Jasmine died, Española police were called to investigate a shooting at her parents’ house. When they arrived, Jasmine reported that Fresquez had fired a gun at the house while she and her little boy cowered inside. But when police caught up with Fresquez, he told them he didn’t have a gun and claimed that he had only thrown fireworks at the house.

In fact, it wasn’t Jasmine who had called the police that day. It was her big sister. “Jasmine would never call the police,” Ebelin confirmed recently. “She was too scared. She called me instead.”

Ebelin raced over to their mother’s house, where Ian informed her that, “Dad was trying to kill us.” She saw a bullet hole in a front windowpane; it is still there today. But Jasmine quickly dialed back her initial statement. She told police that perhaps she was mistaken. She wasn’t sure she had seen a gun. Maybe Fresquez was right; he probably had just thrown firecrackers.

Victims so often recant their accusations that some jurisdictions have moved toward laws requiring mandatory arrest and prosecution – with or without the victim’s cooperation. Yet that recanting fails to account for why the conviction rate for domestic violence cases in New Mexico has declined in recent years.

Betty Caponera, director of research for the New Mexico Coalition of Sexual Assault Programs and author of NMCSAP’s annual report “Incidence and Nature of Domestic Violence in New Mexico,” reports that only 8 percent of cases filed in magistrate courts in 2017 resulted in a conviction, down from 21 percent in 2010. In the state’s district courts, where the most serious charges are filed, 29 percent of cases resulted in a conviction in 2017, compared to 37 percent in 2010.

None of these statistics would apply to Jasmine Gaytan, who, like so many victims of domestic violence, never sought a protective order against her boyfriend. No court ever dropped a charge against him because he had never been arrested in connection with domestic violence.

In that sense, former Governor Martinez was right. The roots of domestic violence are complex.

Congress passed laws in 1994 and 1996 that prohibit offenders – those under a long-term permanent protective order or convicted in the assault of a spouse or child – from acquiring or owning a firearm.

But those federal laws are effectively toothless without a parallel New Mexico law. That’s because only federal agents can enforce federal laws. Local police can only arrest offenders who break state laws.

“We have spent a lot of time talking to judges, asking them, ‘Do you or don’t you have the authority to take away guns?’” said Lisa Weisenfeld, former policy coordinator of the New Mexico Coalition Against Domestic Violence. “And they tell us, ‘No.’ That’s why we need a state law.”

Weisenfeld, who worked as a prosecutor in Northern New Mexico for five years, said she could not recall a single instance in which a domestic violence offender surrendered a firearm as a result of criminal charges or conviction.

To give teeth to federal laws, many states have adopted measures requiring offenders to relinquish firearms to police, or to a neutral third party. Many states go beyond federal law by applying the restrictions to all domestic violence offenders, not just spouses – thereby closing the so-called “boyfriend loophole” that exists under federal law. In New Mexico, studies show the majority of domestic violence incidents are perpetrated by former and current dating partners, not spouses.

Restrictions have been passed in both liberal states (California and Massachusetts) and in Second Amendment strongholds such as Alabama, Louisiana, Tennessee and Texas, according to the Giffords Law Center, which monitors and pushes for stronger gun control laws nationwide. The center is named for Congresswoman Gabrielle Giffords, who was seriously wounded in the 2011 mass shooting in Tucson that left six people dead.

No such restrictions apply in New Mexico. Hours after the shooting, a Fresquez family member drove Ian to his maternal grandmother’s house. Once again, the law protected the father: as sole surviving parent, he was initially allowed to determine custody of the child. Fresquez granted it to his aunt.

Soon afterwards, police arrived at the Gaytan house with a court order to remove the 3-year-old. “After all the trauma he had been through, to put him a police car, we wouldn’t allow it,” said Ebelin. Instead, she and her parents reluctantly brought the child themselves to the Fresquez house.

His father served four and a half years in prison, was released in 2014 and is now back in state custody for probation violations.

As for Ian, he wants to be a lawyer. He is a friendly, talkative boy who lately has been learning about his school’s namesake, Santa Fe attorney Carlos F. Vigil, who was known for defending unsympathetic clients. Vigil, too, was shot to death, in a drive-by shooting that happened in 1999 as he walked near his office on his way to court.

CORRECTION: An earlier version of this story referred to Lisa Weisenfeld as the former director of the New Mexico Coalition Against Domestic Violence. She was policy coordinator, not director, of NMCADV.