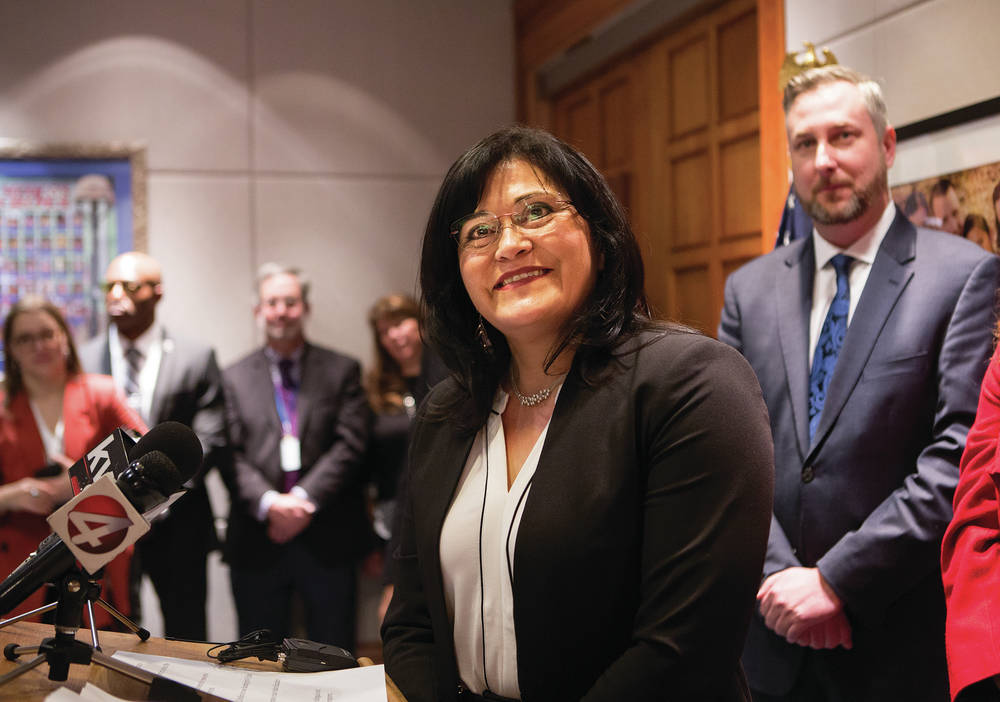 Karen Trujillo was chosen by Gov. Michelle Lujan Grisham to lead the Public Education Department. Trujillo said she plans to coordinate with the heads of other state agencies serving children to find a way to provide community services for children at risk of failing in school.

Gov. Michelle Lujan Grisham on Thursday finally hired her secretary of public education, and both said they aren’t afraid of the challenges ahead.

“I’m feeling not so much fear but excitement,” said Karen Trujillo, a longtime educator from Las Cruces, who will lead the department.

In choosing Trujillo for the $128,000-a-year job, Lujan Grisham ended weeks of speculation about who would overhaul a public education system often ranked as one of the worst in the country.

Together, they hired four New Mexico educators as deputy secretaries and a special adviser from California whose background is in education and sociology.

Trujillo painted an optimistic picture of transforming the state’s public education system. She said she supports higher pay for teachers, more nurses and social workers in schools, and a time of accountability for the department — a point Lujan Grisham echoed.

“We will put out a bold vision of what we plan to do, and we need you to tell us whether we’re doing it,” the Democratic governor said.

Poverty and language barriers can stymie the learning process for many of the state’s 330,000 students. Though high school graduation rates have inched up to 73 percent during the past decade or so, that is still one of the lowest rates in the country.

And based on the most recent round of PARCC standardized test scores, less than a third of students in the state’s public schools are proficient in reading and math.

Poverty is another challenge. Based on 2017 U.S. Census Bureau data, New Mexico ranks next to worst with 27 percent of children living in poverty.

Pressure is on the governor and lawmakers to find ways to fulfill a recent court order to ensure the state is meeting its constitutional mandate to provide an equitable education for those students.

Trujillo and her team come on board with both houses of the Legislature dominated by Democrats, many of whom share the governor’s approach.

Various education bills are before legislators now. They range from efforts to expand the state’s early childhood education program to doing away with the controversial teacher evaluation and school-grading systems.

Change won’t come easy. The state has to comply with the federal Every Student Succeeds Act. It includes an ambitious plan to improve graduation rates quickly and help English-language learners succeed at a rapid clip.

Trujillo most recently served as interim associate dean for research at New Mexico State University’s College of Education. She said she plans to coordinate with the heads of other state agencies serving children to find a way to provide community services for children at risk of failing in school.

This could involve teaming with social workers, counselors, nurses — even providing free clothing — to make sure they can focus on learning.

That effort “may be a heavy lift,” but “we can do it,” Trujillo said.

She touched on other programs and plans the governor has championed, such as emphasizing the need for prekindergarten programming and expanded summer learning classes — called K-5 Plus — for struggling schools to help those students play catch up.

The governor has proposed an additional $500 million in spending for public education in the coming year’s budget. This money would be targeted at meeting the needs of the court mandate. Key legislators have proposed a bit less in new money.

Trujillo collaborated with the governor in selecting the four deputy education secretaries and the special adviser. Each of the deputies will each make $125,000 a year, Lujan Grisham spokesman Tripp Steinicki said, and the special adviser will work under contract, spokesmen Nora Sackett said. Together, they will focus on ensuring the state is meeting the needs of bilingual and multicultural students, Lujan Grisham said.

The incoming deputy secretaries are:

In addition, the governor hired Pedro Noguerra as a special adviser. He is a professor of education in the graduate school at UCLA.

“It feels like educators have retaken the Public Education Department,” he said. “This is a great day for schools in New Mexico.”

Hope Morales, head of the Teach Plus collaborative of public school teachers in the state, said in an email: “It is exciting to see a strong Hispanic woman elected to lead the NMPED. It’s an example of leadership that students in our state need to see and can achieve.”