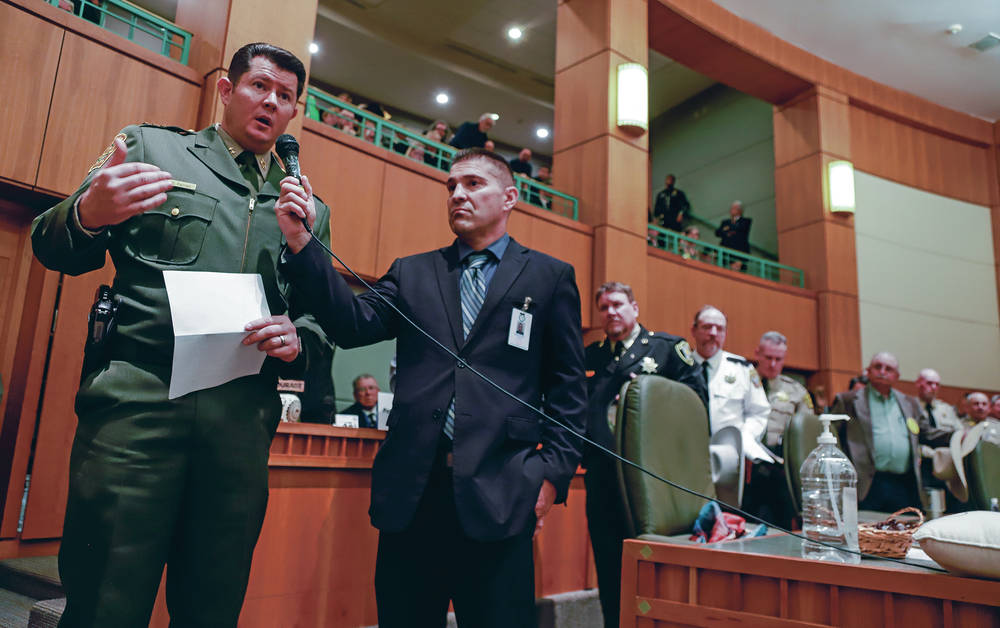 Shane Ferrari, sheriff of San Juan County, speaks in opposition of House Bill 8, which seeks to regulate firearm sales, during a hearing on the House floor at the state Capitol in Santa Fe on Thursday, Jan. 24, 2019.

Legislators are pressing ahead with a slate of gun control bills that would require background checks for virtually all firearm sales and add to the categories of offenders who would be prohibited from possessing a gun at all.

Proponents argue these bills will close loopholes and help keep guns out of the hands of those who have committed violent crimes or are in crisis. But critics argue the laws will prove unenforceable, ineffective and will undermine the right to bear arms.

The measures come with a sense of urgency after mass shootings around the country and in New Mexico have spurred calls for tighter limits on obtaining firearms.

But even with Democrats holding a 46-24 majority in the House, any major gun control measures will face opposition as well as wary moderates.

In turn, Democrats are focusing on a few sets of policies they argue are effective enough to win support for finally passing a bill after years of watching legislation be watered down or blocked altogether. Instead of calling for bans on so-called bump stocks or high-capacity magazines, lawmakers so far are focusing on expanding background checks and tightening limits on the rights of domestic violence offenders to possess guns.

Voting strictly along party lines, the House Consumer and Public Affairs Committee advanced several such measures on Thursday after an hours-long hearing.

House Bill 8, for example, would make it unlawful to sell a firearm without a background check.

Proponents contend this would close a loophole. At a retailer, a gun buyer would have to undergo a federal background check. But plenty purchase firearms elsewhere, such as online, where background checks are not required.

“They would go through the same process as if you went to Walmart or went into Cabela’s,” said Raúl Torrez, the district attorney for Albuquerque, who testified Thursday in support of the law.

The measure would not apply when a gun is transferred from one person to another as a gift or as an inheritance, supporters said.

The Senate Public Affairs Committee advanced a similar measure on Thursday, too, voting along party lines.

Another measure, House Bill 40, would require vendors at gun shows to run background checks on buyers.

Critics pointed out, however, that plenty of gun shows already run background checks.

And given that the law defines a gun show as “an event at which more than twenty-five firearms are on site and available for transfer,” critics argued the bill would also end shooting events such as 4-H shooting sports programs.

Critics countered both measures would do nothing to stop those barred from possessing a gun from getting their hands on weapons.

Pointing to some of the shootings that have spurred calls for more restrictions on guns, Rep. Gregg Schmedes, R-Tijeras, said: “I did not hear one single example of how the intervention of this background check otherwise would have prevented any single violent crime that was presented here today.”

House Bill 83 would create a process through which a household member or law enforcement officer could get a protection order to seize firearms.

Proponents argue the measure would temporarily help keep guns out of the hands of people in a mental health crisis.

“If we have someone in crisis, we need to have the tool to be able to address those issues and take those weapons and secure them temporarily,” said Mike Heal, chief of the Aztec Police Department, who recounted a shooting in 2018 that left two students dead at a local high school.

But some, including prosecutors and law enforcement officials, questioned whether the process the bill would create for so-called “extreme risk protection orders” would be fair to gun owners, making it too easy to confiscate firearms under a process they contend could be abused.

“It only takes a finding of probable cause without any due process,” said Dianna Luce, district attorney for the Fifth Judicial District in southeastern New Mexico.

Meanwhile, House Bill 130 would create criminal penalties for negligently storing a firearm — a measure that proponents hope will help keep guns out of the hands of children.

In her State of the State address, Gov. Michelle Lujan Grisham said she expected lawmakers to pass gun control during this year’s 60-day session.

“I expect to sign a bill that will ban those convicted of assault from purchasing or possessing a gun. I expect strengthened background checks, and I expect tighter restrictions on safekeeping to ensure children do not have access to guns in the home,” she said.

Legislators have proposed some such measures in the recent past but have run into opposition from moderate Democrats, well-organized gun owners and the former Republican governor.

Still, the debate is bound to get wrapped up in a bigger, visceral debate about what to do in the face of carnage that is seemingly becoming routine.

Some students came to the Capitol to talk about the fear that their high schools are not safe.

Gun owners came to talk about their fear that each bill represents government reaching further into their lives.