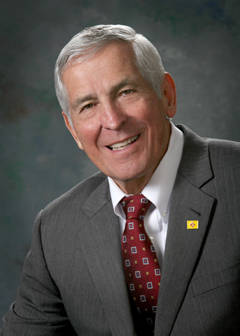 Henry “Kiki” Saavedra, who represented an Albuquerque South Valley district in the New Mexico House of Representatives for nearly 40 years, is dead. He was 82.

A statement issued by son Marc Saavedra on behalf of the family said the late lawmaker suffered from Alzheimer’s disease for the past couple of years. But, the statement said, “his lively spirit continued to shine through until the end, and we are grateful that he is now at peace.”

Saavedra, a Democrat who was retired from Albuquerque city government, served in Legislature from 1977 through 2014 and chaired the House Appropriations and Finance Committee in his final years at the Roundhouse.

He was a friend and political ally of former state Rep. Luciano “Lucky” Varela, D-Santa Fe, who died in 2017.

Born in Albuquerque in 1936, Saavedra graduated from Albuquerque High School, where he played many sports including baseball. A 2014 resolution by the Albuquerque City Council honoring his years of service said that because of his baseball skills, Saavedra had been asked to try out for the St. Louis Cardinals.

Saavedra graduated from St. Joseph’s College in Albuquerque and served in the Air National Guard.

He began working for the city of Albuquerque in 1967, eventually becoming director of the city’s Parks and Recreation Department. He retired in 1995.

Two years after his election to the Legislature in 1977, he was appointed to the Appropriations Committee. He became chairman of that powerful panel in 2005.

A 2014 House memorial honoring Saavedra before his retirement noted he was elected during the days of the “Mama Lucy’s” — an informal alliance of primarily Hispanic Democrats — and was mentored by former House Speaker Walter Martinez.

Because of his humor, in 1988, Saavedra was the subject of a tongue-in-cheek memorial declaring him “House jester.”

Tributes from lawmakers, both Democrats and Republicans, came quickly.

Gov. Michelle Lujan Grisham said through a spokeswoman, “He was a treasured leader in the state House, looked up to by new legislators of both parties as a welcoming teacher, and he championed projects like funding New Mexico’s Special Olympics. I especially appreciated his warmth, fairness, and delightful sense of humor. He was a gentleman through and through, and the Legislature is a better place because of him.”

“Kiki was always focused on making sure that anyone affected by a bill have a chance to give their input,” Egolf told the New Mexican.

On a personal note, Egolf said Saavedra loved kids. “Any time my two young daughters, or any kids, came into the House lounge, he’d always reach into his pocket and give them a dollar bill. That’s just how he was.”

Rep. Patricia Lundstrom, D-Gallup, who chairs House Appropriations, paid tribute to Saavedra on Monday by placing his old nameplate in front of her seat. “He dedicated his life to public service and we are better off because of it,” Lundstrom later said in a statement. “It is a loss for all New Mexicans,”

Rep. Andres Romero, an Albuquerque Democrat who succeeded Saavedra in House District 10 after the veteran lawmaker retired in 2014, said ” it’s a very sad day for the Legislature.”

Sen. John Sapien, D-Corrales, said Saavedra dealt with political adversaries in a most civil way. He said Saavedra always set aside any philosophical differences by saying, “It doesn’t make them bad people.”

Senate Republican Whip Bill Payne, R-Albuquerque, said Saavedra “was one of the last great leaders of the state that everybody knew and everybody loved.”

“Kiki Saavedra was just larger than life. I’d ask myself, who is this guy who is so funny and so quick-witted?” said Sen. Bill O’Neill, D-Albuquerque.

Former state Republican Party Chairman Ryan Cangiolosi tweeted a photo of Saavedra and the late Rep. Larry Larrañaga, R-Albuquerque, another past chairman of the Appropriations Committee. New Mexico, Cangiolosi said, “has lost another statesman and titan of the NM Legislature. Reps. Saavedra and Larrañaga represented an era of bipartisanship and teamwork.”

Saavedra is survived by his widow, Charissa Saavedra, five children, four step-daughters, 17 grandchildren, a great-grandson, and his sister Helen.