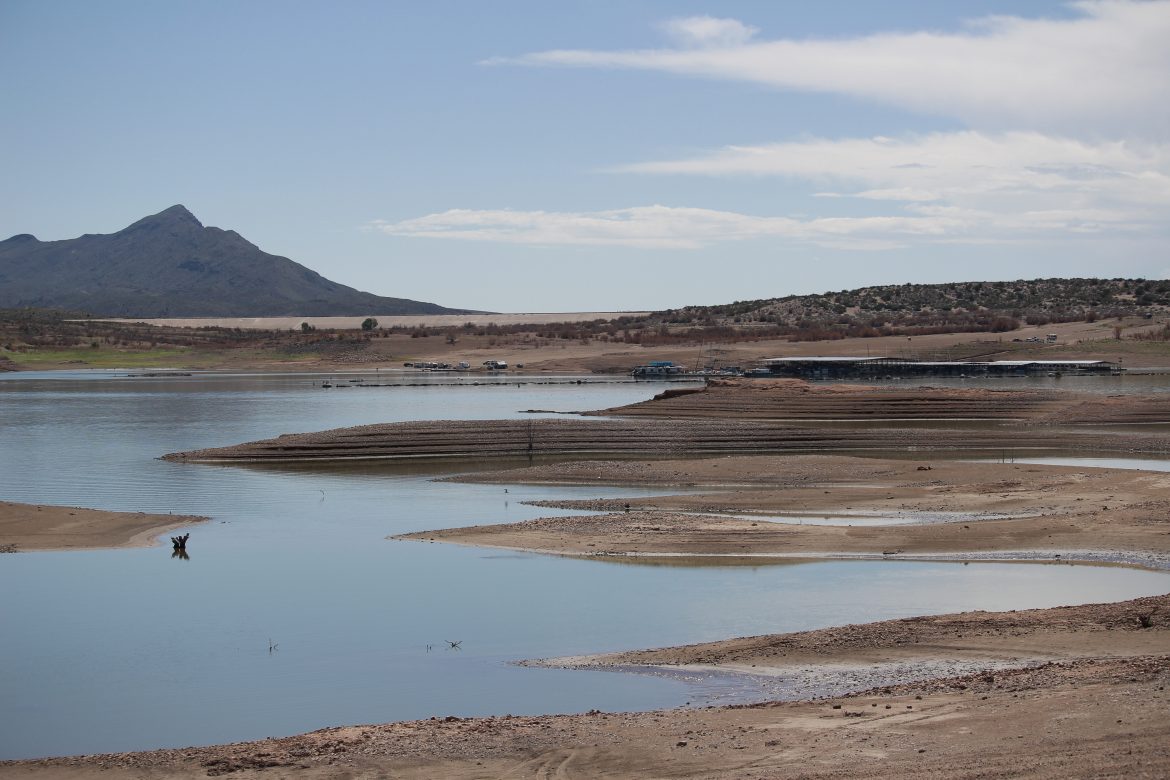 Whether the issue is water, energy development or Superfund cleanup, New Mexico agencies have a lot to address this year

Each session of the New Mexico Legislature, it’s tempting to rush to cover bills, some of which never make it out of committee, let alone get signed into law. There’s no doubt many important bills are winding their way through the legislature this year—related to renewable energy, healthy soils and pollution fines. But this year, I’m kicking off environment coverage of the 2019 session by looking at what three critical agencies have to work with in terms of budgets and responsibilities.

On Friday, the heads of the New Mexico Energy, Minerals and Natural Resources Department (EMNRD), New Mexico Environment Department (NEMD) and the Office of the State Engineer presented to the House Appropriations and Finance Committee. The top staffers were there to answer questions about their department’s budgets, one version recommended by the Legislative Finance Committee analysts and another recommended by the governor’s office.

During budget discussions for EMNRD, people on all sides of the aisle, including oil and gas lobbyists and environmental activists, came to one easy agreement: the department’s Oil Conservation Division (OCD) needs more staff and more money. That division not only processes permits, but conducts inspections. And given the boom in drilling activity in the Permian Basin, OCD’s current staff can’t keep up with the demands of industry and its statutory responsibilities, said Secretary-designate Sarah Cottrell Propst.

But the department is a diverse one. It oversees oil and gas development as well as energy conservation and efficiency programs, mines, renewable energy initiatives and radioactive waste transportation. It’s also responsible for state forests and 34 state parks.

And it was the state parks budget that generated the most controversy and discussion during Friday’s committee meeting.

For four years running, the state transferred $500,000 from the Game Protection Fund to EMNRD to fund conservation activities at state parks, some of which are open to hunting and/or fishing. This year, however, there’s robust opposition to that move.

The New Mexico Department of Game and Fish (NMDGF) does not draw money from the state’s General Fund. Rather, it’s considered an “enterprise agency,” raising money from hunting and fishing licenses and federal grants.

At the committee meeting, opponents of the continued funding transfer spoke out, including Jesse Deubel, executive director of the New Mexico Wildlife Federation; John Crenshaw, president of NMWF and Dan Roper with the New Mexico chapter of Trout Unlimited. Deubel said diverting the $500,000 again in Fiscal Year 2020 would cause NMDGF to lose about $14 million in federal support. (The department uses the fund, currently around $30 million, to leverage federal funding and matching grants.)

Cottrell Propst spoke of the need to boost funding for state parks, to ensure they offer a “safe, fun outdoor experience for everyone.”

Committee chair, Rep. Patricia Lundstrom, D-Gallup, said one solution would be for EMNRD to be more transparent about where and how it spends that money, to ensure it benefits wildlife-related recreation and conservation activities. “The previous administration was reluctant to provide reporting,” she noted.

Agreeing to the need for transparency, Cottrell Propst remained steadfast in her support for the transfer, but added that having a “fight within the family”—between two state agencies—is uncomfortable.

Rep. Nathan Small, D-Las Cruces, recommended the department identify specific projects, rather than requesting a wholesale transfer of funding. And Reps. Phelps Anderson, R-Roswell, and Candie Sweetser, D-Deming, were tasked with investigating the issue and reporting back to the committee.

Waiting for the water boss

As of press time, Gov. Michelle Lujan Grisham has yet to appoint someone to the position of State Engineer. The delay in that appointment may reflect the challenges New Mexico faces when it comes to water issues, as well as in finding qualified candidates willing to take on the gargantuan tasks ahead, which include addressing climate change and changing course on a planned diversion on the Gila River, two issues on which Lujan Grisham campaigned.

Under state statute, the State Engineer must be a registered professional engineer, though previous State Engineers have worked in an array of industries unrelated to water resources.

During the Martinez administration, most state agencies came to be understaffed. But the Office of the State Engineer and the Interstate Stream Commission have one of the highest vacancy rates, at roughly 26 percent, or 89 employees.

Both the LFC and the Office of the Governor recommended a “flat” budget for Fiscal Year 2020. The LFC also included supplemental language in its budget, which an analyst said would get the New Mexico Central Arizona Project Entity “moving in the right direction.”

The state created the NMCAP Entity in the wake of the Interstate Stream Commission’s 2014 decision to build a diversion on the Gila River. It is charged with overseeing its construction, maintenance and operation.

The LFC is recommending that the CAP Entity find matching funds, up to $700,000, that comes from someplace other than the New Mexico Unit Fund—the federal subsidy the state receives for having chosen the diversion alternative on the Gila River. With the possibility of construction still years in the future, the state and the CAP Entity have already spent close to $20 million of the roughly $90 million subsidy.

Before the committee, Romero and acting ISC Director John Longworth both voiced their opposition to that contingency language.

In addition to discussing the many responsibilities of the agencies—ranging from inspecting dams to processing water rights applications—the agencies are also involved in interstate river compacts and litigation, including the U.S. Supreme Court lawsuit Texas filed against New Mexico and Colorado over the waters of the Rio Grande.

That lawsuit is just one “subset” of New Mexico’s interstate litigation, Romero said. “Right now, Texas v. New Mexico is in the discovery phase,” he added, noting that it is straining the agency, especially as Texas has requested thousands of documents, including the state’s entire Water Rights database.

During public comment before legislators, Norman Gaume, a former ISC director, noted that the agencies need additional funding to make “essential improvements” to their programs. OSE and ISC need more money, he said, “if we are to face our serious water supply challenges for the future.”

He added that the recommended budgets perpetuate the “raiding” of trust funds that legally should be used for improvements on the Rio Grande, not to pay the salaries of OSE and ISC employees.

“Climate change will force us to adapt to less surface water, and to mitigate the impacts of reduced surface and ground water on New Mexico’s people and economy,” Gaume added. “The New Mexico Legislature is paying substantial interest to reducing greenhouse gas emissions and not much interest to adapting to less water, and to mitigating the impacts of having less water on all of us who depend upon it in this state.”

Bob Wessely, with the Middle Rio Grande Advocates, also spoke and concurred with the call for more funding. “The State Engineer’s office has been severely damaged through the previous administration, through lack of funding and some strange direction,” he said. “Whatever you can do to support those agencies, we desperately need.”

The New Mexico Environment Department also has a high vacancy rate—at 18 percent, or 117 staffers. But Secretary-designate James Kenney told the committee they’re already starting to staff up and advertise vacancies.

Most of the department’s budget comes from federal funding or special budget requests, rather than from the general fund. Meanwhile, NMED’s special budget requests to the legislature for 2020 are related to funding for the hazardous waste bureau, Gold King Mine litigation, continued remediation of 18 Superfund sites in the state and for NMED’s resource management division.

Kenney also noted the agency is looking into a decision made at the end of 2018, during the administration of Gov. Susana Martinez. In December, the state agreed to allow the U.S. Department of Energy to change how it calculates the amount of waste stored underground at WIPP.

“We are in the process of continuing to look at the volume of record and working with the court through an appeal process that was filed by advocacy groups,” he said. “We’re working through that to see if we can come up with a mediated plan or approach that would maybe be more satisfactory for all the parties involved there.”

Some lawmakers seemed to balk at NMED’s request for $2 million for work on litigation against the federal government for the 2015 Gold King Mine spill into the Animas River. If that suit moves forward, staffers explained, the overall benefits to New Mexico would be “much greater than the $2 million we’re asking for in special appropriations.”

Legislators, including Reps. Paul Bandy, R-Aztec, and Anthony Allison, D-Fruitland, had a number of questions about the Gold King Mine litigation. Bandy asked why the state is continuing to sue over the spill if tests show that the water contamination doesn’t exceed federal pollution levels.

Kenney noted, “The acute issue has passed, but the chronic problem is still there.”