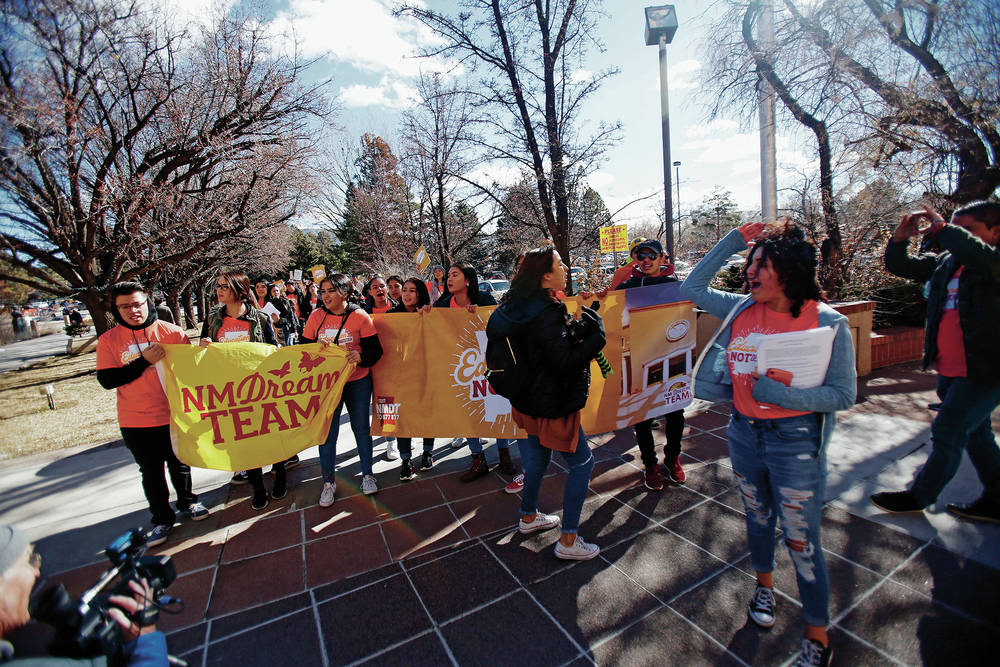 Immigrant families, low-wage workers, and their allies from across New Mexico as well as labor, faith and civil rights leaders arrive at the state Capitol while holding a march and rally in support of a slate of legislative proposals aimed at leveling the playing field for immigrant families and low-wage workers on Monday, January 28, 2019.

Parents and seniors chanted “No somos uno. No somos cien. Somos milliones cuéntenos bien,” which means: “We are not one. We are not 100. We are millions, so count us right.”

About 400 people from across New Mexico gathered at Santa Fe’s Railyard Park on Monday to march in support of Immigrant and Workers’ Day of Action. As the crowd approached the Capitol, posters went higher and voices grew louder — celebrating the state’s hard-working and diverse workforce and raising awareness on upcoming legislative decisions that could affect many lives.

The group outlined a variety of bills of interest, including SB 196, which would prevent state and local agencies from expending resources to enforce federal immigration law; HB 141, which would prohibit state agencies from disclosing sensitive information; HB 31, intended to raise the state minimum wage to $12 per hour; and SB 278, aimed to limit obstacles in maintaining a driver’s license or ID.

For Estela Guzman, a researcher at New Mexico Voices for Children, a statewide advocacy organization, a top priority is to increase the state’s minimum wage.

“These people have to work three to four jobs just to make ends meet,” she said, adding that increasing wages is a long-term solution for many. “If the community can’t thrive, we are all missing out.”

Jose Hernandes, who drove four hours from Farmington, echoed the sentiment while clinging to a poster that read “Somos el 13% de la fuerza laboral en Nuevo Mexico.” The sign, which states, “We are 13 percent of New Mexico’s workforce,” is a “message for all immigrants,” he said, and a reminder that immigrants play a vital role in the state’s economy.

While many of those who attended the march focused on improving pay and working conditions for immigrants, others expressed big-picture concerns regarding the overall inequality and mistreatment of those seeking asylum.

Several kids held signs that read ‘Don’t deport my mom,’ and others the presence of Immigration and Customs Enforcement in New Mexico’s courtrooms. Others protested against President Trump’s desire to build a $5.7 billion wall on the Mexican border and shouted against political rhetoric that belittles non-white Americans.

A young marcher said she lives in fear of how current policies could one day rip apart her family.

“If they take my dad, my family won’t be together. It won’t be the same,” the girl said, adding her parents are both undocumented immigrants from Mexico.

After walking for about an hour, the march’s participants arrived at the Capitol, where they celebrated with burritos, Spanish music and a number of speeches, including words from Santa Fe City Councilor Renee Villarreal.

Villarreal told the crowd that in a state with a large immigrant population, it is vital to “fight against the abuse of power in Washington” and stir local change.

“I think we can do more to protect immigrants,” she said later in an interview. “We should be vigilant with where we prioritize our resources in order to keep our people safe.”