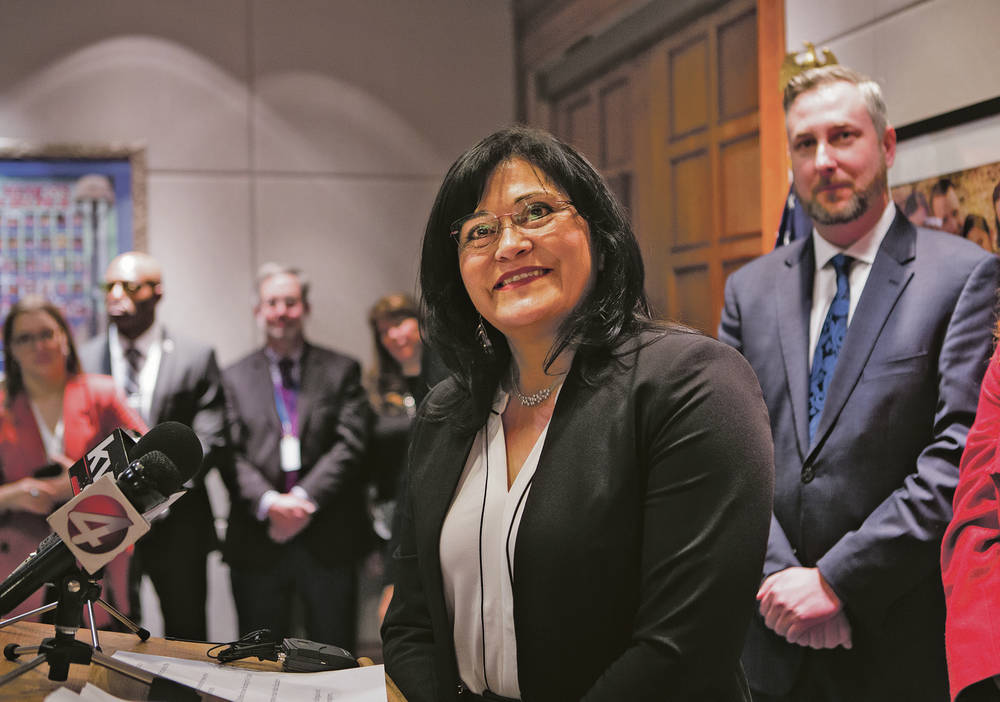 New Mexico Public Education Secretary-designate Karen Trujillo, shown at the Capitol last week during a news conference announcing her appointment by the governor, on Friday outlined some of her priorities for the department, including bolstering teacher ranks and building better collaboration with other agencies that serve children.

Growing up surrounded by a mother and sisters who were teachers, Karen Trujillo decided to rebel.

“No,” she said to herself as a child, rejecting the idea she should become an educator. “I don’t want to do that. I want to do something else.”

But the call of the classroom was too strong for her to resist, she said, and when she was about 12 she had what she called an epiphany. She would join the family trade.

She did, putting in some 25 years in her home state of New Mexico as a teacher, principal, administrator, grant writer and education researcher.

Now Trujillo is the state’s secretary-designate of public education. She says she is looking for ways to improve teacher morale, increase the number of students going to college to become teachers and make sure tribal and bilingual communities are engaged in improving schools.

“We’re not here to shut schools down. We’re here to lift them up,” Trujillo said Friday during a news conference at the Capitol.

On the job for a bit more than a week, she already has outlined priorities.

One goal is shifting the culture of the Public Education Department, criticized by many as an entity that just doesn’t listen, to one that is service oriented toward teachers, parents and students.

Responding to teacher needs and bolstering teacher ranks in the state is another. She also wants her department to collaborate more closely with other state entities that serve children.

She’s already visited some pueblos to ask tribal leaders to help her find Native American candidates for college education programs. Only about 2 percent of the state’s teachers are Native American.

During the news conference, Trujillo kept referring to the”heavy lifting” in front of her to get a number of initiatives going — all while facing a recent court decision ordering state government to do more to help at-risk students.

That mandate, handed down in June by state District Judge Sarah Singleton of Santa Fe, said the Legislature is not allocating enough money to provide a quality education for certain groups of students: low-income children, English-language learners, Native Americans and students with disabilities.

A number of bills are working their way through the Legislature now to satisfy the judge’s order.

Trujillo said she feels confident the state will have a solid plan in place by Singleton’s April 15 deadline. To help in this, Trujillo worked with Gov. Michelle Lujan Grisham to choose four deputy secretaries of education, each tasked with building programs to comply with Singleton’s directive.

For example, Deputy Secretary Kara Bobroff, who has a background in Native American education policy, is focusing on providing resources for the Indian Education Act.

Trujillo and her team also are working to create and submit waivers to the state’s plan for the federal Every Student Succeeds Act. This, she said, is designed to give districts more power and flexibility to serve students. For example, the state’s A-F grading of public schools and statewide standardized testing through PARCC, or the Partnership for Assessment of Readiness for College and Careers, are part of that approved plan, but the governor and Trujillo have vowed to do away with them.

That could take time. Those programs have to be replaced with others that meet federal guidelines. Trujillo said it is possible the state will see one last round of school grades, PARCC-related exams and teacher evaluations through a controversial program.

She’s working to develop a new standards-based assessment that “speaks to who we are in New Mexico.” She believes that can be done and still fall under the umbrella of the state’s Common Core Standards, adopted under former Gov. Bill Richardson.

She would like both the curriculum and those tests to highlight the state’s history, one she said New Mexico children need to learn and embrace.

“Our kids are expected to learn about cultures all over the world, but if they are not aware of their own, they can’t bring that to the table,” she said.

Trujillo probably will have a confirmation hearing in the state Senate before this legislative session ends March 16. She said she plans to meet next week with Sen. Linda Lopez, D-Albuquerque, who chairs the Senate Rules Committee, which vets all appointees to the governor’s Cabinet.