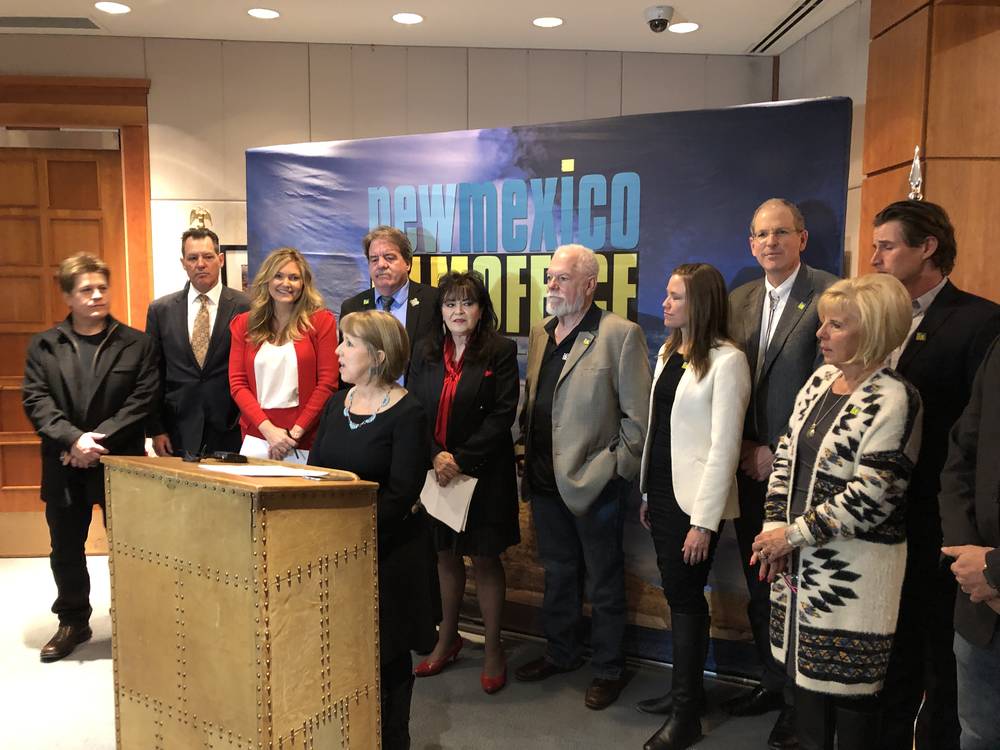 Gov. Michelle Lujan Grisham touted the introduction Friday of Senate Bill 2, which would eliminate the cap on the film tax credit.

Gov. Susana Martinez had a relationship with the film industry that could seem at times like something out of a shoot-em-up Western.

Now, her successor wants to be the new sheriff riding in to town to save the day.

Gov. Michelle Lujan Grisham touted new legislation on Friday that would eliminate the cap on tax credits for film and television shows shooting in New Mexico, a move backed by the burgeoning industry but still likely to meet with opposition from fiscally conservative lawmakers in her own party.

Lawmakers voted in 2011 to limit the amount of money the state could pay under the incentive programs to $50 million a year.

The state was not doling out that much money in credits at the time. But over the years, as more productions have come to New Mexico, the state has hit that cap and racked up a significant backlog of payments estimated to have grown to as much as $300 million.

Qualifying productions currently can claim rebates of up to 30 percent on certain expenses.

That means a television producer who had $10 million in qualified expenditures for a production could receive $2.5 million or $3 million in rebates from the state.

The state reported that the film and television industry spent nearly a quarter-billion dollars in New Mexico during the last fiscal year. The state is on track to exceed that this year, with five productions currently under way and 10 more projects slated, according to the governor’s office.

Democratic lawmakers have proposed raising the cap in the past, arguing it would give more assurance to production companies filming in New Mexico and make the incentive more attractive as other states vie for movies and television shows.

“We have seen a very lucrative return on our investment in the film industry. So, why wouldn’t we do everything we can to remove these inhibitions?” Rodriguez said at a Friday news conference with the governor.

Lujan Grisham, who proposes to pay off the backlog in full, argued that eliminating the cap will prevent the state from accumulating liabilities — that is, owing incentives well into future years.

“Having a cap gives less budget certainty,” she told reporters. “When? How much? How long do you let it collect? Where are the resources going to come from to pay for that? Paying as you go and tying it very specifically to the revenues that you bring in — we didn’t do that since the cap.”

Some lawmakers, including Democrats, are not so sure.

Plenty of lawmakers have been cool to the cap all along, arguing it mostly benefits the state’s bigger towns and cities — a point the industry disputes by pointing to productions in communities from Silver City to Las Vegas, N.M.

Meanwhile, spending hundreds of millions of dollars to pay off incentives the state already owes may rankle some people such as labor union members who want bigger raises for public employees.

Sen. Carlos Cisneros, a Democrat from Questa and vice-chair of the Senate Finance Committee, said he would support loosening the cap. The film industry, he added, has been good for the state.

“A complete drop — that’s unpredictable,” he said, cautioning that the state needs to have some certainty about how much it is paying in incentives in future years, particularly in lean budget years.

Cisneros said the state should first address the payments it owes.

“I think we need to move cautiously,” he argued.