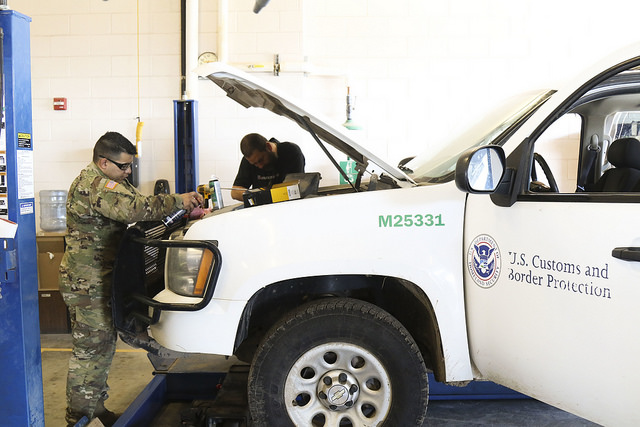 The federal government is sending more troops to the U.S. border with Mexico just as Gov. Michelle Lujan Grisham pulls back National Guard personnel from the state’s southern frontier.

But the Department of Defense is not saying whether any of 3,750 additional troops headed to the border will be coming to New Mexico.

“The specific units and locations are still being finalized,” Maj. Mark Lazane said Wednesday. “We hope to release that information when it becomes available, but we aren’t able to do so at this time.”

The move, which President Donald Trump touted in his State of the Union address on Tuesday night, will raise the number of military personnel on the border to around 4,350.

The federal government sent soldiers to the border just a few days before last year’s election following a request from Customs and Border Protection for help with logistics, transportation and engineering.

The additional forces will help with what the Department of Defense described in a statement Sunday as mobile surveillance and the placement of about 150 miles of concertina wire — coils of barbed or razor wire — between ports of entry.

New Mexico was not included when the federal government sent the first wave of troops to the border late last year.

And that was just as well for some border residents who said a military presence did not seem necessary along New Mexico’s sparsely populated stretch of the frontier.

But large groups of asylum seekers have turned to Antelope Wells during recent months, overwhelming the small and isolated border outpost nestled in the Bootheel.

Lujan Grisham said Tuesday she is keeping a contingent of more than a dozen National Guard troops in Hidalgo County.

And on Wednesday, the governor said she also will send public health officials and personnel from the state Department of Homeland Security and Emergency Management to help in the area.

But the issue, she emphasized, is a humanitarian one.

Lujan Grisham is pulling back most of the National Guard troops her predecessor, Susana Martinez, sent to the border last year as Trump sought to build some sort of military presence in the region that could step up assistance to the Border Patrol.

Lujan Grisham told reporters Wednesday that federal officials had given her little justification for keeping the troops along much of New Mexico’s more than 200-mile stretch of the frontier.

Some residents of the sparsely populated Bootheel have raised concerns that the area has been poorly secured for too long.

“This isn’t new that those remote ranchers have some risk. They do,” Lujan Grisham said. “They absolutely do. So, where has Border Patrol been over the last few decades?”

While Trump has called for a wall, Lujan Grisham said she would prefer security measures suited to particular areas and basic aid to law enforcement like road maintenance.

“Give us some investments that deal with some of these remote areas,” she said, “including more bollard fencing and barrier protections based on what that community tells us will make a difference in conjunction with Border Patrol.”