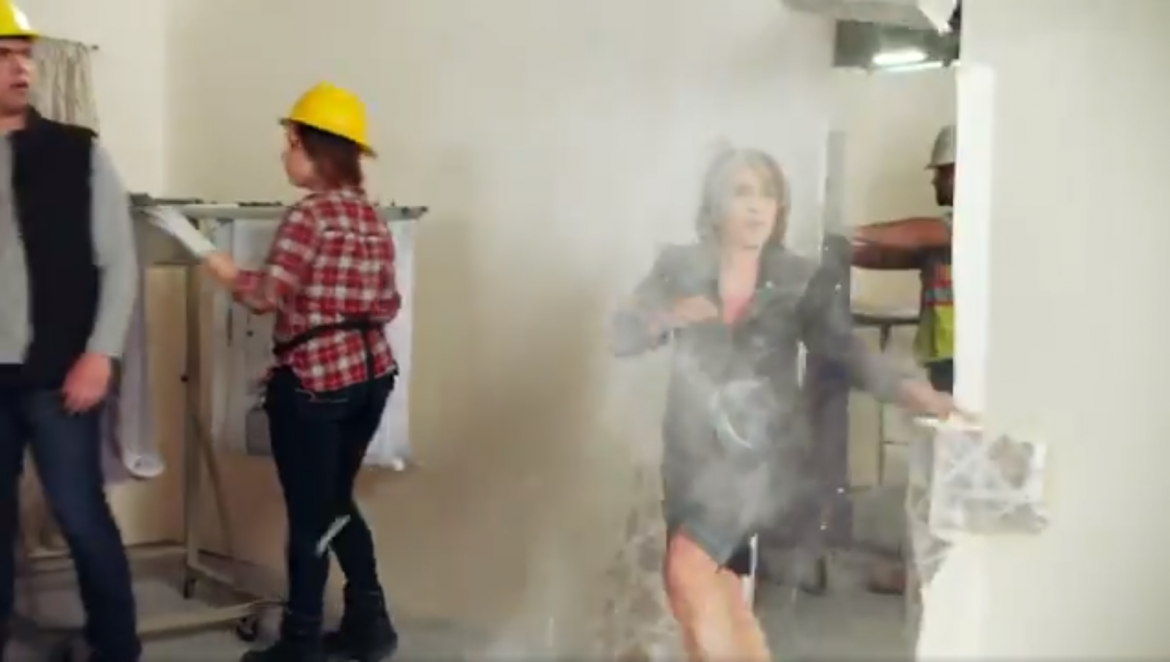 A screenshot from an ad put out by Michelle Lujan Grisham on Twitter.

New Mexico Gov. Michelle Lujan Grisham does her own stunts.

In high heels, no less.

As President Donald Trump delivered the State of the Union address Tuesday night, Lujan Grisham released a never-before-seen political ad on Twitter that shows the diminutive Democrat smashing through walls in high heels while talking about breaking barriers to improve New Mexico.

In the ad, the president took a hit, too.

“And here’s what I think of Trump’s wall,” Lujan Grisham says at the end of the ad before she shatters drywall that held the president’s portrait.

A spokesman said the ad was filmed during Lujan Grisham’s campaign for governor but never aired. Though it was originally intended for a New Mexico audience, Tuesday night apparently presented an opportunity to show it to the world.

And the world took notice.

All of this talk about walls tonight… #SOTU pic.twitter.com/QFLAYHor0t

Lujan Grisham timed the release of the 32-second video — which went viral on Twitter, generating more than 800,000 views in less than 24 hours — to coincide with the president’s State of the Union address, in which he continued to push for the construction of a wall on the U.S.-Mexico border.

“Releasing that was really about pushing back, if you will, breaking through this notion of a campaign promise of a 2,000-mile wall that is nothing more than — I mean, what, we found three tunnels?” the governor said Wednesday.

“Why are we debating things that don’t work and that people don’t want universally? Why aren’t we having a fair, productive debate about the things that should and can and could work?” she added.

By strategically releasing the ad to coincide with the State of the Union, Lujan Grisham said she was able to get her point across in a way that wasn’t angry or mean.

Political observers, activists and national media scurried to the story.

“The timing of the release was smart given the State of the Union and people’s attention to border issues, particularly,” Albuquerque-based pollster Brian Sanderoff said. “The ad’s going viral, so it accomplished its objective of grabbing some attention — and all in heels, right?”

The video had received more than 16,400 “likes” and had been retweeted more than 5,100 times as of 5:30 p.m. Wednesday on the governor’s Twitter account alone.

Among those sharing it were civil rights activist Shaun King, who has more than 1.1 million followers, and MSNBC journalist and anchor Katy Tur, who interviewed Lujan Grisham and aired the ad on her show Wednesday morning.

“While we poked a little fun at governing and making sure that you’re breaking through barriers, it was certainly intended to show what good decisions can look like versus bad decisions that are based on politicking in the worst possible way by President Trump,” Lujan Grisham told Tur.

“Well, it certainly got a lot of attention,” Tur responded. “What also is getting attention is your decision to remove National Guard troops from your state.”

On Tuesday, hours before the release of the ad, the governor announced she had ordered the withdrawal of a majority of National Guard troops from the border. Unlike the ad, however, the timing of announcement wasn’t meant to coincide with the president’s speech, said Nora Meyers Sackett, a spokeswoman for the governor.

“She had requested information and data from both the National Guard and the Border Patrol that took a while to get to her,” Meyers Sackett said. “She recently got that information and … as soon as she had the information to make that decision, she did so and announced it.”

The announcement generated significant attention. But the political ad made Lujan Grisham a star in the Twitterverse.

The video sparked mixed reactions online — from complimentary to mean and everything in between.

“Try a metal wall next time,” a Twitter user with the handle @blktieaffair_rg tweeted.

“NM has now become a possibility for my next move into retirement. Thank you Governor,” tweeted @dolfin513, whose avatar is a photo of Speaker of the House Nancy Pelosi pictured in her now-infamous State of the Union clap.

“I sure hope you did this in one take,” tweeted @MichaelRWear.

“It did take multiple takes,” Meyers Sackett said. “It wasn’t done in one take.”

The ad was produced by Democratic media consultant Mark Putnam, whose firm has worked on five presidential campaigns, including former President Barack Obama’s and former New Mexico Gov. Bill Richardson’s, according to the firm’s website. His firm, Putnam Partners, has worked with Lujan Grisham in the past. It produced the ad of Lujan Grisham rollerblading across her old district when she was running for re-election to the U.S. House.

“New Mexico is 49th in employment and 50th for schools. We got to bust through some walls to make changes,” Lujan Grisham, who is wearing a dark blue suit, says in the ad while putting on a pair of clear safety glasses and sprinting toward the first wall.

In the next scene, Lujan Grisham emerges covered in drywall dust, the kind more commonly seen in one of those home improvement shows.

“I’ll create public and private partnerships to rebuild our infrastructure,” she says before sprinting through another wall.

“We need more apprenticeships and skills training,” she continues, while busting through another wall and into a classroom scene as a handful of children — some with their eyes and mouths wide open — look on.

“And we have billions in the permanent fund to invest in schools and small businesses,” she says before darting toward the wall with Trump’s portrait.

Meyers Sackett said the governor didn’t use a body double or stuntwoman.

“That is legit footage of her running through drywall,” she said. “She did it herself.”

She also managed to stay upright while blasting through the obstacles — no easy feat in a pair of shoes Meyers Sackett described as a “strappy heel.”

“She displayed her heel nimbleness as she ran so efficiently on them,” Meyers Sackett said. “She’s pretty good on heels.”

Milan Simonich contributed to this report.