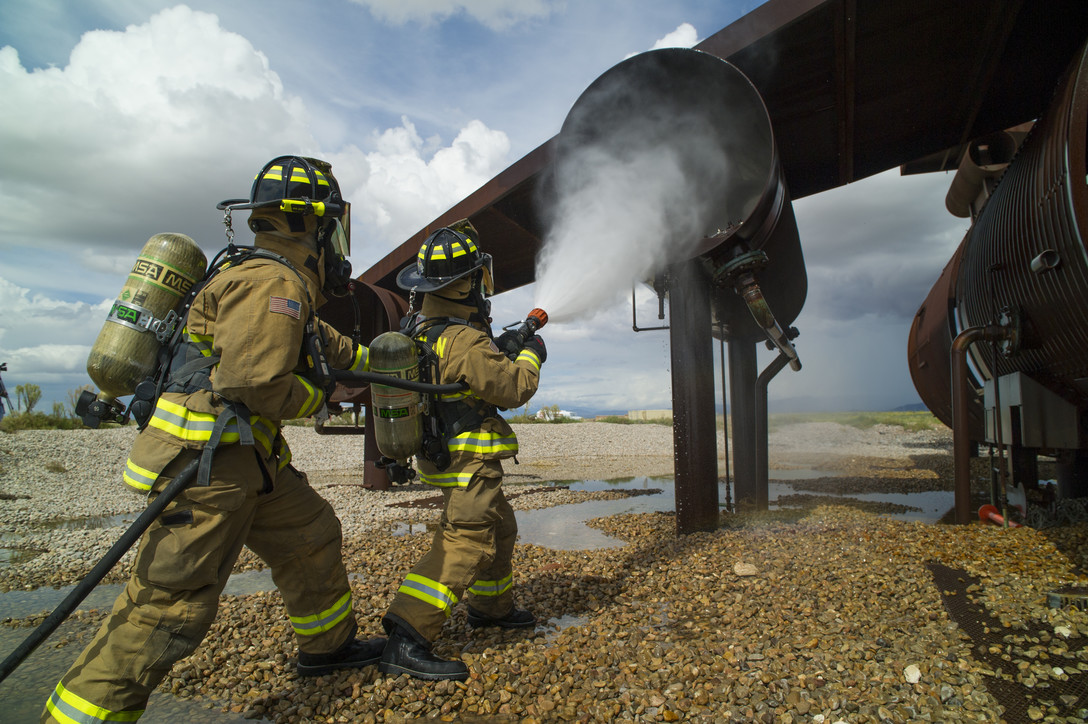 The state of New Mexico has responded to reports of groundwater contamination at yet another Air Force base—this time, Holloman Air Force Base.

On Wednesday, the New Mexico Environment Department (NMED) issued a notice of violation against the U.S. Air Force over groundwater contamination at Holloman, which sits on nearly 60,000 acres just outside the City of Alamogordo.

“We are dismayed by the Air Force’s lack of prompt response to the contamination found at Holloman and will use all avenues available to us to hold the military accountable and make affected New Mexicans whole again,” said NMED Secretary-designate James Kenney in a press release from the department. “This Notice of Violation is a step toward ensuring that happens.”

A November 2018 Air Force site inspection report showed contamination levels in some areas at Holloman are 18,000 times the federal limit for PFAS.

PFAS, or per- and polyfluoroalkyl substances, are a class of human-made chemicals, and include perfluorooctanoic acid (PFOA) and perfluorooctane sulfonate (PFOS). The human health advisory—for a lifetime drinking water exposure to PFAS—is 70 parts per trillion, or 70 nanograms per liter.

Under state law, NMED issues groundwater discharge permits to military installations, national laboratories, businesses and others. Under these sorts of permits, the state specifies the maximum allowable contamination of waters. If pollution exceeds those levels, permittees need to have a cleanup plan.

In the letter to Col. Joseph Campo, the commander of Holloman Air Force Base, NMED’s Groundwater Bureau Chief Michelle Hunter wrote that failure to comply with the state’s notice of violation could result in $15,000 per day in civil penalties, or “action in district court.”

According to Tripp Stelnicki, director of communications for Gov. Michelle Lujan Grisham, the governor spoke with Air Force Secretary Heather Wilson on Wednesday. The state’s entire congressional delegation was on the call, he said, along with Kenney and New Mexico Department of Agriculture Secretary Jeff Witte.

“The New Mexico delegation and governor expressed their frustration and displeasure with the continued lack of response and communication from the Air Force regarding water contamination at not only Cannon but Holloman directly to the secretary,” Stelnicki said on Wednesday. “The governor feels it is unacceptable for the responsible party to be as unresponsive as it has been to the needs of New Mexicans and to the state’s pressing concerns, as expressed today.”

Wilson represented New Mexico’s First Congressional District in the U.S. House of Representatives from 1998 to 2009.

Stelnicki added that the governor and NMED are evaluating “other potential actions,” but the preferred course would be “coordinated action between the state and Air Force.” But, he said, “it is now incumbent on the Air Force to reach out and work with the state, as we have sought to do.”

At the time, NMED issued a notice of violation against Cannon and began working with the Air Force on wrapping PFAS cleanup into Cannon’s hazardous waste permit from the state. The Air Force responded in January by suing the state of New Mexico, challenging NMED’s authority to compel PFAS cleanup under the state permit.

“We also know it’s not affecting our drinking water,” she said. “We have to be vigilant and safe, but also realistic about what’s happening right now.” The drinking water people have access to right now is safe, she said, but the Air Force needs to be more responsive to community concerns.

In 2016, EPA established guidelines for exposure to PFAS. The human health advisory set the lifetime drinking water exposure limit at 70 parts per trillion, or 70 nanograms per liter. But now the agency is backing away from plans to create a formal drinking water standard for PFAS.

New Mexico’s congressional delegation has pushed back against EPA on that issue. They are joined by other senators and representatives nationwide, whose districts have contaminated groundwater from military bases.

According to the EPA, health impacts from exposure to PFAS can include thyroid disorders, pregnancy-induced hypertension and preeclampsia, cancers, high cholesterol, increased liver enzymes, decreased vaccination response and reproductive and developmental complications.

The contamination is linked to firefighting foams used beginning in the 1970s to extinguish petroleum-based fires. (PFAS were also used in food packaging, nonstick products like Teflon and cleaning supplies.) The U.S. has since phased out the manufacture of many PFAS chemicals, but the health impacts from exposure remain. The compounds move through the groundwater, and they’re persistent. They also bioaccumulate, or move up the food chain, accumulating more and more within each species.

They called for the Air Force to respond more urgently to the contamination at both Cannon and Holloman, and said they would work with Wilson “to ensure the Air Force moves quickly to determine the full extent of PFAS contamination and take substantive action to protect the health of impacted communities and our servicemembers.”

They added, “New Mexico is a proud and welcoming host to three Air Forces bases, and we are entitled to accountability and access to safe, healthy water for households and businesses in our communities. We will pursue this and push the Air Force until it is achieved.”