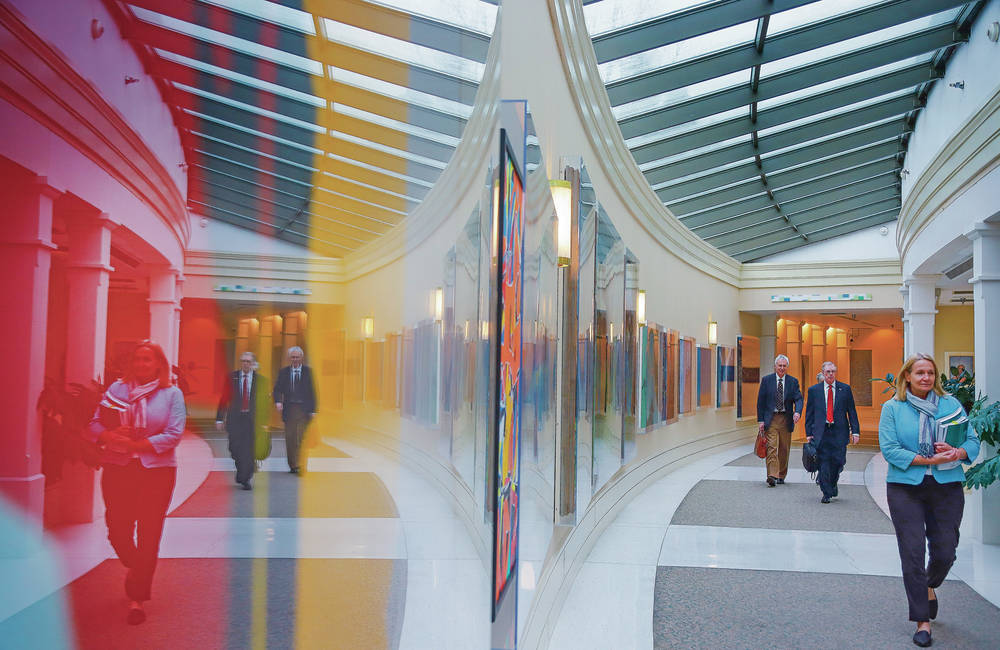 Prison profits: Gov. Michelle Lujan Grisham’s inaugural committee says it will give a donation from the private prison company Geo Group to charity.

The Florida-based firm runs several prisons in New Mexico and has contributed to politicians on both sides of the aisle.

Democratic politicians have faced awkward questions about financial contributions from the private prison industry amid outrage over the federal government’s zero-tolerance policy toward undocumented migrants. Companies like Geo Group have stood to gain from the federal policy.

Lujan Grisham, a former leader of the Congressional Hispanic Caucus, has been an outspoken critic of federal government’s stand and has said she wants greater oversight of private prisons in New Mexico.

So, when Geo Group was listed among the donors towards her inaugural events, The New Mexican asked whether the committee would return the donation.

“The governor’s position on private prisons is well known,” Elizabeth Collins, a spokeswoman for the inaugural committee, said in an email. “Geo Group, as a company doing business in New Mexico, chose to make a contribution to the Inaugural Committee and the committee accepted it. We will be including Geo Group’s contribution in the donations the Inaugural Committee makes to charities and nonprofits.”

Spring forward — or fall backward: A bill to eliminate daylight saving time is breezing through the state House of Representatives.

Sponsored by Rep. Roberto “Bobby” Gonzales, D-Taos, the bill would have New Mexico join Arizona in opting out of the annual springing forward and falling backward.

Gonzales, a former school administrator, said the change would make it safer for students waiting for buses.

The idea has support from the Farm and Livestock Bureau, too.

But Southern New Mexicans aren’t wild about the bill, noting it would put residents of communities such as Hobbs and Clovis two hours behind neighboring Texas during certain times of year.

Nonetheless, the House Judiciary Committee voted 10-3 to advance the measure. It goes next to the full House of Representatives.

The bill appears to be on a collision course with Senate Bill 226, which would put New Mexico on daylight saving time permanently.

The House Commerce and Economic Development Committee voted 6-4 to advance it. Republicans dissented.

Though the bill does not include an appropriation, a representative of the Regulation and Licensing Department said it would cost about $284,000 to fund those three positions.

Bonnie Latreille, director of research and advocacy for the Washington, D.C.-based Student Borrowers Protection Center, told the committee that about 200,000 New Mexicans are struggling with student debt. One in five is over age 50.

The bill next goes to the House Appropriations and Finance Committee.

Another month, please: The Senate Rules Committee unanimously advanced a bill on Monday to honor writer Rudolfo Anaya and promote reading among children.

Anaya, born in Pastura outside Santa Rosa, may be best known for his novel Bless Me, Ultima. He is the recipient of the National Humanities Medal and the National Medal of Art, among other recognitions.

Sen Pete Campos, D-Las Vegas, introduced Senate Bill 270 to recognize Feb. 14 as “Rudolfo Anaya I Love to Read Day.” But several senators said February is already chock full of such days of honor, including American Indian Day, African American Day and Hispanic Culture Day. They asked Campos to consider changing the date to another month so Anaya, 81, doesn’t get lost in the shuffle. Campos said he will consider the idea.

Jennifer Schroer, the state’s secretary of tourism, said her goal is to “make New Mexico the top destination in the Southwest.”

She previously worked in the Tourism Department in Republican Gov. Susana Martinez’s administration.

David Scrase, secretary of the Human Services Department, said his priority is improving behavioral health programs and enrolling eligible New Mexicans in the state’s Medicaid program. Scrase was a practicing doctor and a professor at the University of New Mexico School of Medicine.

Quote of the day: “Usually people have to die before people gather in a room to say nice things like this.” — Sen. Daniel Ivey-Soto, D-Albuquerque, on the wave of testimonials for Cabinet secretaries Schroer and Scrase.