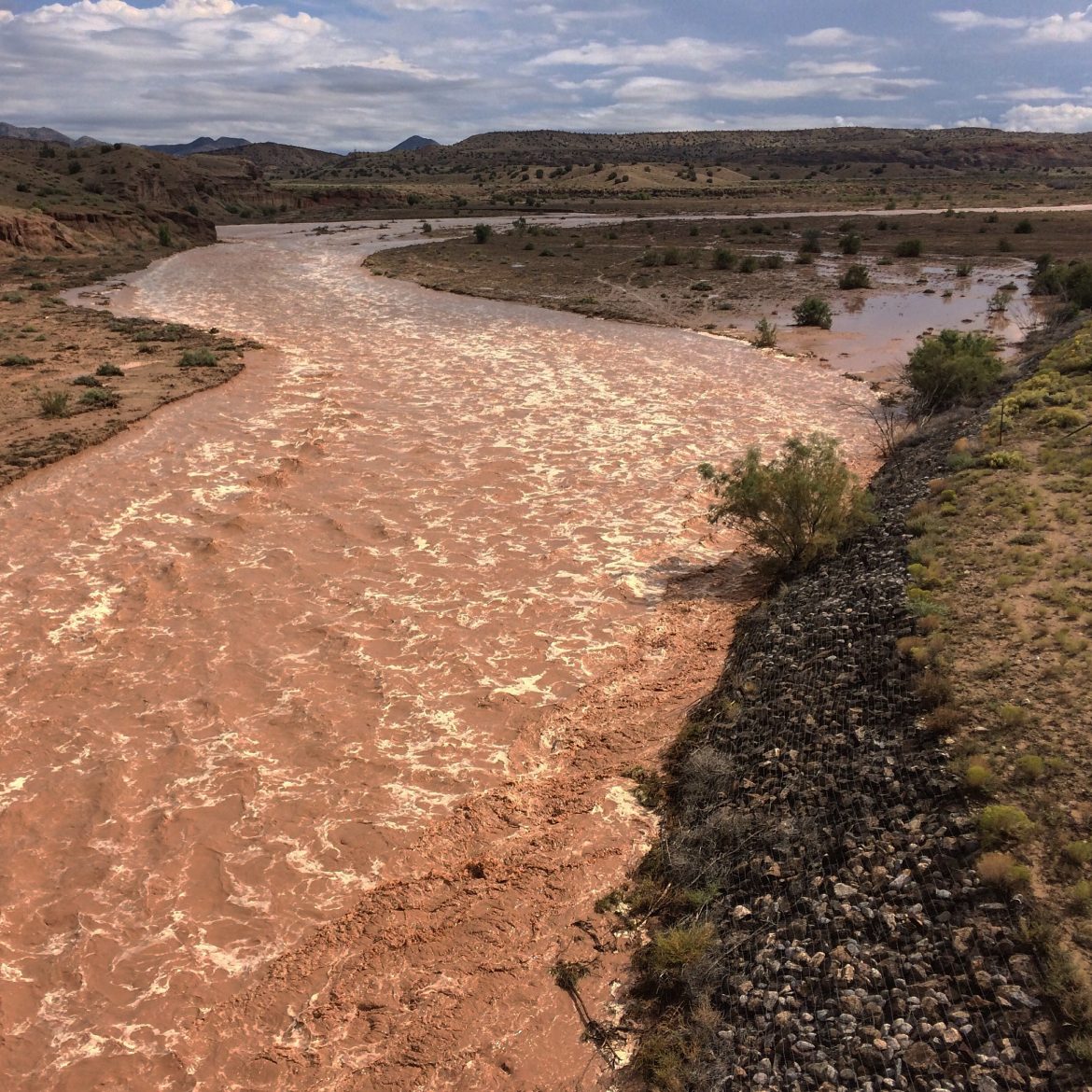 The normally dry Rio Galisteo after an October 2017 rainstorm

“Oh my God,” I can’t stop myself. Even though I know the checker wasn’t expecting anything more than the requisite, “Fine and you?” response.

I launch into a hand-waving homage to the day: I just got back from the Sandias, where there’s this little spring, and I learned the coolest thing. Scientists can tell if springs, like that come out of the mountain…they can figure out if that groundwater came from summer monsoons, or from winter snowmelt. Because get this: They study the water’s isotopes. Then, because our winter storms and our summer storms come from different places in the ocean, you can tell where the water originated and what season the water fell, as snow or summer rain, before it became groundwater!

The young man stares at me. He’s handed me a receipt. And the line of shoppers behind me is growing restless.

But I swear he’s ensorceled, too: imagining faraway oceans and wild storms, and waters trickling from the granite and limestone mountains that frame our city.

Somewhere between the Sandias and the checkout lane, the Pacific Ocean and New Mexico’s groundwater lies the intersection of science and wonder. And policy, too, I believe. Embracing wonder reminds us to protect the world around us. Nature serves us with drinking water and all we’ve ever needed. But it also inspires us, connects us and makes us think about things that are bigger than us and smaller than us and all around us.

Wonder smacked me upside the head when visiting Tunnel Springs with the University of New Mexico’s Clifford Dahm earlier in the day. We were filming our most recent episode of Our Land for New Mexico In Focus, about temporary waterways.

Tunnel Springs is just one little spring popping out of the mountainside. But it has a place—within the hydrologic cycle, within our history and culture and even in a broader political debate playing out today.

Worldwide, about 50 percent of waterways are temporary, Dahm explained. And in New Mexico, the number is even higher: About 90 percent of our streams are ephemeral or intermittent.

The study of temporary waterways is drawing more interest, worldwide, he explained. That’s in part because more and more waterways are becoming temporary. As surface waters and groundwater are both strained by drought, climate change and overuse, many once-perennial streams and springs are now diminished.

But they still remain vitally important.

Some of the state’s biggest waterways and tributaries to the Rio Grande—like the Rio Puerco, Rio Galisteo and the Rio Salado—are temporary.

Intermittent streams are like Tunnel Springs: They have a baseflow from groundwater recharge, but they might not flow above-ground throughout the entire year. Ephemeral streams, like the Galisteo, flow only in response to snowmelt or rainfall.

The differences in these categories recently became pretty important.

Under the Clean Water Rule, the federal government also protected some streams, rivers and wetlands that are “non-navigable,” or don’t flow year-round.

Now, the Trump administration’s version of the rule would no longer protect ephemeral streams, and it proposes removing protections from intermittent streams, too. Most of New Mexico’s wetlands—like wet mountain meadows that aren’t connected to a flowing stream—wouldn’t be protected. Nor would playas or waterways within closed basins, which include about one-fifth of New Mexico’s landmass.

The lack of protections leaves waterways vulnerable to all sorts of threats, including mining waste, produced water from drilling, gravel operations and landfills, as well as pollution from military bases, federal facilities like nuclear weapons labs, wastewater treatment plants and others.

Temporary waterways empty into larger rivers, like the Rio Grande or the Pecos River. But they’re important on their own, too. They support ecosystems and wildlife. And New Mexicans have relied upon tiny springs and streams for centuries. People planted orchards and fields. Villages and towns grew up around them. They gave us drinking water. And a sense of home.

At Tunnel Springs, Dahm measured the flow from the ground by filling up a water bottle while I timed him. He did the math: it was flowing that day at roughly two-and-a-half gallons per minute. Hardly Niagara Falls. Yet all around, there’s evidence of the spring’s significance: from the giant cottonwood tree across the road to the walls built by WPA workers in the 1930s, below which the spring cultivates a small patch of water cress before petering out after a few meters.

Staring up at the mountainside, the production crew and I ask Dahm where the water comes from.

For just one section of her dissertation, Frus studied 78 springs in the Cibola National Forest to map their location and study their geology, geomorphology, spring type and wetland habitat. For the springs that were actively running, she also collected samples for hydrogeochemical analysis—to figure out, among other things, if the groundwater is recharged via snowmelt or monsoon storms. That work builds on that of many others, including Zachary Sharp, who directs the UNM Center for Stable Isotopes and is a professor in UNM’s Earth and Planetary Sciences Department.

Dahm also described another study, which the Earth and Planetary Sciences Department’s Laura Crossey co-authored. They analyzed four New Mexico springs and the presence of gases that originate in Earth’s mantle within their waters. Those hot springs in the Jemez aren’t just soothing. These “continental smokers” offer a window into the Earth’s mantle, and entire ecosystems of microorganisms.

It’s dizzying, really, to think about all we’re able to learn—and ask—about the world around us, even those parts of the world we can’t actually see.

And yet, the rate at which we’re destroying the world we’re learning about is disheartening.

Over winter break, I picked up Carl Sagan’s classic 1985 novel, Contact. (Which is way more interesting than the Robert-Zemeckis-directed movie, by the way.) There’s a passage I haven’t been able to get out of my head, in which Sagan writes about “cosmic isolationism”—of how “[w]ithout even noticing, just as astronomy entered a golden age, most people cut themselves off from the sky”:

At the very moment that humans discovered the scale of the universe and found that their most unconstrained fancies were in fact dwarfed by the true dimensions of even the Milky Way Galaxy, they took steps that ensured that their descendants would be unable to see the stars at all. For a million years humans had grown up with a personal daily knowledge of the vault of heaven. In the last few thousand years they began building and emigrating to the cities. In the last few decades, a major fraction of the human population had abandoned a rustic way of life. As technology developed and the cities were polluted, the nights became starless. New generations grew to maturity wholly ignorant of the sky that had transfixed their ancestors and that had stimulated the modern age of science and technology.

It’s the same with water, too. And wildlife and ecosystems. And the connections between all those things and us.

We are learning so much. And yet, we hunker inside, looking at screens instead of noticing the sunset, the phase of the moon or even the species of birds migrating through our neighborhoods. We think of arroyos flooding as a nuisance because we’ve built our houses too close to them. When rivers move across their very own floodplains, we race to contain them. Brackish water—groundwater too salty to drink or use for irrigation—is considered worthwhile only if it can be exploited economically, pumped and desalinated.

And when springs dry up, or groundwaters become contaminated, we hardly notice—or care—unless it affects our drinking water.

But we can embrace a greater vision than that.

While in the Sandias up above Placitas, we followed Dahm while he hunted for another spring, not flowing in early February, that he and his wife had spotted on an earlier trip.

Downstream from Tunnel Springs, we explored a string of cottonwood trees, cattails and other vegetation markedly different from the surrounding conifers. Passing through the cattails, we scrambled around huge cottonwood trees, their roots and trunks gobbling up the stones people had stacked decades, or centuries, ago to slow and contain water from the various springs.

It was a reminder of times past, when every drop was precious.

New Mexico’s waters should be protected—and marveled over—not just because we need them for drinking water. But because without them, we lose our ties to the past. Our imaginations are diminished. And our future, uncertain.

This piece was reported in partnership with New Mexico In Focus. To watch this month’s episode of “Our Land: New Mexico’s Environmental Past, Present and Future,” visit here. To see all the episodes, visit the series website.

UPDATE: Early Thursday morning, the U.S. Army Corps of Engineers and the U.S. Environmental Protection Agency released to the Federal Register the official revised definition of the “Waters of the United States.”