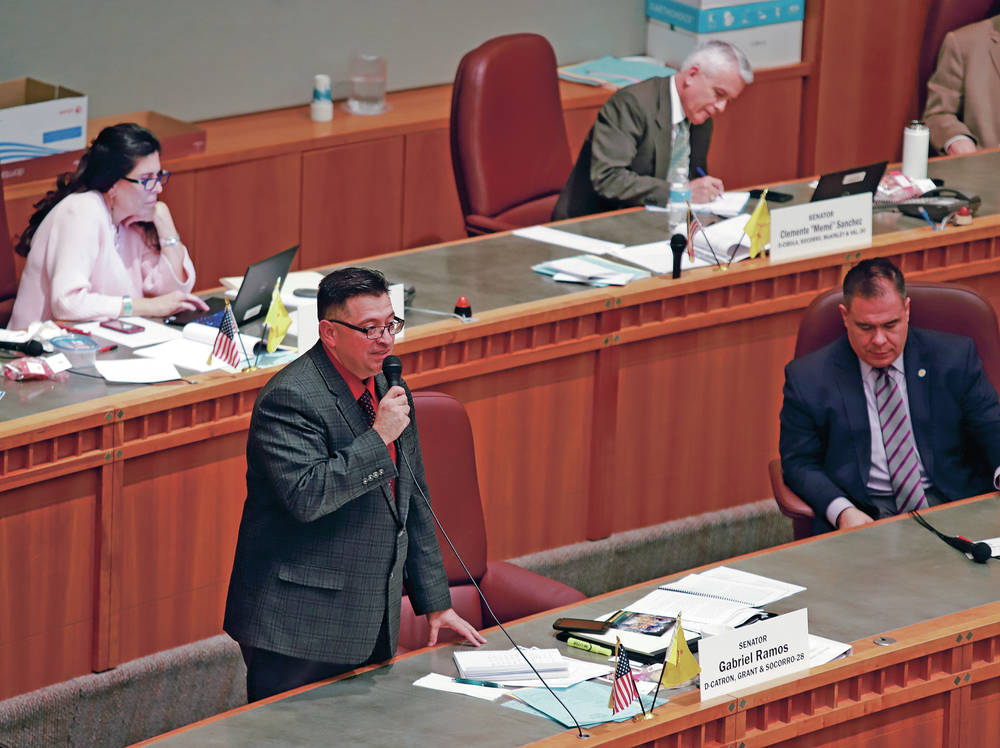 State Sen. Gabriel Ramos, D-Silver City, speaks in opposition of Senate Bill 8 on Thursday. Ramos was one of the four Democrats who voted against the bill, which would prohibit the sale of a firearm without conducting a federal instant background check. The Senate approved the measure.

The state Senate narrowly approved a bill Thursday that would require just about anyone buying a firearm to undergo a background check.

This legislation has been a priority for gun control advocates, but all 16 Republicans and four Democrats in the Senate said it would not prevent the sort of mass shootings that have spurred calls for such laws.

Scheduled for the first anniversary of a school shooting in Parkland, Fla., that left 17 people dead, the Senate’s vote was the biggest test yet for gun control during this legislative session.

Majority Democrats won the day on a 22-20 vote.

Senate Bill 8 now heads to the state House of Representatives, which already has passed a law on background checks this year and might approve this measure. But while gun control proponents have an ally in the Governor’s Office again for the first time in years, a three-hour debate in the Senate demonstrated the issue still divides sections of the Democratic majority, calling into question whether legislators could pass more expansive laws.

Sponsored by Sens. Richard Martinez, D-Española, and Peter Wirth, D-Santa Fe, SB 8 would prohibit the sale of a firearm without conducting a federal instant background check if the sale is made for a fee.

Proponents say the measure would merely close what they call a loophole.

A gun buyer has to undergo a background check when shopping at a retail store such as Cabela’s. But there is not necessarily the same requirement for sales between two private individuals. This can allow buyers to get a firearm from an acquaintance or a person they met online without undergoing a background check.

“Do we not see the inconsistency to banning, limiting and restricting sales but only when you’re buying at a commercial establishment?” Sen. Joseph Cervantes, D-Las Cruces, asked his colleagues during the debate.

But Republicans say the legislation would merely be a burden to gun owners who want to obey the law.

Under SB 8, buyers and sellers would have to seek out and pay for a background check through a federal firearm licensee. Critics say this proposal relies on firearm buyers and sellers following through on the process, contending the law is effectively unenforceable.

While the Senate vote coincided with the anniversary of the Parkland killings, the gunman in that case had purchased his weapons legally from a retailer and passed a background check.

“I’m not at all opposed to keeping guns out of the bad guys’ hands. This bill doesn’t do that,” said Sen. Bill Sharer, R-Farmington.

Legislators narrowed the law’s scope Thursday, too, amid concerns the bill would require background checks when family members exchange guns.

Under the version approved by the Senate, gun sales between immediate family members would be exempt from background checks.

And the version passed by the Senate says those licensed to conduct background checks cannot charge an unreasonable fee for doing so or refuse to perform one for a private party.

The four Democrats who voted against the bill all represent rural districts. They are Sens. George Muñoz of Gallup, Gabriel Ramos of Silver City, John Arthur Smith of Deming and Clemente Sanchez of Grants.

Enacting gun control legislation was a big campaign promise for Democrats in the last election, which came after Parkland and a 2017 shooting in the northwestern New Mexico community of Aztec that left two students dead. Such shootings have fatigued many but galvanized gun control proponents. And after Democrats won eight more state House seats in last year’s election as well as the governor’s office, gun control has real political prospects for the first time in years.

The vote on SB 8 came the day after the state House of Representatives approved a bill creating a process for a household member or law enforcement officer to get a judge’s order for seizing the firearms of a person believed to be an immediate danger to themselves or others.

“This is a first step and an important step in our public safety enhancement effort,” Gov. Michelle Lujan Grisham wrote to senators in a message that was read aloud before Thursday’s debate, urging them to pass SB 8.