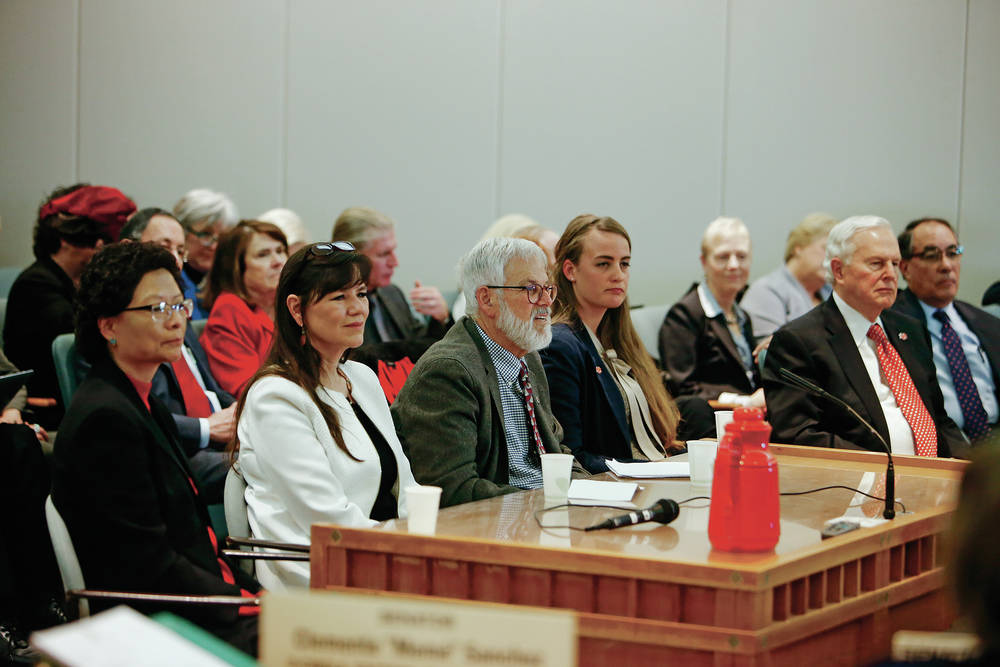 The governor's five appointees for the Board of Regents at UNM appeared before the Senate Rules Committee on Friday, February 15, 2019. The full Senate later approved the new regents.

The state Senate voted Friday to confirm Gov. Michelle Lujan Grisham’s five nominees to the University of New Mexico Board of Regents, an unusually fast decision that came just six days after she announced her choices.

The Senate Rules Committee, which is responsible for background checks on gubernatorial nominees for high-level jobs, considered the candidacies of all five during a three-hour hearing. Then the full 42-member Senate confirmed all of them without dissent.

The new regents are:

o Kimberly Sanchez Rael, whose background is in business. She will serve a six-year term.

o Sandra K. Begay, who most recently worked on development of renewable energy at Sandia National Laboratories’ Indian Energy Program. Her term is for four years.

o Robert Schwartz, who has more than 40 years of experience teaching law. He will serve a six-year term.

o Douglas M. Brown, who heads Brown and Brown Ventures in Albuquerque. He served on the UNM Board of Regents from 2003 to 2005. He will serve a four-year term.

o Melissa C. Henry, a licensed mental health counselor, who is the student regent. Her term is for two years.

All five said they were eager to serve an institution that means a good deal to them.

Rael, who spent her teen years in Raton, said she was excited to finally become a Lobo. She explained that upon graduating high school she had two options for college: Harvard University or the University of New Mexico. Harvard was her second choice, she said, until one of her teachers told her “you can’t not go to Harvard.”

Begay, who grew up on the Navajo Nation and attended UNM, said she was not happy with the “turmoil” that had enveloped the school in recent years. She stressed her ability to work as a collaborative peacemaker with other board members and the president.

Brown, who has run banks and for-profit organizations, said he wants to help UNM become “an engine of growth for the state and enterprise.”

Henry, who was born in Clovis, Calif., said attending the University of New Mexico drew her to the state and that she wants to provide a voice for students.

Governors have historically chosen supporters and campaign donors for seats on boards of regents. Sen. Cliff Pirtle, R-Roswell, asked if any of the five had donated to Lujan Grisham’s campaign last year.

Begay and Henry did not contribute to the governor’s campaign.

Sen. Mary Kay Papen, D-Las Cruces, was concerned about a different executive, UNM President Garnett Stokes, who’s been on the job for just under a year.

“Please be supportive of the university president,” Papen said.

The regents, who are supposed to oversee the president, were diplomatic in responding to Papen’s plea.

Schwartz said he believed Stokes is doing a very good job so far. “But I don’t know the job well enough or her well enough to offer more of an opinion at this point,” he said.

Stokes, who attended the committee hearing, stood in support of all five of her new bosses.

Sen. Mark Moores, R-Albuquerque, told the incoming regents to be independent thinkers and to stand against external pressure when making decisions.

None of the Rules Committee members talked about the reduction in sports teams.

After the hearing, several of the new regents said they would not second-guess the decision to drop the athletic programs.

Brown said he hoped that sometime down the line UNM could bring those programs back.