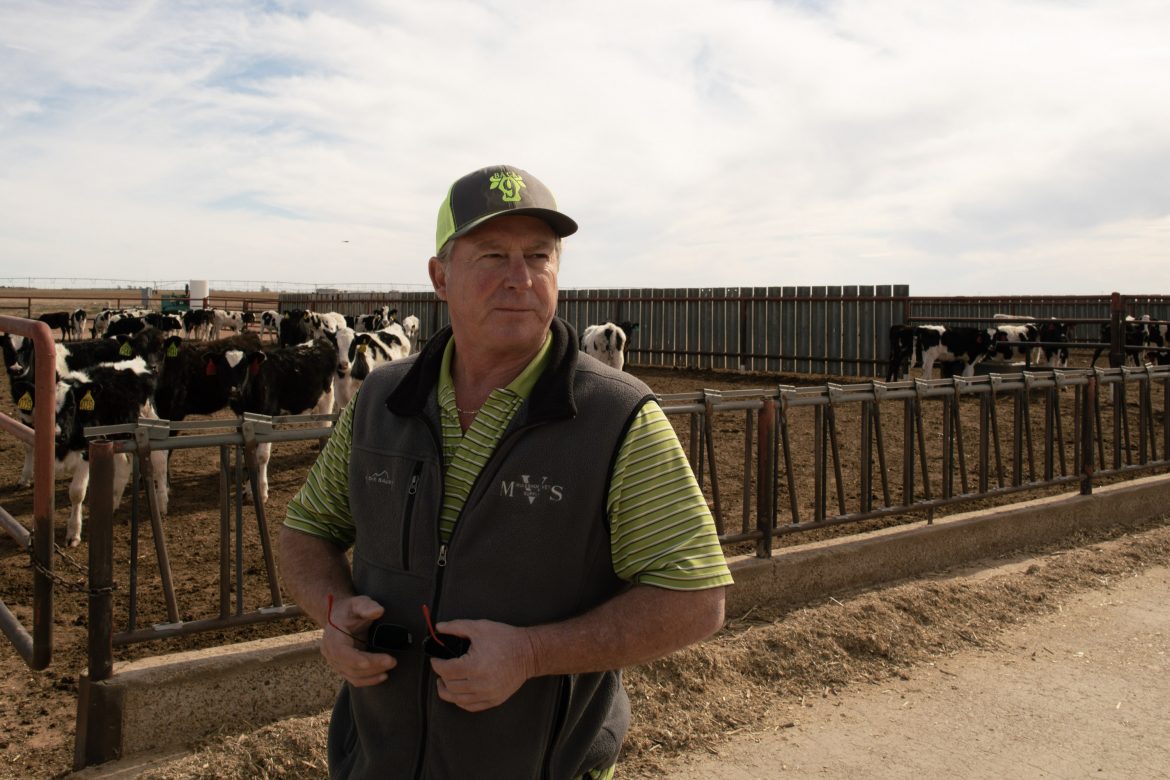 Art Schaap looking over some of the 1800 Holstein cows on the Highland Dairy in Clovis.

For months, Clovis dairy farmer Art Schaap has been watching his life go down the drain. Instead of selling milk, he is dumping 15,000 gallons a day – enough to provide a carton at lunch to 240,000 children. Instead of working 24/7 to keep his animals healthy, he’s planning to exterminate all 4,000 of his cows, one of the best herds in Curry County’s booming dairy industry.

The 54-year-old second-generation dairy farmer learned last August that his water, his land, his crops – even the blood in his body – were contaminated with chemicals that migrated to his property from nearby Cannon Air Force Base.

See all of NM Political Report’s coverage on PFAS contamination.

The toxins, collectively known as PFAS, have caused rampant pollution on military installations, something the Department of Defense has known about for decades but routinely failed to disclose. Now the state’s dairy industry is ground zero in an unprecedented crisis. For the first time ever, PFAS is threatening the U.S. food supply.

There is plenty the Air Force could have said. It has for decades been aware that PFAS chemicals are toxic to humans, animals and the environment. By 2000, industry scientists and the Environmental Protection Agency had meticulously documented that the compounds persist in the environment for millennia. They are linked to cancer, thyroid disease, lowered immunity and developmental disorders, among other serious health problems.

They have poisoned the groundwater on at least 121 U.S. military installations, the DOD disclosed in 2018. Several of those sites are located in New Mexico.

The contamination casts a long shadow over New Mexico’s all-important dairy business – the leading agricultural industry in the state, generating more than $1.3 billion annually. Curry County is one of the nation’s top milk producers. Home to 86,000 milk cows, it boasts 25 dairies that sell nearly 8 billion pounds of milk around the country.

Schaap’s dairy is ground zero, but this may soon change. The toxic plume is spreading slowly and inexorably – not only under Schaap’s fields but across the Ogallala Aquifer, the largest aquifer in the nation, which spans 174,000 miles and parts of eight states.

Based on more than a dozen interviews and an examination of more than 100 chemical studies, government reports and court cases, Searchlight New Mexico discovered that:

“This is a national contamination crisis at this point, and we’ve really only scratched the surface in understanding how large of an impact it’s having on health, both in highly contaminated communities like Clovis and across our entire population,” said David Andrews, a senior scientist for the Environmental Working Group, which leads a campaign to regulate PFAS chemicals.

The PFAS family contains thousands of compounds known as per- and polyflouroalkyl substances. The best-known are perfluorooctanesulfonic acid (PFOS) and perfluorooctanoic acid (PFOA), but scientists believe the more obscure varieties pose health and environmental risks as well. These chemicals “seem to have the ability to harm an incredible number of different biological processes, and often at incredibly low concentrations,” Andrews said.

On Jan. 23, in Albuquerque, Sen. Tom Udall met with Schaap, four neighboring dairy farmers and representatives from the Dairy Producers of New Mexico and vowed to find solutions. A long list of New Mexico lawmakers – from Gov. Michelle Lujan Grisham to U.S. Rep. Ben Ray Luján and Sen. Martin Heinrich – have taken up the cause.

So have authorities at the local level.

“Property values are going to go down, and that’s going to hurt the tax base,” said Seth Martin, a Curry County Commissioner and a dairy farmer himself. “That’s something we really have to be prepared for.”

Udall, Heinrich and other New Mexico lawmakers have for months called on the Environmental Protection Agency to develop federal regulations and drinking water standards for PFOS and PFOA, the chemicals that are front and center in the Clovis crisis.

The EPA on Feb. 14 announced its intention to regulate the chemicals by year’s end, but the agency’s plan does not include immediate cleanup actions and has been widely criticized as foot-dragging.

The EPA has failed for 20 years to regulate PFAS or any other new hazardous substance for drinking water, advocates have noted. In 2016, it issued a “lifetime health advisory” for PFOA and PFOS, recommending that individual or combined concentrations of the chemicals in drinking water should be no greater than 70 ppt. (One part per trillion is roughly equivalent to a grain of sand in an Olympic-sized swimming pool.)

Its reluctance to act on PFAS – used not only in firefighting foam, but also in non-stick cookware and hundreds of other products – comes despite the dogged efforts of environmental advocates like the EWG and lawmakers from states like Michigan, New York and Pennsylvania, where contamination is profound.

Though the NMED has known of the threat since at least 2017, it neglected to contact the community and its many dairy farmers. Milk was bought and sold, crossed state lines, mixed with that from other dairies, and consumed in vast quantities before Schaap’s Highland Dairy was informed of a problem.

The thought of a contaminated milk supply horrifies Schaap. “It’s potentially been in the groundwater the whole time I’ve owned the dairy,” he said.

For years he watched from his fields as trainees at Cannon Air Force Base set fire to mock airplanes and smothered the flames with clouds of PFAS-laced firefighting foam. The chemicals make the foam resistant to grease, water, dirt and heat, which makes it extremely effective at snuffing out jet-fuel fires.

The Air Force says it is going above and beyond to address the contamination.

“I really want to emphasize this: Our focus is drinking water for human consumption – not for agriculture, not for anything else,” Air Force spokesman Mark Kinkade told Searchlight.

For Schaap, the impact is personal. He has already laid off 40 employees and is now preparing to euthanize his cattle. With no income, he can’t afford to buy feed, which costs him $350,000 a month. He says he can’t even sell his cows for dog food.

And he and his wife potentially face health problems, some of which could be life-threatening.

“I don’t care what they do, my property will never have the same value again,” Schaap said. “Who wants to live in a community with contaminated water?”