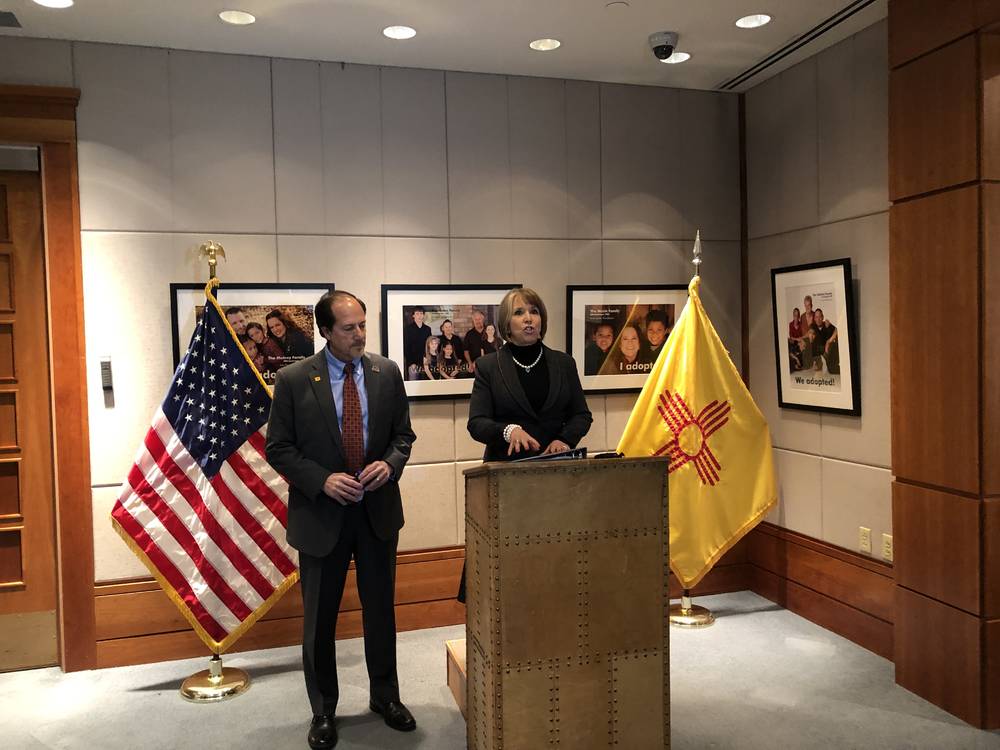 At the Capitol on Tuesday, Feb. 19, 2019, Gov. Michelle Lujan Grisham announced the appointment of John D'Antonio as state engineer.

Gov. Michelle Lujan Grisham tapped John D’Antonio on Tuesday to serve as state engineer, appointing a water policy veteran to manage what is one of the most valuable and fought-over resources in New Mexico.

D’Antonio was state engineer from 2003-11 and most recently worked with the U.S. Army Corps of Engineers. He takes over his old post amid a high-stakes court case over the Rio Grande and as New Mexico faces the effects of climate change.

“Our most precious resource has to be protected and managed in altogether new ways,” Lujan Grisham told reporters in announcing her pick.

It is a big job, particularly for a governor who has already sought to make climate change a priority during her first months in office.

The state engineer has authority over all water supplies in New Mexico. That includes flows in the state’s vast acequia systems and aquifers as well as rivers such as the Gila and the Rio Grande. The state engineer also manages water compacts with other jurisdictions and sits on the Interstate Stream Commission.

But the Office of the State Engineer has seen staffing shortages in recent years and has frustrated plenty with what many have argued is a lack of transparency as well as a lack of direction.

The number of empty desks has led to what the Legislative Finance Committee recently found to be a logjam of water rights applications.

Three members of the Interstate Stream Commission resigned in 2017, for example, citing “great concern for lack of direction from the State Engineer and adherence to New Mexico State Statutes.”

And the Society of Professional Journalists awarded the office a “Black Hole Award” that same year for violations of the Open Meetings Act and failing to release public documents.

D’Antonio said he wants to staff up the office and be more transparent.

Also key, he said, will be developing plans the state can act upon.

Lujan Grisham said she wants a 50-year plan for the state’s water resources that accounts for a changing climate.

Looming over the State Engineer’s Office is a lawsuit by Texas, which says it is not getting as much water from the Rio Grande as it is due.

Texas is asking that New Mexico stop pumping groundwater in some areas so more of the Rio Grande could flow south to farmers and residents in El Paso, the Associated Press reported.

New Mexico has countered that Texas is violating an agreement governing the Rio Grande by allowing unrestricted groundwater pumping and other diversions on its side of the state line.

D’Antonio said Tuesday he believes New Mexico has some strong claims. But he suggested the parties in the case should work toward a settlement.

“I don’t know that we want to go full bore and let the state’s future water for the Rio Grande be determined by a [court-appointed] special master,” D’Antonio said.

He said the state engineer should work “shoulder to shoulder” with the attorney general, who is representing New Mexico in the case.

Meanwhile, the state faces an ongoing debate over how best to conserve water and whether it can find new sources. D’Antonio pointed to Albuquerque’s strides in conserving water. Still, he added: “It only goes so far. We’ve got to look at new sources of water.”

“We’ve got a great opportunity with oil and gas in the southeast part of the state to use that produced water in an effective way,” he said, referring to water that comes from the process of producing oil.

D’Antonio has worked under both Republican and Democratic administrations, and the word lawmakers used most to describe him Tuesday was “respected.”

A secretary of the Environment Department under Gov. Gary Johnson, he went on to serve as state engineer under Gov. Bill Richardson and for the first 10 months of the Susana Martinez administration. D’Antonio has also worked in the Office of the State Engineer and at the U.S. Army Corps of Engineers. Most recently, he represented 12 federal agencies in day-to-day work with the Western States Water Council and oversaw two development projects within the corps.

“He’s gonna get things done all right,” Lujan Grisham said. “He’s going to be transparent because transparency is all but lost out of that department and the Interstate Stream Commission. And … we’re going to engage stakeholders so people feel like they are part of addressing our most precious resource.”