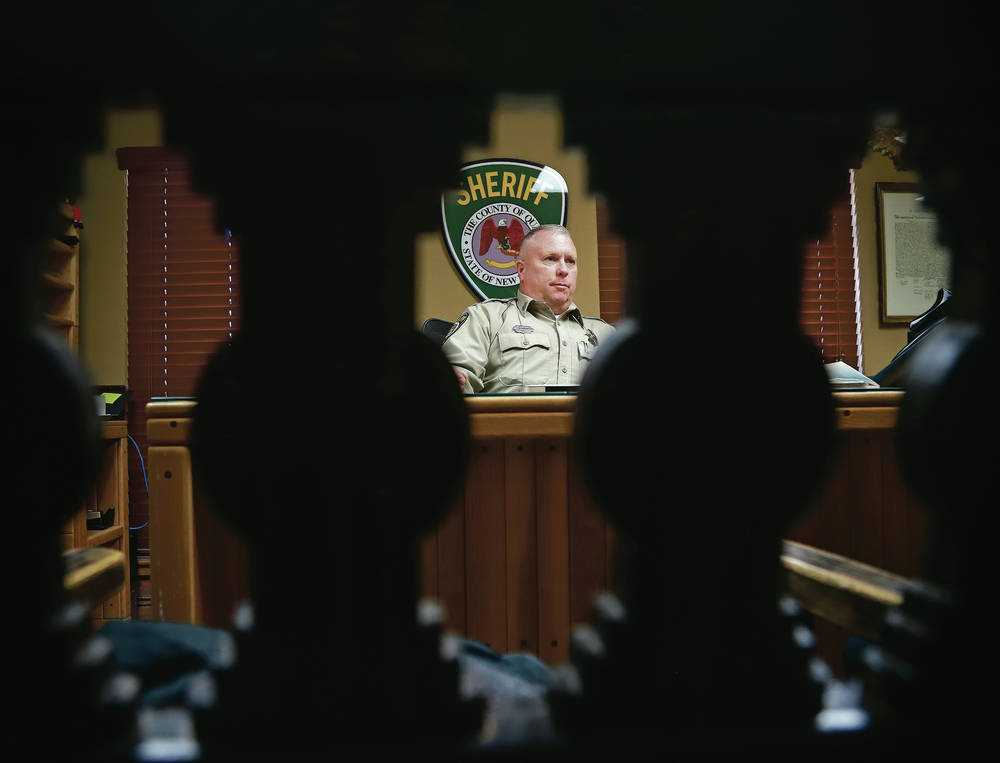 Quay County Sheriff Russell Shaffer speaks Wednesday in his office about the county's "Second Amendment sanctary" status, a stand in opposition to proposed gun control bills making their way through the Legislature.

TUCUMCARI — Back when this Eastern New Mexico town was founded as a tent city in 1901, it was unofficially known as “Ragtown.” Another nickname — “Six Shooter Siding” — later emerged, reportedly because of the large number of gunfights that took place there.

“Six Shooter Siding” would be used by a saloon on Old Route 66. Today, like many old commercial establishments in Tucumcari, Six Shooter Siding is boarded up. And it’s been at least a century or so since the town was renowned for gun violence.

Still, firearms and the right to bear them are important to people in the community.

With that as the backdrop, it wasn’t very surprising earlier this month when the Quay County Commission voted unanimously for a resolution, requested by Shafer, affirming the right of the sheriff “to not enforce any unconstitutional firearms law against any citizen.”

The nonbinding resolution — spurred by controversial gun-control legislation making its way through the Legislature — says the commission “will not authorize or appropriate government funds, resources, employees, agencies, contractors, buildings, detention centers or offices for the purposes of enforcing law that unconstitutionally infringes on the right of the people to keep and bear arms.”

The “Second Amendment sanctuary county” concept, fanned by some sheriffs and spreading to New Mexico county commissions like prairie fire, was borrowed from activists who for several years have convinced some local governments to declare themselves “sanctuary cities” for undocumented immigrants — meaning local law enforcement won’t help federal officers arrest those whose only crime is being in the country illegally.

Quay County was joined, in just a matter of days, by other rural counties across the state — including Curry, Lincoln, Union, Socorro, San Juan, Eddy, Valencia, Catron, Chaves, Grant, Hidalgo and Sandoval. All have passed identical or similar resolutions. The Taos County Commission on Tuesday postponed a decision on a resolution proposed by Sheriff Jerry Hogrefe. Torrance County has scheduled a special meeting Monday to discuss the matter, and even small municipalities, including Estancia and Bosque Farms, have adopted similar measures.

One sheriff who won’t be joining in is Santa Fe County Sheriff Adan Mendoza, who said through a spokesman that he supports the background check bills. ‘He does not see this legislation as infringing on Second Amendment rights,” spokesman Juan Ríos said. “He is a strong supporter of the Second Amendment. He views the legislation as a furtherance to improving public safety in our community.”

But in Tucumcari, the seat of a county of just a little more than 8,000 people, the move has proven popular far beyond a commission boardroom.

“Thank God for this resolution,” said Bob Kettler, while having an early dinner at Del’s Restaurant. “I’m pro-gun and pro-Second Amendment.”

A retired state employee and onetime newspaper editor, Kettler said he’s a member of the National Rifle Association and Gun Owners of America. “In this part of the country, everybody has a gun,” he noted, adding he believes “every dictator in history” began confiscating guns from citizens after seizing power.

“Criminals are not going to follow these rules,” Jennifer Goen said. Both noted their four children, ages 9 to 14, are involved in shooting sports, and they fear new gun laws could be harmful to organizations like the 4-H Club that sponsor such activities. Gun-control advocates argue none of the bills would criminalize such activities.

Support for Quay County’s resolution isn’t universal; a county resident who would identify himself only as “Rick” said the issue would create problems.

“This is a federal issue, not a county issue,” he said, adding, “The sheriff’s not going to be enforcing this law, anyway. I don’t know why the county commission would want to do this. All it does is stir up controversy and get people mad at each other.”

State Attorney General Hector Balderas didn’t condemn sanctuary counties for passing the resolutions, but through a spokesman, he said, “Local officials must ensure the health and safety of their residents and should appropriately comply with state and federal law.”

In his office in Tucumcari, Shafer said the resolution presented to his county commission and others was hammered out in email discussions between him and other county sheriffs across New Mexico who oppose various gun bills that are being discussed in the current session of the Legislature.

He said 29 out of the state’s 33 sheriffs are in agreement with the resolution — and opposed to the proposed gun legislation, which stands a good chance of passing the Democrat-dominated Legislature and being signed into law by Gov. Michelle Lujan Grisham.

The bills causing the most concern for Shafer are House Bill 8 and Senate Bill 8, which each call for background checks for nearly everyone buying a firearm in the state. While those holding federal firearm licenses — including people who own gun stores — by law must conduct background checks for every gun they sell, there currently are no such requirements for sales between private individuals. This, bill advocates say, allows criminals and people with mental problems to buy guns without a background check.

The Senate has passed SB 8 and the House has passed HB 8. To become law, at least one of the bills must pass both chambers and be signed by the governor.

Shafer also said he had qualms about HB 87, which would require those who are subjects of a domestic violence restraining order to relinquish their firearms to local law enforcement — and would require officers to confiscate guns they find from an accused domestic abuser when responding to a domestic violence call. The bill already has passed the House and is going through the Senate committee process.

Shafer, who was born and raised in Quay County, said the proposed gun-control measures are bad for his far-flung community.

“When you leave Tucumcari, you leave civilization,” he said. “Depending on the cellphone service that you have, you leave town, in 10 miles you lose service.” Guns, he added, protect ranchers and farmers from “not just two-legged attackers, but out here we have cougars, other wildlife …”

In his second term as Quay County’s sheriff, Shaver acknowledged violent crime isn’t a major problem. It’s a peaceful place, he said, “but you do not leave your doors unlocked.”

He said the most common crimes his deputies deal with are “crimes of opportunity.” Drugs, primarily methamphetamine, also are a big problem, he added.

Shafer emphasized he’s not opposed to confiscating guns from those who have been through the legal process and convicted of certain crimes.

“We have taken guns away from people who should not have gun. … Once they have been represented in a court of law and have representation by an attorney, I’ve got no problem with that.”

But the sheriff said it would be hard to enforce the background-check bill. And this, he said, leads him to believe that such a law would be a step toward a future law — confiscating guns from all citizens. It’s a notion gun-control advocates strongly dispute.

“By no means do I want to see anybody harmed by firearms,” Shafer said. “You victimize someone with a firearm, we’re going to go after you. … But even the accused are innocent until proven guilty, and we want them to go through due process. I do believe an individual should be able to buy and sell property the way he sees fit.”