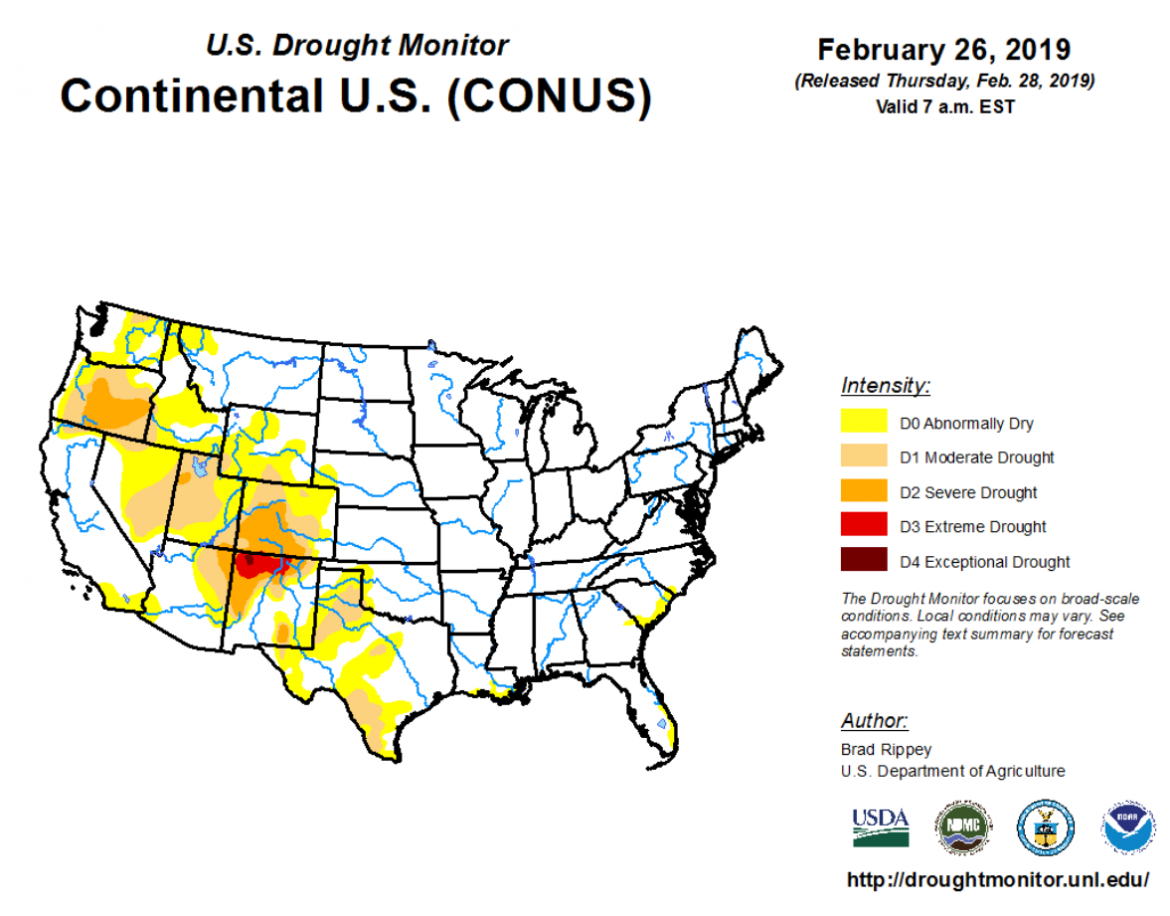 Snowpack in the Upper Rio Grande Basin is looking good, at 112 percent of normal.

There’s a  caveat, however, said Royce Fontenot, senior service hydrologist at the National Weather Service in Albuquerque, at the monthly drought monitoring working group meeting. “Snowpack has a tendency to disappear in these parts, and with wind gusts, it can go away before it starts to melt,” he said. Not only that, but soil moisture is so low from last year’s poor conditions that streams and rivers will have a higher-than-normal loss to recharge before runoff occurs.

As the latest update to the drought monitor shows, conditions have improved in New Mexico, but the Four Corners is still in rough shape, and there are some expanding drought conditions in southeastern New Mexico.

Reservoirs remain low throughout much of the state, and the U.S. Bureau of Reclamation’s Raymond Abeyta pointed out on the monthly drought call, it will take a few good winters, back-to-back, to get the reservoirs up, especially El Vado on the Chama River and Elephant Butte Reservoir on the Rio Grande.

Here are reservoir levels from the U.S. Bureau of Reclamation:

• Speaking of water, there’s a new study out in Nature Communications about the relationship between rivers, groundwater resources and human settlements in the United States between 1790 and 2010. It’s a really neat study and as the authors point out: “Our results reveal a historical coevolution of human-water systems, which could inform water management and contribute to societal adaptation to future climate change.”

• Monday, we’ll have an interview with new (and returning) State Engineer John D’Antonio. And this week we took a quick look the Centers for Disease Control and Prevention (CDC) and the Agency for Toxic Substances and Disease Registry (ATSDR) multi-site health study, looking at how per and polyfluoroalkyl substances (PFAS) affects human health. For the first phase of the study, researchers will test eight communities near military bases. None of the test sites are in New Mexico, despite PFAS contamination at Cannon and Holloman Air Force bases.

Don’t forget to subscribe to the weekly email, so you can read all the news on Thursday morning. Just click here.