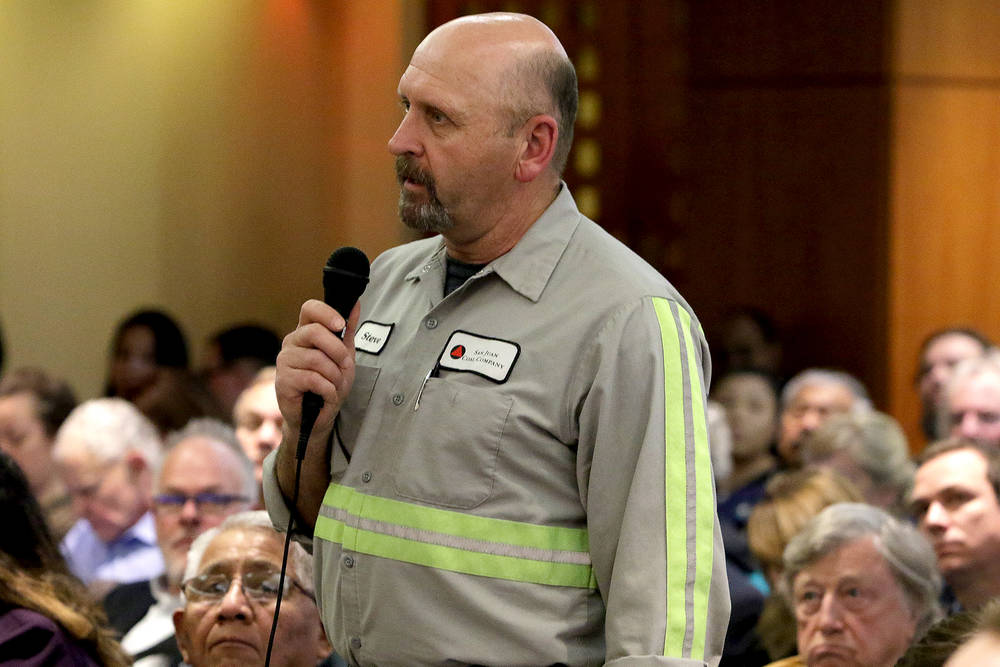 Steve Kennedy, a coal miner for the past 29 years at the San Juan Mine, speaks during a hearing Saturday on a bill that calls for a sweeping transition to renewable energy and includes measures to aid in the closure of the San Juan Generating Station and adjacent coal mine.

A New York hedge fund negotiating with the city of Farmington to take over the coal-burning San Juan Generating Station is proposing to refit the aging power plant with technology city officials say would reduce carbon emissions by 90 percent and help pay for itself by shipping captured carbon to oil fields through a pipeline.

But the “carbon capture and sequestration” technology being touted by Farmington and Acme Equities LLC is controversial and has never before been used in an operation as large as the San Juan plant.

State legislators sponsoring a bill designed to shut down the San Juan plant by 2022 discussed the bill and the Farmington negotiations before the Senate Corporations and Transportation Committee on Saturday, expressing doubts about the technology and whether the proposal would be economically feasible.

The committee discussed Senate Bill 489 — the Energy Transition Act — and took public testimony for more than three hours Saturday. However, the committee took no action on the bill. Chairman Clemente Sanchez, D-Grants, said the committee would vote on the legislation when it meets again Monday.

The committee also will vote on several proposed amendments to the bill, including one by Sen. Bill Sharer, R-Farmington, that would allow the San Juan Generating Station to operate as a coal-fired facility until 2030 — without having to adhere to the clean-air standards included in the current version of SB 489.

The power plant and adjacent coal mine constitute a major source of employment in northwestern New Mexico.

Among those showing up for Saturday’s hearing were more than 40 coal miners who work at the San Juan Mine. Several spoke, asking senators to adopt Sharer’s amendment.

Farmington officials said they could support the bill if the amendment is adopted.

But Sen. Jacob Candelaria, D-Albuquerque, the prime sponsor of the legislation, countered that the amendment basically would gut the bill.

SB 489 also is intended to soften the financial hit to Public Service Company of New Mexico, the state’s largest electric utility and majority owner of the San Juan Generating Station. Under the measure, PNM would be allowed to issue securitized bonds to pay off old debts for the San Juan plant. This would be done with new securitized bonds, which have significantly lower interest rates. Candelaria said the securitized bonds have rates as low as 2 percent or 3 percent.

The bill would set up a $20 million economic redevelopment fund to help Farmington and surrounding towns aid displaced workers, and would mandate that any replacement energy sources be located in the Central Consolidated School District in the Farmington area — which, Candelaria said, would mitigate the loss of property tax revenue to schools.

The latest version of the bill also includes $2 million for the state Department of Indian Affairs to study how the transition to renewable energy would affect Native Americans. A large portion of miners digging coal for the plant are members of the Navajo Nation.

“We can choose not to [pass this bill] with the hope that the global price of coal will rebound, but I can tell you it’s not going to happen,” Candelaria said.

Sharer argued that the San Juan Mine — owned and operated by Englewood, Colo.-based Westmoreland Coal Co., which has filed for bankruptcy — is not subject to fluctuations in the global coal market because it has a long-term contract with a set price for its coal sold to the power plant.

Steve Pierro, president and general manager of the mine, told the committee Westmoreland had its Chapter 11 bankruptcy protection plan approved by a federal court last week, and that he was optimistic about the company rebounding.

Among those casting doubt on the proposed carbon capture technology was Rep. Nathan Small, D-Las Cruces, a co-sponsor of SB 489.

There are only two plants in the world using the carbon capture technology, according to the U.S. Energy Information Agency. One is the Petra Nova plant near Houston — the only such power plant in the U.S. The other is the Boundary Dam plant in Saskatchewan, Canada, near the border with North Dakota.

Another power plant in Mississippi was built with the capability of using that technology as well as natural gas. According to the Energy Information Agency, the Mississippi plant had been expected to be fully operational and capable of using carbon capture by mid-2014. However, in June 2017, Mississippi Power “decided to suspend operations activities relating to the coal gasification process, electing to operate Kemper [power plant] strictly as a natural gas-fired combined-cycle plant.”

PNM has said it wants to close the San Juan plant by 2022.

But PNM lobbyist Sayuri Yamada later told the committee that the utility, which is supporting the bill, was looking at the amendment and hadn’t taken a position on it.

There was virtually no discussion about who is behind Acme Equities.

A story on the Energy & Policy Institute website last week called Acme “a mysterious hedge fund with no experience in the power sector.”

The article, by the institute Executive Director David Pomerantz, said, “Acme Equities appears to have incorporated with the Delaware Division of Corporations on April 3, 2013. Jason Selch lists himself as Acme’s ‘co-founder’ on a LinkedIn page, saying he has worked there since 2012.”

While Selch does have a background in energy investments, Pomerantz wrote, “None of the work that Selch did as an oil and gas investor earned him the notoriety that he gained from a 2005 incident, when he was fired from his job at Wanger Asset Management after 11 years of employment.

“After new management from Bank of America, which had bought the firm, fired Selch’s colleague,” Pomerantz continued, “Selch dropped his pants and ‘mooned’ two of his new employers in protest. Bank of America fired Selch, who sued, appealed, and finally lost for good in 2012, leading to a round of tabloid headlines over the incident.”

The Energy & Policy Institute describes itself as “a watchdog organization working to expose attacks on renewable energy and counter misinformation by fossil fuel and utility interests.”