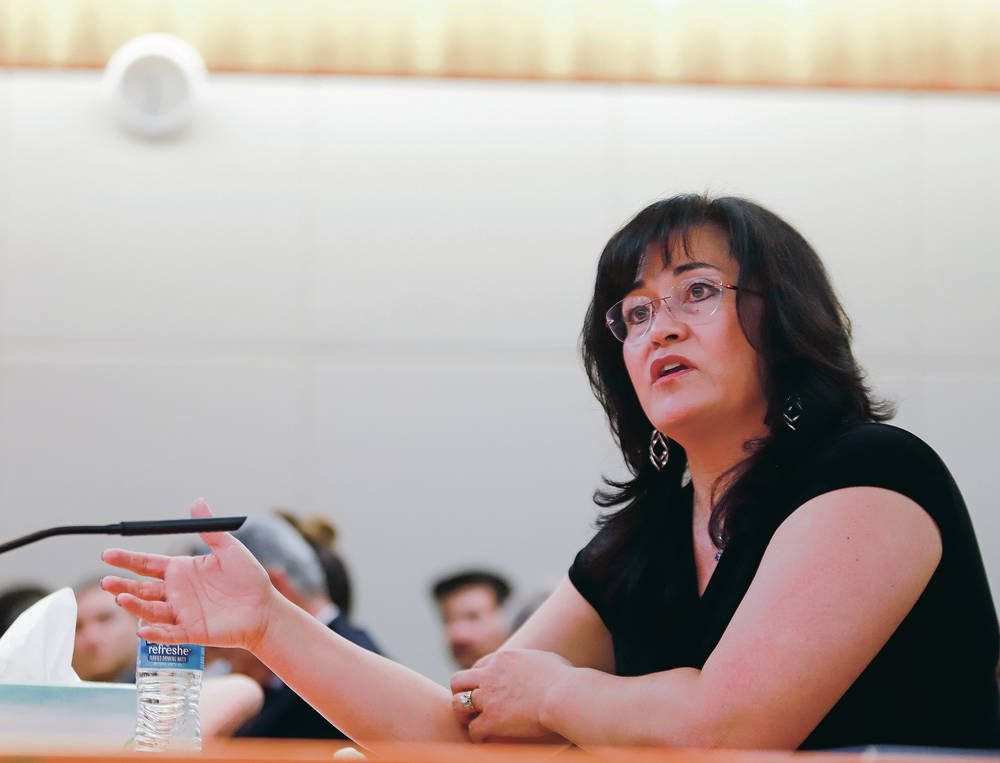 Karen Trujillo answers questions from the Senate Rules Committee during a two-hour hearing which preceded a Senate vote of 38-0 to confirm Trujillo as New Mexico's new public education secretary on Monday, March 4, 2019.

It lacked the drama, conflict and fire that marked hearings involving the controversial Hanna Skandera, who toiled through four years of political battles, committee hearings and public testimony over her confirmation, which Skandera at one point called “a circus.”

In the end, the Senate voted 22-19 to confirm Skandera in 2015 — four years after she was appointed to the job by then-Gov. Susana Martinez. The Senate never confirmed Skandera’s successor, Christopher Ruszkowski, who took the job in the spring of 2017 on an interim basis after Skandera’s resignation and was named secretary-designate by Martinez later that year.

For Trujillo, the entire process took little more than two hours and ended with a Senate vote of 38-0.

Trujillo most recently served as interim associate dean for research at New Mexico State University’s College of Education. Her salary is $128,000 a year.

Monday’s vote followed a two-hour Senate Rules Committee hearing in which committee members asked Trujillo a number of questions about how she would improve the state’s public education system, generally viewed as one of the worst in the country, based on national statistics.

Trujillo repeatedly focused on the need for various state agencies as well as educators, teachers, students and community members to come together to fix the system.

Her appointment comes at a time when state lawmakers are working to meet an April 15 deadline to satisfy a ruling by First Judicial District Court Judge Sarah Singleton, who ordered the state to meet its constitutional mandate by providing adequate resources for several groups of students — including English language learners and those with special needs, plus low-income and Native American children.

Legal representatives for the plaintiffs in that case have continually said that neither Gov. Michelle Lujan Grisham nor state legislators are doing enough in shaping this year’s budget to satisfy that court mandate.

Trujillo said she disagrees. “I’m very confident the judge will recognize the efforts we are taking in both the executive and legislative branches to address this,” she said.

One piece of legislation introduced this year calls for a temporary moratorium on new charter schools, while other bills include proposals to phase out the small school size adjustment formula, which benefits traditional public schools and charter schools that have a small enrollment.

Charter school advocates say these measures will hurt their ability to grow and provide choice for parents and students, but Trujillo said she sees a moratorium as a “viable option” to give the state time to see what is and is not working with the state’s 97 charter schools.

She also told committee members that she does not support legislative efforts to cut off funding for students who are over the age of 21 and still enrolled in public school programming.

“It would be irresponsible to stop these supports,” she said.

She spoke in broad terms of supporting a “community schools” model in which schools provide wrap-around services, such as health care, clothing and social workers, and working with the Higher Education Department and other state agencies to reduce the large number of high school graduates who need remedial classes in college.

She reiterated an earlier pledge to find a new standards-based exam for students but said the state will maintain its current Common Core Standards.