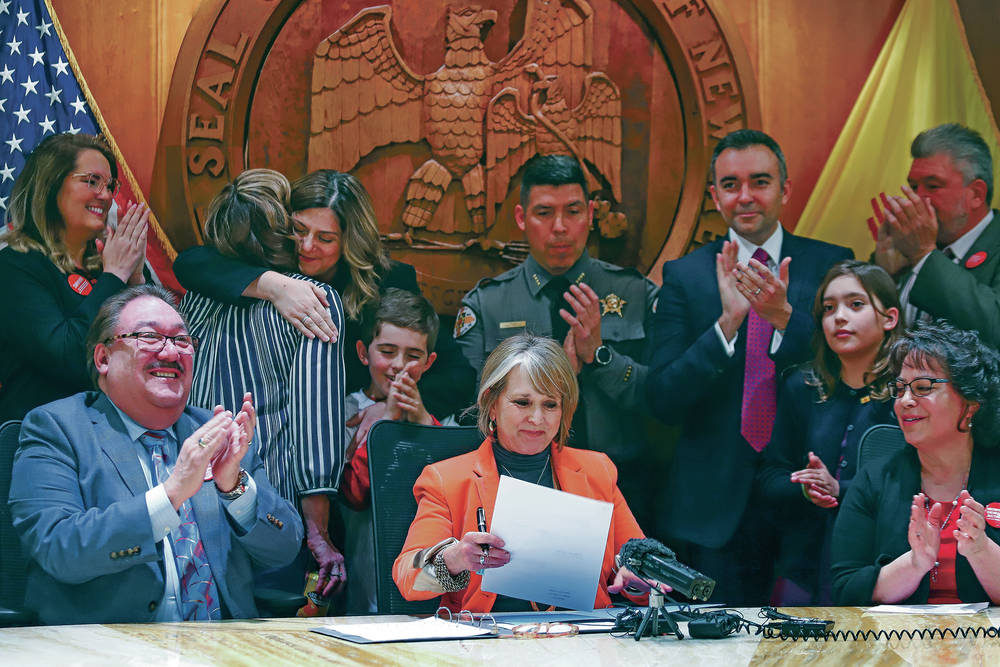 The bill has been a priority for gun control advocates, who argue the measure merely closes a loophole in state law and will help keep weapons out of the hands of people barred from owning firearms.

But gun rights groups have argued the law will do little to prevent crime. Instead, critics contend it infringes on Second Amendment rights. Republicans have announced they will circulate petitions to put a proposal for repealing the law to a statewide vote.

“It’s clear to me that the NRA isn’t going to stop trying to meddle in making this a safer state,” she told reporters, referring to the National Rifle Association, which opposes the bill.

While those holding federal firearm licenses — including people who own gun stores — by law must conduct background checks whenever they sell a gun, there currently are no such requirements for sales between private individuals.

Senate Bill 8, which will take effect in July makes it a misdemeanor to sell a firearm to just about anyone without a background check.

A background check would not be required for sales between law enforcement officers or immediate family members, such as from an uncle to a niece or between first cousins.

And the law would not apply to antique firearms or to devices like emergency flares and construction tools.

But neighbors or people who meet online would have to arrange a background check through a federal firearms license holder.

Twenty states and the District of Columbia have extended the background check requirement beyond federal law to cover at least some private sales, according to the Giffords Law Center to Prevent Gun Violence, which supports such legislation.

Research on the effectiveness of such laws has produced varied results.

Meanwhile, officials in 25 of New Mexico’s 33 counties have adopted “Second Amendment Sanctuary” declarations as of Wednesday, effectively refusing to enforce the new law.

House Republicans are launching an effort to get the issue on a statewide ballot and give voters a choice to repeal it. The idea is based on a provision of the state Constitution. Even if it is possible, critics of the bill would need tens of thousands of signatures to make it happen.

Several other gun control bills are wending through the Legislature.

The Senate passed SB 328 on Wednesday, for example, which would take guns from domestic abusers and stalkers.

For Taos Mayor Dan Barrone, bills like these are personal.

“I have three kids and they almost grew up without a mom because of gun violence,” he said after the governor signed SB 8, describing an on-the-job shooting that could have killed his wife.

Barrone emphasized that he’s a hunter and also has a concealed carry permit.

But, he said: “Can we get guns out of the wrong hands?”