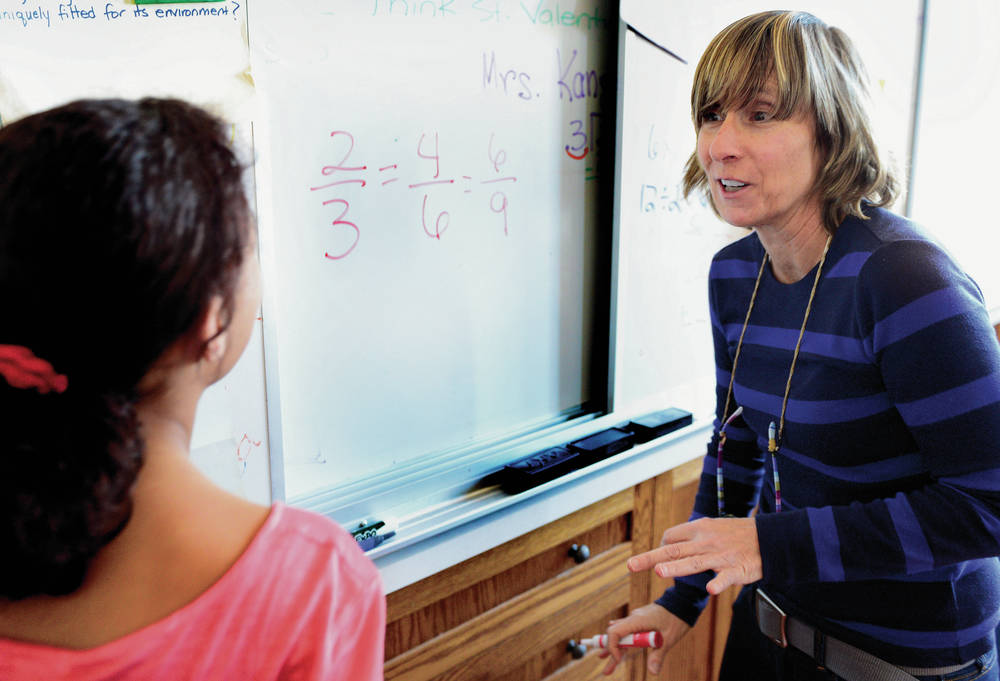 Jennifer St. Clair, a teacher at Carlos Gilbert Elementary School, says she will apply for a merit stipend through the school district's performance-pay pilot program. But she says teachers are reluctant to participate in the program, which bases a teacher's extra pay on student test scores.

Two bills that would have created new guidelines for grading New Mexico’s teachers stalled during the just-completed legislative session, but the state Public Education Department will continue to transition away from the evaluation system implemented by the administration of former Gov. Susana Martinez.

Troubled by a teacher shortage, department officials say they are aiming to finalize a new rule outlining teacher evaluation standards that could become law in the 2020 session of the state Legislature.

“We are trying to rebuild some trust between the department and educators. Across the board we are looking to change how we give schools or teachers feedback,” PED Deputy Secretary for Teaching and Learning Gwen Warniment said. “The old system did not offer teachers any type of mechanism through which you were able to become a reflective practitioner. It simply labeled teachers. Evaluations are about understanding feedback in order to get better.”

On her third day in office, Gov. Michelle Lujan Grisham signed executive orders that began New Mexico’s transition away from the old systems of standardized testing and teacher evaluation, which many New Mexico teachers criticized as punitive and unfair for what they said was an over-reliance on test scores and teacher attendance.

Many teachers complained that while their contracts allowed them a certain number of sick days, going over a limit set by PED could cost them in their evaluation scores.

“I personally left my own child home sick with a fever once because I had to go to school,” Carlos Gilbert Elementary School special education teacher Jennifer St. Clair said. “Last time I checked, teachers are human beings with families, but if you get sick or break your foot, there is no way you can get an exemplary evaluation. It’s an extremely demoralizing system.”

On Feb. 4, Grisham signed into law House Bill 227, which says that a teacher’s use of personal leave and up to 10 days of sick leave shall not affect that teacher’s annual performance evaluation. But Senate Bill 247 and House Bill 212, which would have redefined the makeup of a teacher’s evaluation by removing the emphasis on test scores, never made it to the governor’s desk.

Both the Senate and House bills would have made instructional quality — largely judged by a classroom observation by a principal or other qualified administrator — count for at least 50 percent of a performance rating while also factoring in student feedback, student learning growth and professional development. Observation does factor into the outgoing teacher evaluation model, but teachers say that its method for evaluating a teacher on a single classroom lesson is not helpful.

“In these observations there are all these boxes that have to be checked off within that one classroom session. It’s not a realistic view. What I end up doing is putting on a show,” Pojoaque High School Spanish teacher Chris Bernstein said. “I want a good evaluation so I’m going to include all the things in one lesson that check the right boxes. That’s not good teaching.”

The department says it is further along in replacing PARCC standardized tests than it is creating a new teacher evaluation system. Both processes, Warniment said, involve creating a task force to travel the state and speak with stakeholders first- hand about potential best practices.

This fall, teachers will receive evaluations on their 2018-19 school year performance based on Martinez’s evaluation system. Warniment says she expects a bill to be introduced in 2020 that will resemble key elements in the Senate and House bills that failed to reach Lujan Grisham’s desk. She also said that whether it is being enforced as a department rule or under statute, the first evaluations under the new system will take place during the 2019-20 school year and be released to teachers in fall 2020.

In the meantime, many teachers said they are happy to move into a new evaluation system.

“We do have PTSD from the whole tone of the previous administration. Their whole tone was we want to catch you messing up. It wasn’t we want to help your students succeed,” St. Clair said. “A new evaluation system will represent a positive change. Teachers are feeling better under the current administration, but we’re still skeptical.”

Correction: When putting this story in our system, NM Political Report misspelled the name of the author as “Dylan Mullan” instead of “Dillon Mullan.”