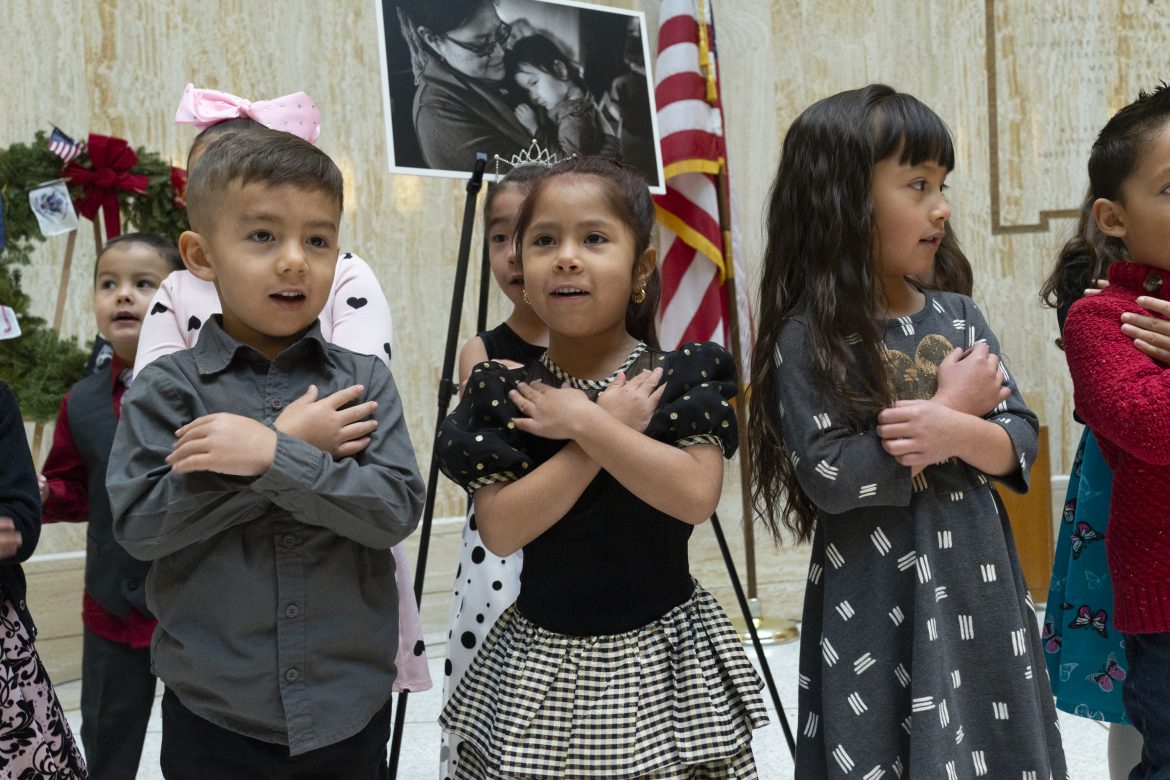 It’s a Wednesday morning at Kids Campus at Santa Fe Community College, and Sacha, an 11-month-old girl, has just taken a few wobbly steps. Staff members hold their breath, and one person exclaims, “Look at her!”

“Many of our kids start in the baby room and work their way through [the pre-K program]” and eventually all the way to college, said Michelle Rosen-Hatcher, a director at Kids Campus, one of a handful of infant care centers in Santa Fe. “We love that we can provide that continuity of care for our kids.”

Unfortunately, New Mexico children haven’t received the same support from state lawmakers, who have effectively marched backwards in recent years. A 2019 report by the Santa Fe Baby Fund shows that there is only enough high-quality center-based care for 7 percent of babies born in Santa Fe. The shortage reflects one of New Mexico’s most entrenched problems. According to the Annie E. Casey Foundation, the state ranks dead last in the country in overall child well-being.

Faced with this crisis, Gov. Michelle Lujan Grisham has made child well-being a priority. And during the 54th New Mexico Legislature, which wrapped on March 16 at the Roundhouse in Santa Fe, some lawmakers followed suit — albeit with baby steps.

Other state legislators, such as Senate Finance Committee chair John Arthur Smith and other Democrats in that chamber, defaulted to politics as usual by refusing to appropriate a robust and likely long-term income stream for New Mexico children.

The signature child well-being bill of the 60-day assembly is the Early Childhood Education and Care Department Act (Senate Bill 22), which creates a standalone cabinet-level department for early childhood education in an attempt to boost early pre-K and pre-K program eligibility for New Mexico families. According to data from the National Institute for Early Education Research at Rutgers University, 81 percent of 3-year-olds and 50 percent of 4-year-olds in New Mexico are not attending pre-K programs.

All pre-K programs under the Public Education Department and the Children, Youth & Families Department, as well as certain Human Services Department and Department of Health programs, will move to the centralized ECECD, which will also focus on early-childhood special education, home visitation, Head Start and family support for children 5 and under.

The establishment of the ECECD, which benefits from a $1.25 million appropriation, is a far cry from the competing bill that Sen. Bill Soules (D-Las Cruces) eventually withdrew during the session. SB 298, the Public Pre-Kindergarten Act, sent many of the state’s private care centers into a tizzy, because it would have moved all pre-K 4-year olds out of CYFD’s supervision and into a universal pre-K system headed by PED.

A system to streamline data sharing dies in committee

Following unanimous approval in the House, a Child and Family Databank bill appeared to be moving full steam ahead to the governor’s desk. The act went belly up in the Senate Judiciary Committee.

The Databank, lauded by early childhood development advocates as a potential turning point in revamping child welfare, would have created an integrated data system to track the welfare of New Mexico’s kids. According to Jennifer Ramo, executive director of the Santa Fe-based nonprofit New Mexico Appleseed, lawmakers and social services professionals could have used the system to craft targeted policies for the state’s most underserved and vulnerable populations.

While studying factors that contribute to family poverty, Ramo noted overlapping circles in what she described as a Venn diagram of health problems, substance abuse, housing instability, poor educational outcomes and involvement with the criminal justice system.

“When you pull the Venn diagram apart, what you realize is that those are all the different agencies that are dealing with treating these symptoms and none of them communicate,” said Ramo, whose organization focuses on combating poverty in the state and proposed the initiative.

The Databank could also have addressed “multi-system families” — families in two or more social-service systems — in order to avoid duplication of services. Ramo estimated that 16,000 families are contributing to New Mexico’s social services dollars “and not seeing any positive outcome.”

A bill sponsored by Sen. Bill Tallman, D-Albuquerque, that addressed drug overdoses for children in foster care at the hands of “high-risk prescribers” didn’t make it out of committee. Critics say that an act expanding eligibility for families seeking child care assistance never had a chance due to its $40 million price tag. And a bill introduced by Rep. Rebecca Dow (R-Truth or Consequences) that sought a shared-services model in an effort to limit the duplication of early childhood education programs perished in the House Appropriations and Finance Committee.

“With high-quality child care centers only able to accommodate approximately 7 percent of babies born in Santa Fe, families face waiting lists 50 names deep,” said Dry, who added that her organization’s findings echo statewide trends. “Some are still providing care under the radar. That shouldn’t happen. They should be supported enough to make it worthwhile, to be part of the regulated system where the benefits outweigh the costs of participation.”

The Senate Rules Committee, by a 7-4 vote, eradicated a constitutional amendment that would have earmarked a bigger cut from the $17.7 billion Land Grant Permanent Fund for early childhood programs.

Sen. Tallman joined fellow senate Democrats Clemente Sanchez of Grants and Mary Kay Papen of Las Cruces in refusing to permanently increase the withdrawal rate from 5 percent to 6 percent. A proposal to increase the rate would have contributed an additional $170 million to the 2022 budget year. This year, the permanent fund is distributing roughly $747 million for New Mexico’s public schools and other beneficiaries.

Similar proposals have been introduced in the Legislature since 2011, and each went down in flames.

Two days after the vote, Lujan Grisham, testifying before the Senate Education Committee with her 3-year-old granddaughter Avery in her lap, urged lawmakers to back SB 671. The bill, sponsored by Sen. Linda Lopez, D-Albuquerque, called for a smaller increase in the withdrawal rate (to 5.5 percent instead of 6 percent) from the permanent fund, which is subsidized by revenue generated from the state’s oil and gas leases and royalties.

As Lujan Grisham testified, Avery quietly doodled and lawmakers bickered about the governor’s motivations. A bill like SB 671, they said, couldn’t be pushed through without statewide voter approval of an amendment to the New Mexico Constitution.

In the end, the Senate didn’t budge an inch, coaxing fiery remarks from some lawmakers.

“If we’re going to do this, we have a means available to do it,” said Sen. Gerald Ortiz y Pino, D-Albuquerque, during closing statements. “Either [increase the withdrawal rate from the permanent fund] or cut our reserves, which will be $1.5 billion in operating reserves. We can find $150 million in there.