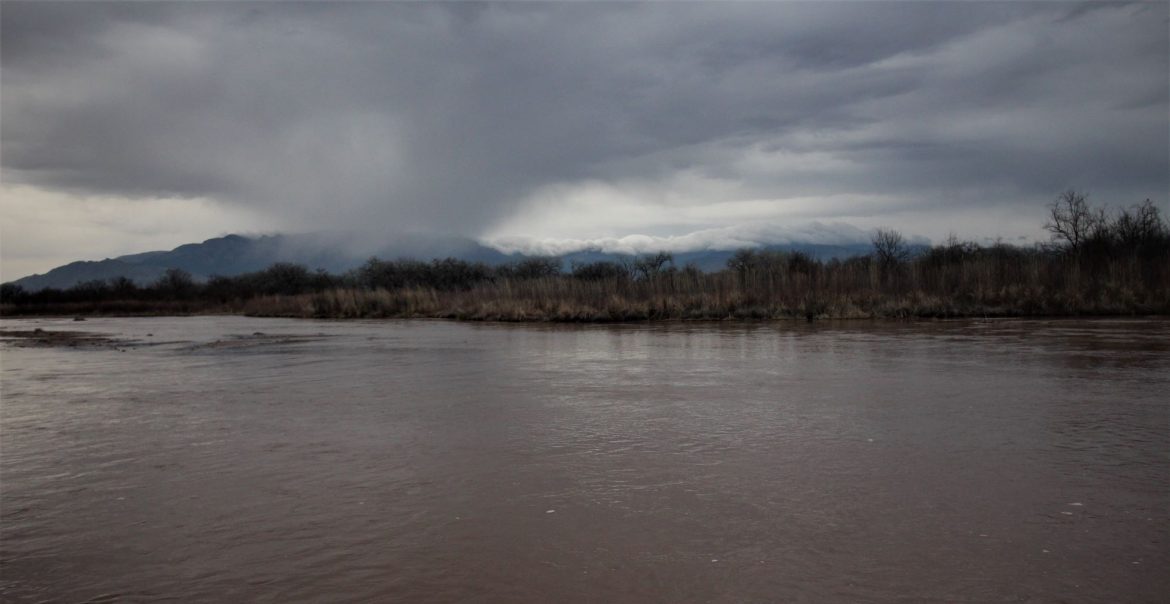 Recent storms packed the mountains of southern Colorado and northern New Mexico with healthy snow levels, and meteorologists anticipate El Niño conditions will persist through the spring. This is welcome news after last year’s dry conditions. But in the long term, forecasters and farmers still remain cautious. That’s because long-term drought has dried out the state’s soils. And reservoirs remain low, particularly on the Rio Grande and its tributary, the Chama River.

According to the most recent national drought monitor, the only extreme drought conditions in the entire nation are in San Juan County in northwestern New Mexico. Drought conditions are also building in west Texas and in New Mexico’s Lea and Eddy counties. And though El Niño conditions favor bringing precipitation to the Southwest, temperatures are expected to be above average over the next month, too.

During a call earlier this week about the outlook for the Rio Grande this year, Greg Waller, service coordination hydrologist with NOAA’s West Gulf River Forecast Center, emphasized the good snowpack news, especially after last year’s “brutal” conditions. But he also noted it’s critical to pay attention to what happens next.

Because the ground is so dry, initial snowmelt will first do the job of saturating top layers of the soil. Forecasters hope that rains don’t fall atop the snowpack, melting it off too early or causing flooding. Spring winds can also wreak havoc with snowpack—evaporating the moisture before it can melt into streams and rivers.

They hope that doesn’t happen. But, Waller said, “sometimes Mother Nature throws us a curveball.”

In 2018, there wasn’t any runoff to speak of on the Rio Grande, and both the river and reservoirs suffered.

“By this time last year, we were preparing to manage drying on the river,” said Mary Carlson with the U.S. Bureau of Reclamation. In 2018, the Rio Grande began drying in early April, when it should have been flush with snowmelt.

“By the end of the summer, most of our reservoirs were almost empty,” Carlson said. “So we are looking forward to what is shaping up to be a good runoff to help start the climb toward replenishing our reservoirs.”

Since last May, New Mexico has been under Article VII restrictions: According to the Rio Grande Compact of 1938, Colorado and New Mexico can’t store water in any of the upstream reservoirs built after 1929 when combined storage in Elephant Butte and Caballo reservoirs is below 400,000 acre feet. This includes Heron, El Vado and Heron reservoirs.

Carlson said Reclamation estimates Article VII restrictions will lift in mid-May, for about a month, until combined storage in the two reservoirs drops again below 400,000 acre feet.

While most of New Mexico’s streams and rivers are at or above their norm for the season—even the Santa Fe River is flowing right now—most of the state’s largest reservoirs still tell the story of 2018’s historically dry and warm conditions.

In the Middle Rio Grande Valley, irrigation canals and ditches are already flowing, mostly to flush debris that built up over the winter and to check for leaks.

“There has been some irrigation going on, but generally it has remained cool and damp, and we are not getting many requests for water yet,” said Middle Rio Grande Conservancy District hydrologist David Gensler. “Certainly not like last year, when it was so dry and people were desperate for water.”

Unless something “really unexpected” happens, he said, the district anticipates a “pretty comfortable year” for irrigation in the Middle Rio Grande.

Even if New Mexico comes out of Article VII restrictions, he said the district probably won’t store much water in 2019, and they aren’t even considering the possibility of filling El Vado. That’s not just due to conditions and restrictions, he said: repairs are planned for El Vado, and managers will also need water to help support endangered species in the river, such as the Rio Grande silvery minnow.

“At the moment, the climate forecasts also look good, with normal temps and normal to above normal precipitation for the summer,” Gensler said, adding that he’s feeling upbeat this year.

There is a downside to anticipating this year’s runoff, he said: they’ll be watching the levees closely. The timing of snowmelt will matter, but there could be situations similar to in 2017, when there was levee seepage and bank failures. Gensler also anticipates that the Chama River below Abiquiu Reservoir will run at the channel’s capacity, causing erosion and damage to acequia intakes there.

“[It’s] shaping up to be an interesting year on the Rio Grande,” he said. “But aren’t they all, in their own unique way?”

Elephant Butte Irrigation District (EBID) farmers will start receiving water from Caballo Reservoir at the end of May. Until then, they will have to pump groundwater if they need to irrigate.

Currently, the district anticipates delivering to farmers six to ten inches of water per acre. But EBID hasn’t decided on final allocations yet, because their storage levels are so low, explained Phillip King, a civil engineering professor at New Mexico State University and water adviser to EBID.

A normal allotment for EBID farmers is 36 inches per acre per year. Last year, EBID farmers received ten inches. And even in 2017, during which snowpack was robust, drought and storage conditions meant they received 24 inches.

“While the snowpack looks promising, we don’t allocate it until it reaches the reservoir,” he said. “It is a long way from the mountain slopes of Colorado to Elephant Butte Dam.”

King added they anticipate lingering drought effects both in the upstream watershed and below the reservoirs of the Rio Grande Project.

The region is also warmer than it was in the 1990s: Last year, the average U.S. annual temperature was 1.5°F above the 20th-century average, and it was the fourth warmest on record. New Mexico was even warmer, experiencing its third warmest year on record.

Meanwhile, over on the Pecos River, the Carlsbad Irrigation District had planned to start the irrigation season by now, but they’re holding off, probably for just a few more days.

“We don’t have a full allotment yet and we did get a pretty good rain event last week, and those two things combined mean people are being a little bit conservative right now,” said Dale Ballard, the district’s manager. “[Farmers] want to make sure to ration that water to make sure it goes as far into the season as they can.”

Unlike on the Rio Grande, farmers on the Pecos have received full allotments of water in recent years—that’s about 3.7 acre feet per year. Right now, the initial allotment for this spring is set at 2.5 acre feet. “We expect that will go up,” Ballard said. “We have not yet gotten any of the snowmelt or runoff from the Sangre de Cristos into Santa Rosa Lake, so we’re just waiting to see what that will be before we increase the allotment.”

Like most years, Ballard said, they’ll “pray for rain.”

And everyone will keep an eye toward the mountains.