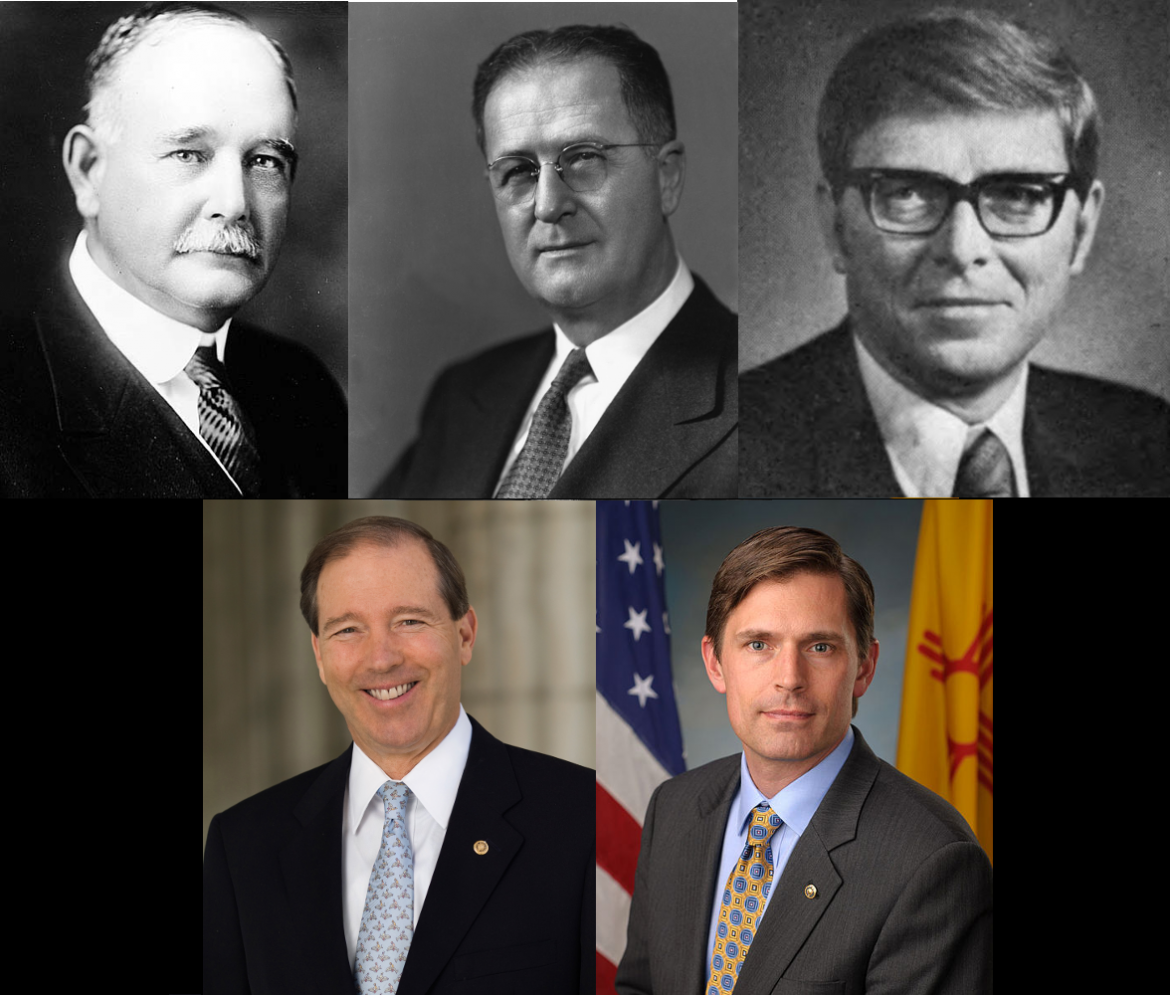 The attention quickly turned to who would be Udall’s replacement. So far, U.S. Rep. Ben Ray Lujan has said he will run, and Attorney General Hector Balderas said he won’t.

It’s easy for political reporters to get caught up in the races. But a look back in history can be instructive as well.

When starting to write about all this last week, I wondered how many open Senate seats there have been in state history. What I expected to be a short paragraph turned into something more interesting, as I fell down a rabbit hole of looking through history books and biographies.

What I almost included in the story about Udall’s decision was something along these lines:

An open seat, or one in which an incumbent is not running for re-election, is very rare in New Mexico. In the state’s 107 year history, there have only been five races for open seats out of 42 total Senate elections. And only three incumbents in state history have sought re-election and lost: Holm Bursum in 1924, Joseph Montoya in 1976 and Harrison Schmitt in 1982.

But that’s a boring way to write about a political history dating back to the state’s earliest days and most controversial and colorful figures all the way to our current, more straightlaced Senators.

There are a few reasons open races for New Mexico senators are so rare, including that Senate seats are up for election every six years as opposed to the two years for U.S. House seats, which means there are just fewer Senate elections in general. And, as those who remember long-time Senators Dennis Chavez or Pete Domenici know, New Mexico senators tend to hold onto their seats for decades before retiring.

Before Congress ratified the 17th Amendment to the U.S. Constitution in 1913, state legislators decided who would represent their state in the U.S. Senate. This made 1916 the first time the wider electorate in New Mexico, and not just legislators, would cast votes for their Senator.

During the Territorial Period and New Mexico’s early statehood, Albert B. Fall and Thomas Catron were among the most influential figures in New Mexico politics. Both were elected to the U.S. Senate in 1912. (I’ll tell you more about their stories down below).

Despite their shared Republican Party membership, the two were political enemies and Fall made sure Catron (for whom the sparsely populated, southwestern county is named) didn’t receive the Republican nomination at the party’s convention. That left an open seat. And the Democrats took advantage of the situation.

Democrat Andrieus A. Jones defeated Republican Frank Hubbell and Socialist W.P. Metcalf. Jones received over 51 percent of the vote in the three-way race.

Fall resigned from the U.S. Senate in 1921 when he was named Secretary of the Interior. Once there, he was at the center of the Teapot Dome scandal, in which oilmen Edward Doheny and Harry Sinclair paid bribes to Fall to develop oil leases, including at the Teapot Dome Oil Field in Wyoming. In 1929, federal prosecutors convicted Fall of conspiracy and bribery and he became the first U.S. cabinet official sentenced to prison. The next wouldn’t come until Attorney General John N. Mitchell for his role in the Watergate scandal.

Another 32 years would pass before the next election for an open U.S. Senate seat in New Mexico.

Democrat Carl Hatch (the southern New Mexico village synonymous with chile is not named after him; but he did sponsor what’s now known as the Hatch Act, which bars federal employees from engaging in electoral politics while on the job) served for 16 years after he was chosen to replace fellow Democrat Sam G. Bratton when Bratton resigned in 1933 to take a seat on the U.S. Court of Appeals. Hatch retired in 1948, leaving an open seat.

Clinton Anderson won that race, defeating Republican Patrick J. Hurley. It was the second of three losses in Senate races for Hurley, the other two to Dennis Chavez in 1946 and 1952.

Hurley was a former U.S. Secretary of War under President Herbert Hoover and briefly served as the U.S. Ambassador to China under President Franklin D. Roosevelt. In his obituary, the New York Times described Hurley as “a rugged individualist” and “a self-made millionaire oil man.” The history of New Mexico politicians who made their fortunes from oil began long ago and will likely continue into the future.

Anderson served until 1972, when he retired due to health problems.

The race to replace Anderson would be the final open seat race for decades—largely thanks to the man who replaced him.

Republican Pete Domenici served on the Albuquerque City Commission (the precursor to the modern day city council) for two terms, including a stint as Commission Chairman, the rough equivalent of mayor.

Domenici lost in the race for governor in 1970 to Democrat Bruce King, but then never lost another election in his life.

Domenici kept his vice grip on the seat for over three decades until retiring in 2009 when he announced he had a degenerative brain condition. Domenici is still the longest-serving U.S. Senator is state history, serving six full terms.

When Domenici retired, it set off a scramble to replace the legendary legislator.

And, when the dust settled, the candidates to replace Domenici included all three of the state’s U.S. Representatives (setting off similar scrambles in each of their districts, which created ripples that last in today’s political landscape in the state).

At the same time, Tom Udall had no opponent in the Democratic primary. Former Albuquerque Mayor Martin Chávez briefly entered the race, but bowed out in December of 2007.

In the general election, Udall easily defeated Pearce, part of a Democratic wave which eventually, briefly, resulted in 60 senators who caucused with Democrats.

Democrat Jeff Bingaman was the second-longest serving U.S. Senator, and he spent most of his career was serving alongside Domenici after being elected in 1982.

U.S. Rep. Martin Heinrich, who won his congressional seat in 2008, won the Democratic primary over State Auditor Hector Balderas. Chávez again announced his candidacy for Senate, but withdrew before the primary, this time to run for U.S. House.

Like in 2008, Wilson opted to run for the seat. This time, Steve Pearce (who won back the 2nd Congressional District seat in 2010) didn’t run. While businessman Bill English and Lt. Gov. John Sanchez announced they would run, both withdrew ahead of the primary. Instead, Wilson faced businessman Greg Sowards and easily defeated him 70 percent to 30 percent.

Heinrich is currently in his second term in office, after having won re-election in 2018.

The first elections for U.S. Senate took place when New Mexico gained statehood in 1912—before the ratification of the 17th amendment, which allowed for direct election of Senators. This meant legislators, not a statewide electorate, chose senators.

And, since New Mexico was a new state, neither had an incumbent.

Legislators elected Catron and Fall in a bribe-filled (on all sides) and tumultuous process that took eight ballots before legislator William Henry “Bull” Andrews withdrew, as described by David Hodges Stratton in the 1998 book Tempest Over Teapot Dome: The Story of Albert B. Fall.

Since both men couldn’t serve terms that ran concurrently, the two had an impromptu lottery for the staggered terms, in which Fall drew the short strip: His first term would last just 11 months.

Stratton wrote that efforts by Fall to rush the vote on the full six-year term were stymied by Andrews’ stalling tactics. In the end, more chicanery (Stratton cited the phrases “wild scenes” and “fistic and verbal combats” from contemporary descriptions of how it came about) resulted in Fall’s election for a full term over Andrews.

Fall also despised Catron, and, Stratton wrote, “blocked his colleague’s renominiation in the state Republican convention of 1916 and handpicked a replacement candidate.”

In 1928, Octaviano Larrazolo made history when the former governor became the first Hispanic U.S. Senator. Larrazolo did so while also serving the shortest term in state history.

When Jones died in 1927, Gov. Richard C. Dillon appointed Bronson M. Cutting to replace him. Cutting opted not to run for the rest of the unexpired term (Dec. 7, 1928 to March 4, 1929) and instead Larrazolo ran and won, defeating Democrat Juan Vigil. At the same time that Larrazolo was elected, however, Cutting was elected to serve the next full, six-year term when he defeated Democrat Jethro S. Vaught. Cutting himself died in office in 1935 in a plane crash. He was replaced with Democrat Dennis Chavez, whom he had narrowly defeated in the 1934 election.Larrazolo, who was “gravely ill,” according to a U.S. House of Representatives biography, even as he served his short Senate term, and died in 1930.