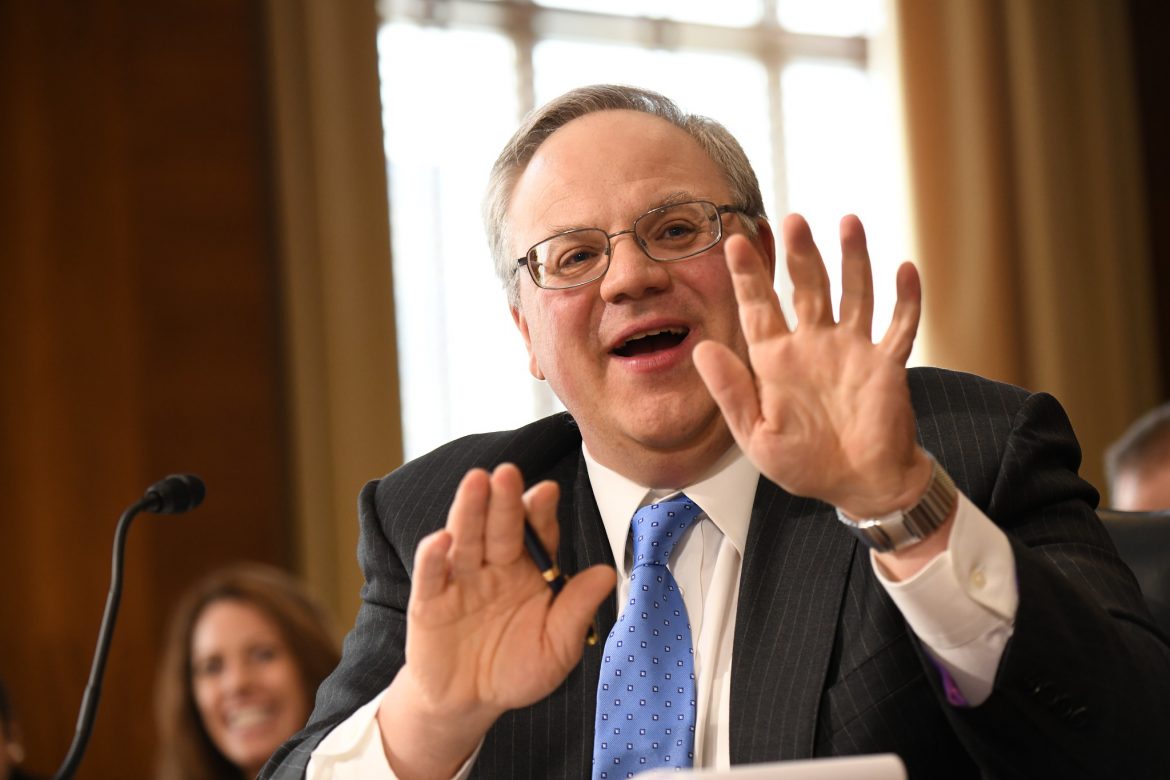 David Bernhardt at his confirmation hearing with the Senate Energy and Natural Resources Committee on March 28, 2019.

Under Republican and Democratic presidents from Nixon through Obama, killing migratory birds, even inadvertently, was a crime, with fines for violations ranging from $250 to $100 million. The power to prosecute created a deterrent that protected birds and enabled government to hold companies to account for environmental disasters.

But in part due to President Donald Trump’s interior secretary nominee, David Bernhardt, whose confirmation awaits a Senate vote, the wildlife cop is no longer on the beat. Bernhardt pushed a December 2017 legal opinion that declared the 1918 Migratory Bird Treaty Act applies only when companies kill birds on purpose.

Internal government emails obtained by Reveal from The Center for Investigative Reporting provide evidence of federal wildlife agents opting out of investigations and enforcement, citing that policy change as the reason.

First enacted to implement a 1916 treaty with Canada, the 1918 law was written to protect migratory birds – as well as their nests, eggs and even feathers – from being captured, sold or killed “at any time, or in any manner.” Similar treaties were signed by the governments of Mexico, Japan and the Soviet Union, now Russia, and included in the law.

The reinterpretation of the bird law by the administration may run afoul of these long-standing treaties. The issue is on the agenda of a trilateral meeting among the U.S., Canada and Mexico this week.

“The Government of Canada continues to interpret the century-old Migratory Bird Convention as to prohibiting the incidental take (killing or harming) of migratory birds, their nests and eggs,” said Gabrielle Lamontagne, a spokeswoman for Environment and Climate Change Canada. She noted that Canada is analyzing how the reinterpretation of the U.S. law will affect conservation of birds that migrate between the U.S.and Canada. Reveal is awaiting responses from the three other nations that have migratory bird treaties with the U.S.

A retired U.S. Fish and Wildlife official who helped negotiate the amendments to the treaties with Canada and Mexico in the 1990s says Trump’s policy is out of step with international obligations.

“I think a good argument could be made that the current Interior policy does not comply with the treaty with Canada,” said Paul Schmidt, a 33-year veteran of the Fish and Wildlife Service who was promoted to assistant director under President George W. Bush.

Emails obtained by Reveal provide evidence of how the revision is affecting law enforcement in the U.S. For example, after a pipeline burst in Idaho last April, spilling diesel into a pond and wetland, two coolers full of dead birds were dropped off at the Fish and Wildlife office in Boise. In an email about what to do with the dead birds, a Fish and Wildlife agent wrote that “we are no longer involved’’ when birds are killed in oil spills.

Agents had a similar reaction when a tugboat spilled oil into Great Harbor in Woods Hole, Massachusetts, killing dozens of birds.

“As this spill involves the incidental take of birds protected by the Migratory Bird Treaty Act, there is currently no enforcement action planned,” according to an email from a Fish and Wildlife agent.

An email about a timber harvest in Michigan said Fish and Wildlife no longer prohibits loggers from cutting down trees with nests in them, even if it destroys live eggs or chicks. (In this case, however, Michigan’s state agency stepped in, and saved the great blue heron nests and chicks.)

Another email from October 2018 shows that Fish and Wildlife saved $2.5 million by not filling 10 positions primarily related to investigating violations of the Migratory Bird Treaty Act. The agency refused to discuss the specific examples or staffing decisions.

The Interior Department resisted the documents’ release. The Natural Resources Defense Council, the environmental group that provided the heavily redacted emails to Reveal, had to sue to get them after the Interior Department failed to respond to a public records request. The council is one of several environmental groups and eights states suing to restore full bird protections.

There’s a lot at stake for birds, people and law enforcement in this fight.

Millions of birds die every year due to waste pits for mines and oil fields, electric power lines, wind turbines, communications towers and commercial fishing. The threat of prosecutions and fines was a powerful tool to encourage industries to figure out ways to avoid killing birds. Oil companies put nets over waste pits. Electric companies separated wires so eagles and other raptors wouldn’t get electrocuted. Fishing crews put weights on the long lines so birds wouldn’t get drowned when they dove for the bait. Many birds were saved.

Scientists caution that weakening the Migratory Bird Treaty Act imperils many types of birds that are endangered or declining in numbers, and it also eliminates an important source of wetlands restoration funding: penalties paid by violators.

“It will unravel a lot of progress over the past several decades,” said Colleen Cassady St. Clair, a professor of biological sciences at the University of Alberta who has studied the impact on birds of the oil sands industry in Canada. Restored wetlands help bolster fish and shellfish, clean water and protect people from big storms.

“Those conservation efforts are benefiting birds, sure. But they’re also benefiting many other species that are using coastal habitats, and they’re also benefiting people,” said Amanda Rodewald, an ornithologist and professor at Cornell University. Doing away with the fines “actually could be putting other communities at risk from storm surges and other negative environmental impacts,” she added.

There’s a lot at stake for energy companies, too, which is why they’ve worked so hard to weaken this act. Energy companies fought this policy in court and lobbied Congress and the Interior Department to abandon it.

Bernhardt, a former industry lawyer, played an important role in directing the new interpretation, as previously reported by Reveal. An email from the department’s top lawyer, Daniel Jorjani, said Bernhardt’s office had been involved “since Day 1.”

At least one of Bernhardt’s former clients, the Independent Petroleum Association of America, pushed for the change. But Bernhardt did not consider it a conflict of interest to work on the issue.

“He’s not at all recused from dealing with MBTA because that’s a broad matter,” Faith Vander Voort, the department’s press secretary, said after discussing Reveal’s questions with Bernhardt.

The Senate Energy and Natural Resources Committee voted 14-6 on April 4 in support of Bernhardt’s nomination, and the full Senate is expected to confirm him as secretary. Some congressional Democrats who oppose Bernhardt’s nomination cite his cozy relationship with industries whose profits are affected by decisions at the Interior Department.

“This clearly was an issue that his clients had been working to change. And apparently he did their bidding,” said Sen. Chris Van Hollen, D-Md.

In the past, companies have paid enormous fines under the Migratory Bird Treaty Act. For instance, in 2010, the Deepwater Horizon rig explosion killed 11 people and triggered an 87-day oil gusher in the Gulf of Mexico. Scientists estimate hundreds of thousands of birds were killed. BP agreed to pay $100 million for criminal violations of the Migratory Bird Treaty Act.

In a Senate hearing last May, Van Hollen questioned whether the policy change would affect efforts to hold oil companies responsible for spills. Former Secretary of the Interior Ryan Zinke insisted it would not: “That is not what we’re talking about.”

That seemed to contradict instructions issued by the Fish and Wildlife Service. In the past, the memo said, the Interior Department pursued “claims against companies responsible for oil spills that incidentally killed or injured migratory birds. That avenue is no longer available” due to the 2017 legal interpretation, known as an M-Opinion.

Van Hollen sought clarification, and a Fish and Wildlife official finally responded to him in a Feb. 21 letter. “In practice, the new M-Opinion means that if an oil or hazardous chemical release occurs and is not done with the intent of taking migratory birds, the MBTA does not apply,” according to the letter from Margaret Everson, the agency’s principal deputy director.

Former agents rue the loss of an important tool to prod industries to protect birds.

As a rookie agent for the Fish and Wildlife Service in Alaska 30 years ago, Gary Mowad traveled across Prince William Sound for weeks on end, plucking dead birds from “big globs of oil” spilled from the Exxon Valdez tanker.

The Fish and Wildlife Service used that oily evidence from Mowad and other agents to estimate that 300,000 birds were killed in that 1989 spill. Exxon agreed to pay $125 million in fines and restitution for criminal charges, including criminal violations of the Migratory Bird Treaty Act.

Mowad compares the Trump administration’s reinterpretation as removing all the speed limits and troopers on highways: “For birds, their highways became a lot more unsafe because there’s no deterrent for bad actors.”

This story was edited by Matt Thompson, Narda Zacchino, Michael Corey and Andrew Donohue and copy edited by Stephanie Rice.