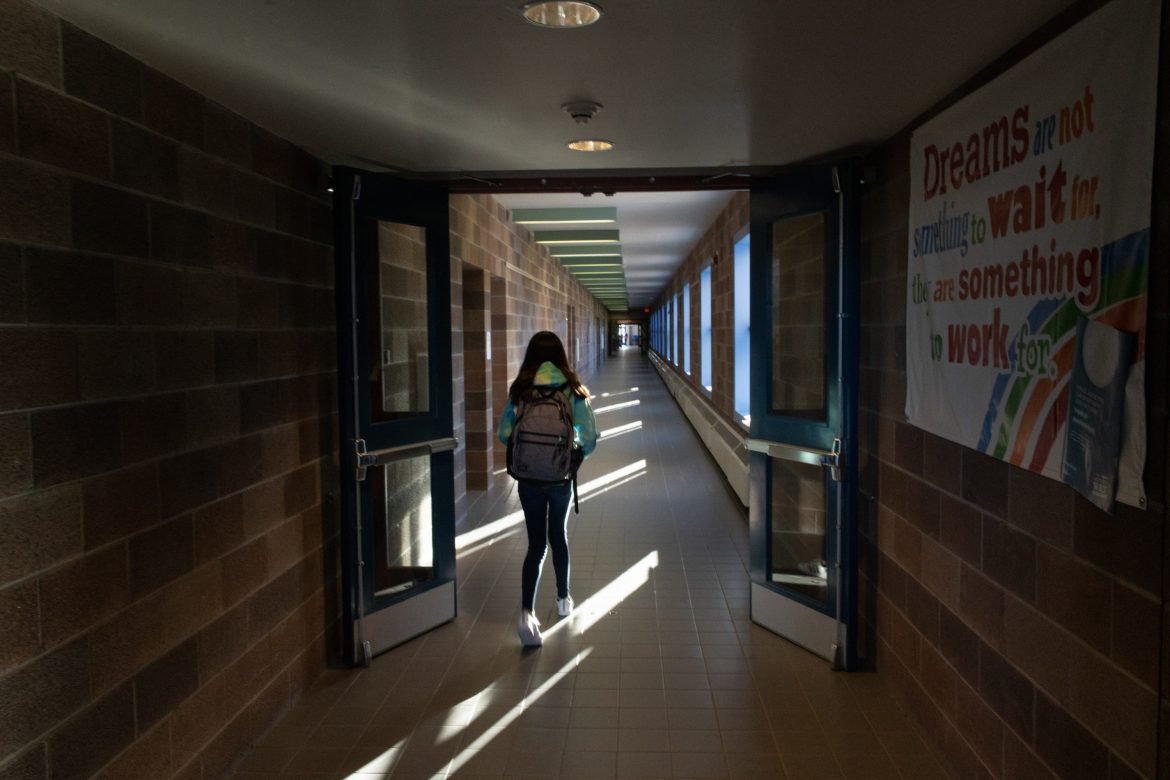 QUESTA – When the fire alarm sounded before lunch in November of 2017, the staff at Alta Vista Elementary School knew they had a problem. A 6-year-old boy confined to a wheelchair needed to evacuate with the rest of his class. Unfortunately, the school had never purchased a chair that would let him leave the building.

As the alarm kept sounding, teachers hovered nearby and debated what to do. The school had never put together an evacuation plan for the child. Finally, a physical therapist picked up the distraught boy and carried him out in her arms.

Though it wasn’t a real emergency (a student had pulled the alarm as a prank), the event laid bare the dire situation of special needs students in a district that suffers from severe – and often self-inflicted – budget woes.

The mountain-rimmed village of Questa, just south of the Colorado border, is home to one of the worst performing districts in the state, its schools earning multiple F’s from the Public Education Department.

But in recent years, its most immediate problems have centered on failures providing services to its 68 special needs students. Administrators have time and again denied pay to nurses, therapists and special education staff, according to complaints filed with the state.

Further complicating the problem, the district has lost an astounding number of employees. Michael Lovato, the current superintendent of the Questa Independent School District, is the fifth person to take on the job in two years.

Four school nurses have left since 2018, according to staff emails; in recent years the school has also lost physical therapists, speech therapists and special education teachers. Some lasted only a few weeks.

“It’s just a full-blown mess like nothing I’ve ever seen before,” said Misti Oracion, who until recently worked with parents in Questa as a liaison with the nonprofit group Parents Reaching Out, a statewide organization that advocates for families of children with disabilities.

Investigators from the Public Education Department have identified such violations as widespread among Questa’s special education students. Responding last school year to a formal complaint from a physical therapist, PED randomly sampled a group of special needs students in Questa and found they had collectively been denied 45 hours of services over a 10-week period.

But based on the district’s budget, the failures don’t add up. The PED funds the bulk of schools’ special education budgets through the state equalization formula, which substantially increases districts’ money based on the number of special needs students.

Physical therapists and other support staff are reimbursed through Medicaid. Additional federal dollars to cover special education for Questa amounted to $134,821 this current school year. Taken together, state and federal funds should ostensibly be enough to cover the services denied to the district’s special ed population.

“If a school district asserts that it does not have the funds to provide special education services, that means that those funds were somehow mismanaged,” said Katie Gordon, an attorney with Disability Rights New Mexico, which has worked with families denied services in Questa for several years.

Yet deciphering exactly how these funds are spent is all but impossible. Questa’s budget, like that of many school districts, does not specify the amount budgeted for special education, but lumps it within the broader budget.

PED has over the years taken drastic measures in Questa. In 2012, the department temporarily suspended the authority of the Questa School Board after finding a string of violations, including fistfights breaking out during board meetings and a school board member awarding district contracts to his own plumbing and electrical business.

The board disputed PED’s charges and many of the suspended members have since been reelected.

Meanwhile, many parents and advocates say the dysfunction and financial problems have continued to the present day — with unsurprising results. Interviews with a dozen parents and teachers in Questa revealed a litany of problems.

Patricia Michael says she was not informed that her 5-year-old son had stopped receiving speech therapy at school for more than a year; he is now hopelessly behind in first grade. Cori Jenkins pulled her special needs daughter out of Questa schools in 2017 following what she describes as years of inadequate education; she now drives an hour each day to a charter school in Taos. Kristi Padilla, the mother of the boy for whom the school never purchased the appropriate wheelchair, also pulled her child out of school.

Other parents say they too are considering leaving.

Questa has already lost nearly 11 percent of its student population in the past two years. Enrollment currently stands at 335 students in four schools, and if more leave, it will mean a significant loss of per-pupil funding for the district.

Newly appointed superintendent Lovato, who formerly served as Special Education Director for PED, is vowing to correct the situation.

After identifying what he describes as “significant deficits” during his first weeks in office, Lovato has initiated an internal audit of all special needs students’ files and is requesting meetings with those students’ parents.

Jessica Cisneros isn’t optimistic. Her daughter Faith, a seventh grader, has a rare seizure-inducing condition called tuberous sclerosis complex. Faith requires a daily routine of medications: an anticonvulsant medication and constant monitoring throughout the school day. Her most recent epileptic seizure, last year, was quickly caught by the school nurse and treated with emergency medication.

But amid chronic turnover, the school district has gone months without a nurse — a fact district officials neglected to inform parents, according to complaints filed with PED.

Without a nurse consistently on staff, ambulances were called to the schools at least seven times in the past year — sometimes for issues that would normally be handled by a school nurse.

These days, Cisneros slips Faith a cellphone each morning and tells her to call the moment she feels a seizure coming on.

“I go to work and I sit there and stare at my phone, because I’m always afraid it will ring and it’s going to be Faith,” she said. “She could fall at the drop of a hat, and for all I know there’s nobody on staff that could take care of her.”

Correction: This story originally said the fire alarm sounded last month and that the student in the wheelchair was seven years old. The fire alarm incident happened in November of 2017 and the boy was six years old.