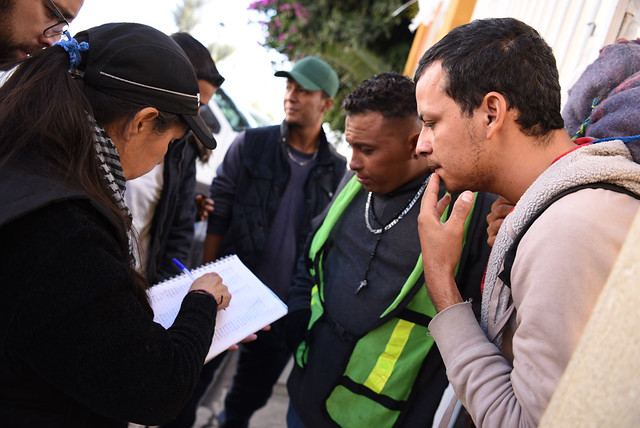 One morning this spring in the parking lot of a mall south of Tucson, Arizona, four people gathered around a gray minivan as the sun spilled into the still-cold desert air. Bags loaded with toys and stuffed animals filled the trunk of the van — donated by the Green Valley-Sahuarita Samaritans, one of dozens of humanitarian aid groups working to help migrants in the Arizona Borderlands. The donations were destined for an aid station for migrants in Nogales, a city that straddles the U.S.-Mexico border just 40 minutes south of here.

Shura Wallin, a petite woman in her 70s with an animated face and boundless energy, has led weekly volunteer trips to the aid station, or comedor, for more than 20 years. It’s run by the Kino Border Initiative, a binational organization that helps migrants in need. Before hopping into the driver’s seat, Wallin held up a stuffed animal, a purple pig, joking about what might happen if we were stopped at the border and searched. “This is what we’re smuggling,” she said, making all the volunteers laugh.

In recent months, Wallin’s trips have grown increasingly urgent as ever-growing numbers of people — often families with young children — arrive at the Southwest border. By law, anyone who reaches U.S. soil has the right to apply for asylum, and anyone who can establish a credible fear of returning home must be granted a hearing. The Trump administration has tried to deter people from seeking asylum altogether by restricting applications and turning many asylum seekers away. But a very different response is underway here in the Borderlands — a grassroots effort led by a network of NGOs and local volunteers who provide food, shelter and other services to thousands of migrants in need.

BY 8:30, when Wallin and the other Samaritan volunteers arrive, people are already lined up outside the comedor. Among those waiting for a meal is a family from the Mexican state of Guerrero. The mother, who asked that her name not be used, told me that they had never planned on going to America. A year ago, however, the cartel violence in their hometown got so bad they felt like they had no choice but to leave. They briefly thought about crossing the desert on their own, then turning themselves in to ask for asylum. But their three kids are so young, they decided it would be better to wait out the backlog of asylum applicants in Nogales, on the Mexican side. “We did it for the children,” the mother said, “so they’d be safe.”

Inside, Wallin and the Samaritans join other volunteers, peeling potatoes and setting the long tables for the first meal of the day. This was not the migrant population that the comedor was originally designed to serve: Back in 2009, the soup kitchen served mostly immigrants who had been deported from the U.S. to Nogales with only the clothes on their backs.

But in recent years, there has been a shift in how migration is playing out along the U.S.-Mexico border. In the past, it was young men and seasonal workers from Mexico who tried to illegally cross the border. Now, families and unaccompanied children seeking asylum are turning themselves in to U.S. Border Patrol agents. Overall Border Patrol apprehensions are at historic lows, but families now account for the majority of arrests. Most are fleeing rampant violence, corruption and the escalating impacts of climate change that are making parts of Central America and Southern Mexico practically uninhabitable.

“A lot of people are feeling like they can’t survive,” Joanna Williams, the director of education and advocacy at the Kino Border Initiative, told me. At the same time, for nearly a year, Customs and Border Protection officials in Nogales have been restricting the number of asylum applications they process per day — forcing migrants to wait in the border city for weeks at a time.

A government report made public in October found that the practice of rejecting applications from asylum-seekers and making them wait in Mexico has likely prompted more people to cross illegally. Though the U.S. government sent troops to string concertina wire along the border wall in Nogales, said Williams, it did nothing to provide more resources to improve the asylum process.

The Mexican government has been similarly unresponsive, she added, treating the influx of asylum seekers as a temporary problem that would pass. But for the past seven months, the number of asylum seekers arriving at the border has continued to rise, and without groups like the Kino Border Initiative, many of them would be sleeping on the street. In Nogales, shelters are at maximum capacity, and the comedor has been serving an average of more than 250 people at each mealtime — more than three times its normal clientele.

On both sides of the border, said Williams, “we are completely reliant on civil society.”

A FEW DAYS AFTER VISITING NOGALES, I stood in the back courtyard of Tucson’s Benedictine Monastery with Teresa Cavendish, the director of operations for Catholic Community Services. A local nonprofit, it has retrofitted this historic building to create a temporary shelter for migrant families.

It’s a way station of sorts for families released by Immigration and Customs Enforcement (ICE) from short-term detention facilities since, by law, children cannot be held for more than 20 days. At the shelter, they can arrange transportation to sponsors in the U.S. where asylum-seekers can stay — often wearing ankle monitors — while they pursue their claims in immigration court.

When the monastery opened as a shelter last July, Cavendish thought they’d have two weeks to shift their operations from the other, smaller shelters. But within six hours, an ICE representative called and said they were about to release a hundred more migrants from detention. “We had no choice but to make it work,” she said.

Ever since, Cavendish has been trying to coordinate up to 60 volunteers per day who do everything from preparing meals, delivering medical care and translating for Indigenous language speakers, to helping arrange bus tickets for migrants so they can travel to sponsors throughout the country.

In a huge front room ringed with stained glass windows, behind the altar and the pews, volunteers had set up rows of cots provided by the Red Cross to further expand bed space. The monastery had been deconsecrated when it was sold. Now that it was operating as a shelter, Cavendish said, the nuns “feel like it’s being turned back over to God.”

Still, she worries about the future. The volunteers can only use the monastery until the end of July. But “if the need’s not abating,” she said, “we can’t just abandon this effort on this scale.” In the meantime, she is looking into the possibility of using abandoned schools and hotels in Tucson.

A young boy zooms by us on his scooter, down one of the monastery’s cavernous hallways. “Dude! No en la casa,” Cavendish yells after him and smiles at me. “It’s a little nuts, isn’t it?” Even here and despite all they’ve been through, it seems, that kids will still be kids.

For Cavendish, as difficult as the situation appears, this is not the crisis that Trump has been tweeting about. “These people’s lives are in crisis, but their need to come here is not a crisis in and of itself,” she said. “As a country, I think America is capable of managing all of this.”

Sarah Tory is a correspondent for High Country News. She writes from Carbondale, Colorado.

Email HCN at editor@hcn.org or submit a letter to the editor.