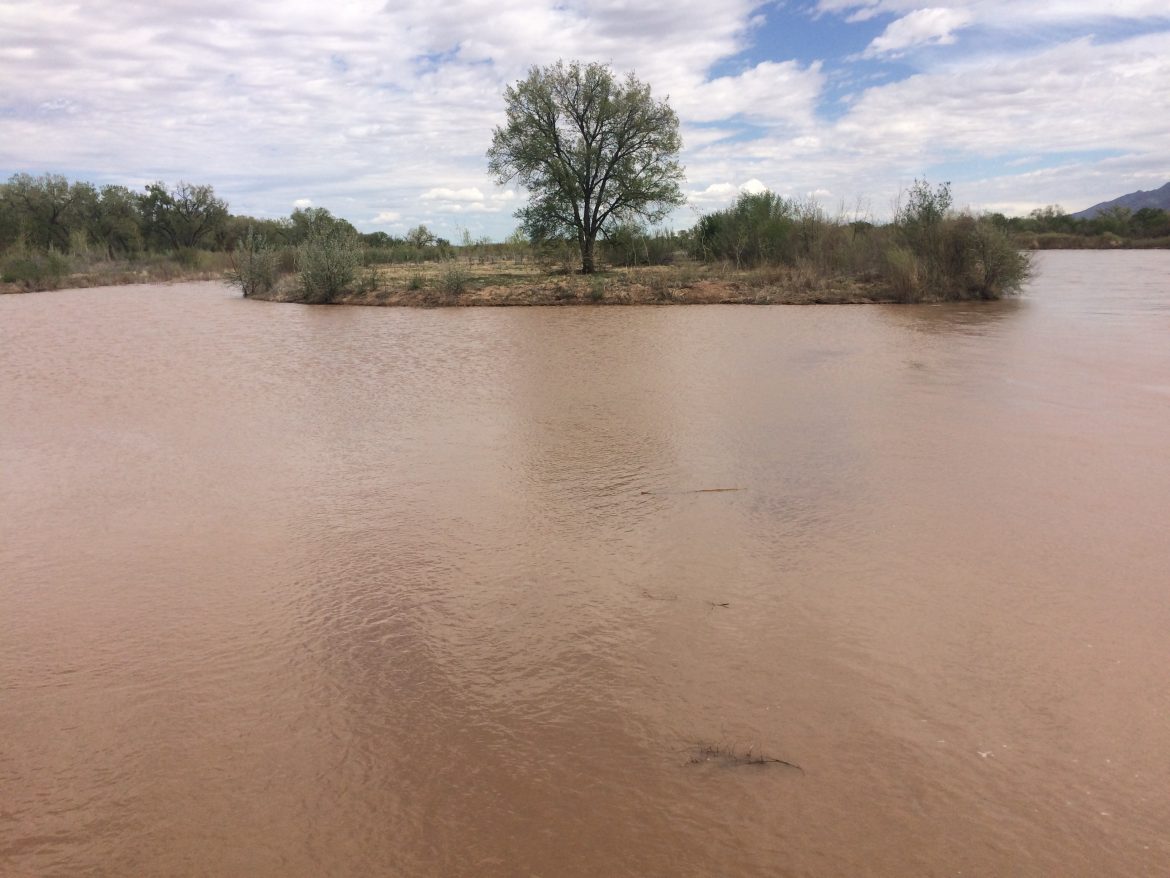 The Rio Grande in Albuquerque. To the right is the river's main channel, to the left, water entering a restoration project's side channel.

This time last year, the riverbed of the Rio Grande south of Socorro was sandy, the edges of its channel strewn with desiccated fish. Even through Albuquerque, the state’s largest river was flowing at just about 400 cubic feet per second, exposing long sandbars and running just inches deep.

This year, the Middle Rio Grande is booming, nearly ten times higher than it was last April—and it’s still rising. Running bank-to-bank, the river’s waters are lapping up over low spots along the bank, nourishing trees and grasses, replenishing groundwater and creating much-needed habitat for young fish and other creatures.

This year’s high flows through the Middle Rio Grande come thanks to a mix of natural conditions, like snowpack, and also manipulation of the river’s flows from dams, diversions and interstate water-sharing agreements.

“These late spring storms are really the icing on the cake heading into the spring runoff,” said Mary Carlson, a spokesperson for the U.S. Bureau of Reclamation’s Albuquerque Area Office. “The snowpack is far above average and we expect a few months of really good flows on the Rio Chama and Rio Grande.”

Earlier this week, rainstorms hit the Albuquerque area. At the same time, the U.S. Army Corps of Engineers ramped up releases from Cochiti Reservoir.

“We’re closely watching the weather forecasts and are cautious as rain on snow can speed up the runoff significantly,” Carlson said, adding that Reclamation is “coordinating closely with the Army Corps of Engineers and Middle Rio Grande Conservancy District to monitor the river during the higher flows and our river maintenance crews are prepared to respond to any issues that threaten Middle Rio Grande Project facilities or that could impact efficient water conveyance.”

This month, Reclamation released its 2019 operating plan for the Middle Rio Grande and the stretch of the river below Elephant Butte Dam. In southern New Mexico, the federal agency plans to move water from Elephant Butte Reservoir to Caballo Reservoir beginning on May 3. Then, on May 31, they’ll begin sending water from Caballo downstream to irrigators in southern New Mexico and Texas.

Combined storage in Elephant Butte and Caballo is about 324,000 acre feet as of Thursday, or roughly 14 percent capacity. Last fall, storage in the two reservoirs dropped below three percent.

Levels in those two reservoirs matter not only to downstream water users, but also those upstream along the Rio Grande.

Since last May, New Mexico has had to abide by Article VII of the Rio Grande Compact of 1938. When combined storage in Elephant Butte and Caballo reservoirs drops below 400,000 acre feet, Colorado and New Mexico can’t store water in any of the upstream reservoirs built after 1929. This includes El Vado Reservoir on the Chama River.

Now, water managers expect that New Mexico will be out of Article VII restrictions in mid-May.

Once that happens, the Middle Rio Grande Conservancy District, which supplies water to irrigators in the Albuquerque area, can start holding water in upstream reservoirs. They’re expecting to store about 40,000 acre-feet of water before water levels drop again later this year.

And, Reclamation expects that New Mexico will remain out of Article VII until late August or early September.

Variability’s the name of the game

In the short-term, the winter’s healthy snowpack and the spring precipitation have improved drought conditions in many places in New Mexico, said Royce Fontenot, senior service hydrologist at the National Weather Service in Albuquerque. In the long-term, he said, drought is still an issue.

“Last year was pitiful, this year’s great…next year could be pitiful again,” he said. “So what can we expect in the future? We can expect variability.”

Meanwhile, he warned that the runoff and spring rains are important to pay attention to for another reason: safety. Many of New Mexico’s rivers and streams will experience higher flows this spring, he said.

“If you just moved to New Mexico in the last 20 years, you’re not used to seeing runoff at full runoff,” he added. “If you’re going to be out there recreating, check the forecast and ask yourself, ‘Is this water maybe moving faster than I think?’ and if you’re used to it at a lower stage, ask yourself, ‘Am I still comfortable with my skills?’”

The river’s spring flows will also give a boost to endangered species, including the Rio Grande silvery minnow.

Biologists are already finding eggs, though spawning will peak later in the spring as the temperature rises.

“The water’s not quite warm enough all day, so it will probably be another three weeks before there’s a huge peak in the number of fish that are spawning,” said Thomas Archdeacon, a fish biologist with the U.S. Fish and Wildlife Service’s New Mexico Fish and Wildlife Conservation Office. “I’d guess in a year like this, there could be a two-month long spawning period.”

The slow, backwater habitat created by the rising river is good for the fish, allowing eggs and larvae to survive. And what’s good for endangered species is good for the rest of the river’s ecosystem, said Archdeacon.

Later this spring and summer, the river will shift again. Runoff will decline and once the state is out of Article VII, water will be stored in upstream reservoirs instead of passing through the Middle Rio Grande to Elephant Butte. Plus, irrigators will pull more water from the river during the summer months.

And biologists like Archdeacon will keep an eye on what happens to endangered species.

“I like to call it the umbrella species,” Archdeacon said of the silvery minnow. Protecting species like the minnow means protecting all the other species as well, he said, and protecting the cottonwood galley.

Correction: Article VII restrictions do not affect Heron and Abiquiu reservoirs, as the article originally stated. Those two reservoirs are not affected by the Rio Grande Compact restrictions because they either store imported San Juan-Chama water or pass water through from El Vado.