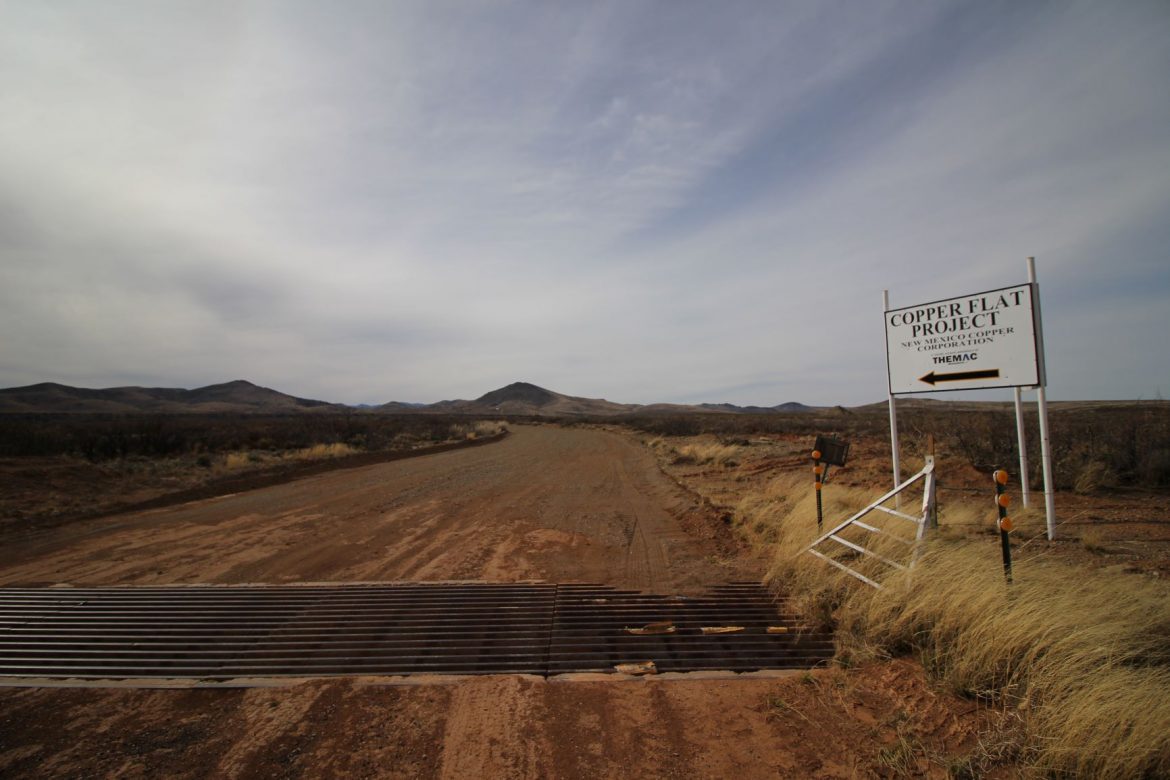 Outside the town of Hillsboro, N.M., remains of the Copper Flat Mine are visible down a graded gravel road off Highway 152. A white pickup truck moves along in the distance. And there are a couple of buildings and a small electric line.

The mine operated for just a few months before closing in July 1982. But a new company hopes to reopen it on 2,190 acres of federal and private land, and put to use water rights it says date back decades. Now, the federal government has released its environmental impact statement (EIS) and recommendations for the mine.

In April, the U.S. Bureau of Land Management finalized its 2,096-page EIS, noting that its “preferred alternative” would allow New Mexico Copper Corporation (NMCC) to process 30,000 tons per day of copper ore at the mine over the course of 12 years. NMCC is a subsidiary of the Canada-based company, THEMAC Resources.

Later this spring, the BLM will issue what’s called a “record of decision,” and the project can potentially move forward.

Hillsboro resident Max Yeh is still wading through the EIS and its three appendices. He’s overwhelmed by the sheer volume of the analysis. And he finds himself questioning the process, which is required under the National Environmental Policy Act.

“The decision on this, the record of decision, will be made in Washington, based on the information that is gathered here locally,” Yeh said. “And there is an indication here that the people who are not on the ground don’t understand the local situation.”

In the draft environmental impact statement, the BLM ignored litigation over the mine’s water rights, he said: And while the final EIS acknowledges that the company’s water rights are being contested in court, it contains factual errors.

This particular local situation has a long history.

To run the mine, NMCC wants to use groundwater rights that two men purchased after operations were abandoned at Copper Flat in 1982. William Frost and Harris Gray, along with the company and its attorneys, tried to show that those rights were still valid, even though the water hadn’t been put to use over the past four decades—or even when the mine operated.

In New Mexico, water is a public resource; it belongs to the people of the state. To maintain legal rights to the water—from rivers or streams or pumped from beneath the ground—people or entities must put it to “beneficial use.”

In December 2017, New Mexico Third Judicial District Court Judge James J. Wechsler found that the combined water right of Frost, Harris and NMCC is only 861.84 acre feet per year—far less than the 6,000 acre feet the company says it needs to operate.

The company appealed Wechsler’s decision, with support from the New Mexico Mining Association and GCM, a privately-owned company with interest in the water rights.

Now, the state of New Mexico and Turner Ranch Properties, which owns the nearby Ladder Ranch, have until later this month to file their answer briefs. They’re supported by the State of Texas and Pat Gordon, the Texas Commissioner on the Rio Grande Compact Commission, as well as by Elephant Butte Irrigation District (EBID), the Navajo Nation and the Sierra Club.

While residents and ranchers worry about local impacts from the mine and its tailings and pit, the mine has drawn wider attention. That’s because downstream water users in New Mexico and Texas are concerned that groundwater pumping could affect the Lower Rio Grande Basin.

In 2013, Texas sued New Mexico and Colorado over the waters of the Rio Grande, alleging that by allowing farmers in the southern part of the state to pump groundwater, New Mexico violated the Rio Grande Compact and didn’t send enough water downstream. The U.S. Bureau of Reclamation also joined the suit, saying that New Mexico is allowing people to use more water than they legally should. If New Mexico loses that U.S. Supreme Court case, southern farmers and towns could be forced to curtail groundwater pumping, and the state could be liable for billions of dollars in damages.

There are more moving pieces, too.

Last December, at the tail-end of the administration of Gov. Susana Martinez, the New Mexico Environment Department approved the company’s groundwater discharge permit—just one of the state permits the company will need to start operations.

The most troubling problem, said Charles de Saillan, an attorney with the law center, is how NMED classified the mine’s pit lake. Once mining ceases, the open pit will fill with water—water which will have high levels of mercury, selenium and vanadium.

“The Environment Department has taken the position that this pit lake will not be a ‘water of the state,'”—protected under state law—”and as a consequence, the [water quality] standards don’t apply,” said de Saillan. “We take issue with that.”

Under state statute, he said, a body of surface water is a “water of the state” unless it’s entirely on private property and its waters won’t “combine” with other waters, including groundwater.

“Making predictions on what the pit is going to look like, and what the pit lake is going to look like, before it’s even constructed, and making those predictions to within a couple of feet, we think is fairly absurd,” de Saillan said. Moreover, he called NMED’s assertion that the pit lake’s water won’t mix with any other waters “troubling,” and he said it departs from the Environment Department’s handling of similar situations in the past.

The law center and its clients also dispute how the underlying bedrock has been characterized by the company, and they’re concerned about risks to nearby properties, a lack of planning for groundwater monitoring and uncertainty over long-term financial assurances for cleanup after the mine’s operations end.

After opponents appealed the permit, in April the state’s Water Quality Control Commission appointed a hearing officer. NMED’s public information officer, Maddy Hayden, said the hearing officer has yet to announce a scheduling conference. But once that happens, a briefing timeline and dates for oral arguments will be established.

NMED will also need to issue a certification, showing the company’s mining closure plan meets state environmental standards. Then, the Mining and Minerals Division of the New Mexico Energy, Minerals and Natural Resources Department can issue a mining permit.

Whether it comes to understanding the intricacies of the battle over the water rights—or even how water rights are administered in New Mexico—Yeh wonders how someone in Washington, D.C. can decide the future of New Mexico’s land and water.

Throughout Hillsboro, population about 100, yellow banners hang from fences throughout the tiny town. The black and red lettering blares out, “PROTECT YOUR WATER. SAY NO!! TO THE COPPER FLAT MINE.”

“You can have a whole bunch of maps, with names of gulches and arroyos and creeks running into each other, but someone sitting in Washington, who is not familiar with the on-the-ground situation, it will be very abstract to them,” Yeh said. “Their decision, which is ostensibly based on the facts given them by the local office, well, there are details that just don’t make any sense locally.”

NMPR reached out to NMCC via the media link on its webpage, but did not hear back from the company before publication.