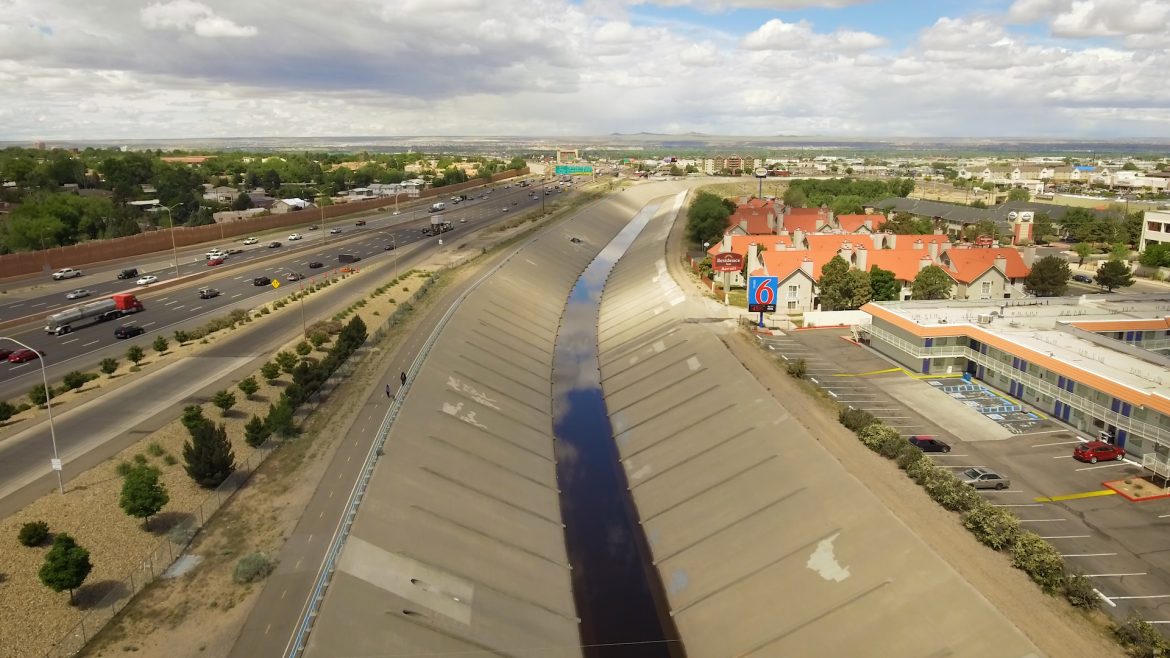 The North Diversion Channel along Interstate 40 in Albuquerque

Earlier this spring, or perhaps during a summer monsoon storm, you’ve probably seen floodwaters ripping down the North Diversion Channel in Albuquerque. That’s the huge concrete channel that runs alongside Interstate 40 and then turns north toward the Pueblo of Sandia. It’s probably the most visible sign of the Albuquerque Metropolitan Arroyo Flood Control Authority, or AMAFCA.

Other than the tumbleweed snowman, of course.

“That’s kind of the embarrassing thing, when you say ‘I’m the AMAFCA guy,’ and they’re saying ‘Who is AMAFCA?’” says Jerry Lovato, AMAFCA’s executive engineer. “‘It’s like, ‘Well, we do the tumbleweed snowman.’”

Every December, they set up the snowman near their office, and it’s visible to traffic on I-40. Over the years, it’s become a recognizable symbol of the start to the holiday season.

AMAFCA’s real job is to protect the city from flooding. Today, they are responsible for flood control across 353 square miles and maintain more than 100 miles of channels and arroyos. They also have 71 flood control dams and ponds and 131 water quality structures.

“When AMAFCA was created in 1963, the idea was to protect life and property, that’s our mission, but to do it as quickly and efficiently as possible,” Lovato says. “So, it was basically: grab the water, divert it and get it to the river as quickly as you can.”

That worked well until about the mid-1980s, he says.

When stormwater moves through a city, it carries trash and sediment.  It also picks up harmful things like oils and gasoline, PCBs, pesticides and dog waste. Water quality regulators at the U.S. Environmental Protection Agency told AMAFCA they needed to clean the water before discharging it into the Rio Grande.

“When water’s passing you by at 30 feet per second, it’s very hard to try to clean it before it gets to the river,” he says. “So, we were trying to slow it down or take it offline.”

But under state law, and the law that governs how the waters of the Rio Grande are shared, AMAFCA couldn’t hold onto the water for more than 96 hours.

That put them in a bind. They couldn’t let the water just pour into the river. But without a right to the water, they had to keep it moving. So, they tried something different—something that is unique to New Mexico. “Since 2012, we have been able to hold that water in a series of projects,” Lovato says. “Instead of just holding it in one spot, we now hold it in one spot and then go downstream, hold it again and go downstream again.”

At each of these stops, there are different types of engineered facilities. Some strain out the trash. Others trap sediment. And some allow the water to be absorbed into the ground.

Lovato and Nolan Bennett, AMAFCA’s field engineer, highlight Raven Pond in the South Valley as one of their newest facilities. Bennett says they work on low-impact designs, when and where that’s possible.

About four years old, Raven Pond has taken some work. Previously, it was farmland. And AMAFCA has tried to address concerns from neighbors bothered by the smell of algae. Now there’s a walking trail, and Bennett points to the tadpoles swimming through the water. There are also egrets, hawks and coyotes. With the help of the Rocky Mountain Youth Corps, they’ve harvested willows growing here for other facilities in the city.

“The willows are great to look at, they provide habitat,” Bennett says. And they also trap trash and sediment coming through the system.

Now, AMAFCA is going through another paradigm shift. Instead of seeing stormwater as a nuisance, it can be a resource.

At a recent meeting, AMAFCA’s board of directors authorized staff to start studying how to work with the local irrigation district, the Middle Rio Grande Conservancy District, and the Albuquerque Bernalillo Water Quality Authority to use some of the water that rips through the city during storms.

Ideally, stormwater could be slowed and cleaned and used in irrigation canals. Or, it could be allowed to percolate into the ground, and help restore aquifer levels.

“The problem with stormwater, is it’s unpredictable,” Lovato says. “We have one or two different storms a year that produce enough quantity of water that we could [use it to] infiltrate [the aquifer], but it’s something you really can’t hang your hat on….but anything to help enhance infiltration is a good thing.”

And when it comes to stormwater, everyone in the city has a role to play.

“We collect couches, wedding dresses, dead carcasses, construction debris… All kinds of stuff gets thrown to the channels because it’s a way people just get rid of things,” says Lovato, adding that pet waste should always be picked up, too. “It would really help us if they would take a few seconds and think about where they’re dumping their materials because it will end up in the river.”

To watch last Friday’s episode of Our Land New Mexico that aired on New Mexico PBS about AMAFCA, visit the the New Mexico In Focus website.