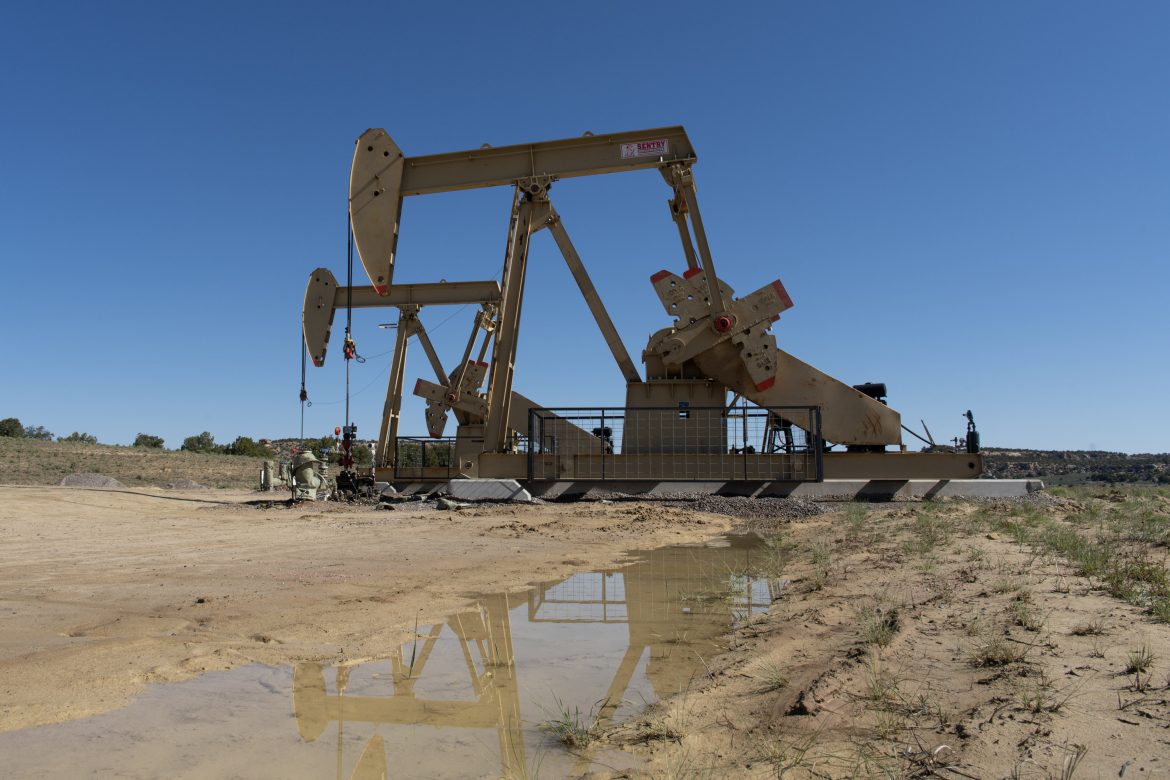 An oil well and pump jacks near Counselor.

COUNSELOR — About halfway through a late-April Sunday service at the Living Spring Baptist Church, the sermon took an unusual turn. Pastor Tom Guerito’s exhortations to trust in God and resist sin, delivered mostly in Diné, gave way to a more earthly concern: oil and gas.

“People say, ‘I smell it,’” Guerito told the 20 or so parishioners, who since 2012 have lived among an expanding constellation of oil and gas wells. But an air monitor installed nearby found nothing out of the ordinary, he said. “There’s nothing in the air. People scare each other. God will take care of us.”

Over the past seven years, hundreds of wells have risen amid the small houses and hogans scattered across this remote piñon-and-juniper-flecked stretch of high desert and pastel badlands a few miles northeast of Chaco Culture National Historical Park — and reports of health ailments have risen with them.

A 2017 citizen science report chronicled local complaints of nausea, burning eyes, respiratory problems, recurring headaches — all of which, studies have shown, can be caused by chemicals released during the extraction, processing and transport of oil and gas. But people in the largely Navajo communities here, where the new development also has brought new jobs, are divided over whether it’s a blessing or a curse.

Reassurances from the pulpit notwithstanding, some of Guerito’s parishioners worry about the consequences of living with oil and gas. “You can really smell it,” Lucy Martinez said after the service.

“Especially when it’s windy,” added Cecilia Sandoval. Her two grandsons, ages 5 and 9, have asthma. Studies have shown that emissions from oil and gas production can exacerbate the condition.

For residents who own mineral rights or have found employment in the industry, the wells are a much-needed source of income in an area with an average household income of $7,300 to $7,800 per year. But the new development has also brought more pollution to a corner of the state where, just to the north in the upper San Juan Basin, 40,000 natural gas wells have spawned a massive methane cloud — the biggest concentration in the U.S. The development has helped push San Juan County, which includes the park and several Navajo communities, to the brink of violating federal air quality standards for ground-level ozone, or smog.

Ozone can aggravate asthma and cause other respiratory problems, according to the EPA. Among the hundreds of other substances emitted during oil and gas operations are hydrogen sulfide and toluene, as well as particulate matter.

As more wells mushroom across the San Juan Basin’s southern edge, residents and community leaders are becoming increasingly concerned about the price they may be paying.

A few miles from the church, the smell Martinez and Sandoval described — an odor like rotten eggs, the signature scent of hydrogen sulfide — wafts from a cluster of eight tall tanks, each painted juniper green in a failed attempt at camouflage. Their contents are labeled in black and white: CRUDE OIL. PRODUCED WATER.

Two weeks before Guerito’s sermon, on April 14, Democratic members of New Mexico’s congressional delegation came here at the request of local residents and officials. Reps. Deb Haaland and Ben Ray Lujan, joined by Arizona Rep. Raul Grijalva and California Rep. Alan Lowenthal, had just introduced a bill that would create a “protection zone” within a roughly 10-mile radius of the park, where no new oil and gas leasing or development would be allowed on federal lands.

Haaland, a member of Laguna Pueblo, one of the New Mexico pueblos whose ancestors lived in the Chaco region for hundreds of years, peered into an infrared camera aimed at a tangle of pipes atop the tanks.

The lens revealed what the naked eye cannot see: a pair of plumes streaming into the cornflower-blue sky. The camera, developed to help the industry and regulators identify leaks, can detect invisible gases like methane — a planet-warming gas at least 25 times more potent than carbon dioxide — and about 20 other compounds.

Since 2012, almost 400 new wells have sprouted among the homes, schools and grazing lands here. The federal Bureau of Land Management (BLM) expects 3,200 wells to be drilled on 75,000 acres in the Mancos shale-Gallup sandstone by 2037, according to a 2018 report by the agency.

“There’s been a big push to develop the area in the past few years,” says Samuel Sage, the Community Services Coordinator for the Counselor Chapter of the Navajo Nation.

Advances in drilling technology, most notably horizontal drilling combined with hydraulic fracturing, have made it possible for companies to coax oil from the tight shale that underlies the Chaco area.

The bill, to be vetted in a Senate subcommittee hearing this afternoon, would bar leasing and new drilling of 316,076 acres of BLM minerals around the park. (The minerals beneath a piece of land are sometimes controlled by a different party, so while the entire Chaco protection zone is 909,000 acres, the legislation only applies to the subsurface acres of oil, gas, coal and other minerals owned by the federal government. The rest are owned by state, tribal or private entities.)

The state has its own protection plan: On April 27, surrounded by Navajo officials and activists at the Counselor Chapter House, state lands commissioner Stephanie Garcia Richard signed a moratorium on new mineral development on state trust lands within the buffer — about 72,776 acres.

But neither measure affects existing wells on state or federal lands, and companies can still drill for minerals controlled by the Navajo Nation or individual Navajo landowners. And given the Trump administration’s embrace of fossil fuels, it’s unlikely that the congressional bill will become law anytime soon.

Meanwhile, BLM continues to offer oil and gas leases in the greater Chaco area, over the protestations of local Navajo officials. In a 2017 report, they urged BLM to suspend further leasing until it completes a new management plan and until “a full understanding of potential environmental and health impacts of horizontal hydraulic fracturing is developed.”

So far, BLM, which oversees the vast federal mineral estate and has prioritized oil and gas development under the Trump administration’s “energy dominance” policy, has not agreed to such a hiatus.

Robert McEntyre, a spokesman for the New Mexico Oil and Gas Association, says fears of an oil and gas rush in the area are overblown. This region, he points out, is nowhere near as resource-rich as the booming Permian Basin in the state’s southeastern corner and neighboring west Texas. “That’s where proponents have really mischaracterized the Chaco issue,” he said. “Is there development potential? Absolutely. But it’s not going to be on the scale of the Permian.”

Nevertheless, oil and gas companies have shown enough interest here for BLM to offer hundreds of oil and gas leases in the area. (In response to public opposition, BLM withdrew the leases closest to the park.) Since 2015, the agency has received 420 applications to drill on leased lands, according to agency records.

Under a May 7 court ruling, BLM will have to reconsider at least some of the drilling permits it has granted. Environmental groups had challenged BLM’s approval of more than 300 permits, and an appeals court ruled that for 25 of them, BLM failed to fully consider the cumulative impacts those new wells would have on the environment and historic sites.

Something in the air

As officials, politicians and the courts debate the future of oil and gas development here, residents continue to tally the cost of living with more and more wells, pipelines and truck traffic.

Across from Lybrook Elementary School, just down the road from the Counselor Chapter House on U.S. 550, a hand-painted sign stands in silent protest to an invisible threat: “METHANE GAS, ODORLESS, TOXIC, IN OUR AIR.” Air samples collected at a well near the school in 2015 by Kendra Pinto, who lives on a nearby mesa and serves on the Counselor Health Impact Committee, showed elevated levels of hydrogen sulfide.

“The school is basically downwind from that site,” she said. “It’s very concerning.”

The next year, Pinto recalls, on July 11, a group of 36 oil storage tanks near Nageezi — just up the road from Counselor — caught fire, triggering a series of explosions and forcing residents to evacuate. The fire burned for four days, turning the sky from blue to black.

While good data on the link between reported health issues and oil and gas development in the communities around Chaco are scant, peer-reviewed studies of communities living near wells in other parts of the country suggest that residents here are right to be worried.

A study published in April in the Annual Review of Public Health, which reviewed six years of research, found that the closer residents were to oil and gas facilities, the more likely they were to experience health problems.

Diane Garcia-Gonzales, a UCLA air-quality scientist who led the study, said scientists are just beginning to realize the extent of the problem. “The industry is moving forward, and the science is behind trying to measure the health impacts,” she said.

The research so far suggests that children may be especially at risk. In a 2014 study of Colorado communities living near wells, Lisa McKenzie, a professor at the University of Colorado, Denver, found an association between proximity to oil and gas wells and congenital heart defects. In another, she found that children with leukemia were more likely to live near oil and gas activity. Few studies so far have been able to establish clear cause and effect though, she cautions.

For some residents, the toll of living with oil and gas is psychological. They report increased stress levels from the noise, vibrations and smells, as well as the bright lights of well sites.

Here too, recent research lends credence to residents’ concerns. In a study that looked at the effect of noise from oil and gas activity on nearby residents in Greeley, Colorado, “what we found is that noise can affect their sleep and cardiovascular health,” McKenzie said. “Sleep disturbance can cause an increase in stress, which can affect cardiovascular health.”

As the studies pile up and the wells keep multiplying, Pinto and other residents in the Chaco area are losing patience.

“We have to do something now,” she said. “Not five years from now.”