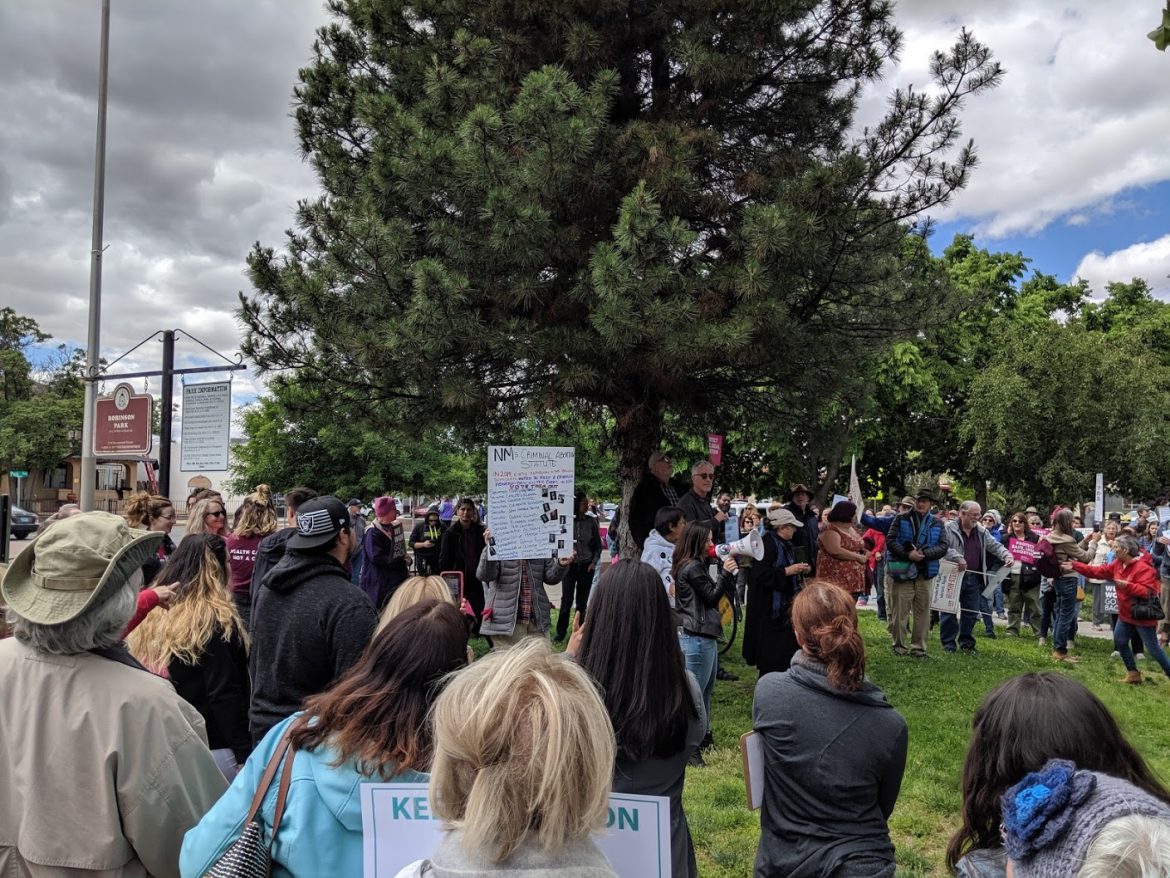 Ellie Rushforth, the ACLU of New Mexico Reproductive Rights Attorney, speaks to a crowd at the May 21, 2019 Stop the Bans protest.

A couple of hundred abortion rights activists gathered in Albuquerque Tuesday as part of nationwide “Stop the Bans” protests.

Ellie Rushforth, the ACLU of New Mexico Reproductive Rights Attorney, told the crowd, “We must keep fighting because our lives depend on it.”

The crowd then marched through downtown Albuquerque, holding signs and chanting slogans in support of abortion access.

Secretary of State Maggie Toulouse Oliver, who is running for U.S. Senate, attended the rally.

“I’m still fuming over the fact that the U.S. Senate put Brett Kavanaugh on the Supreme Court,” Toulouse Oliver said in a statement. “I can’t help but think that if more women were serving in the U.S. Senate, the outcome of the Kavanaugh hearings would have been very different.”

Organized by dozens of organizations nationwide, including in Albuquerque and Las Cruces, the protests are in response to  legislatures in Alabama, Georgia and Missouri passing restrictive laws attempting to ban abortion. In Alabama, the new law, which takes effect in six months, outlaws nearly all abortions and makes it a felony for a doctor to peform nearly any abortions. The law includes exceptions for the health of the mother, but not for cases of rape or incest.

Many advocacy groups have already said they’re prepared to  be challenge the law in court. Those opponents believe the laws will be struck down by courts, as previous abortion bans have.

Even President Donald Trump, who supports overturning the landmark 1973 Roe v. Wade U.S. Supreme Court decision, distanced himself from the Alabama law. And the law itself is largely unpopular.

New Mexico has its own statute outlawing abortion in most cases, but it is unenforceable because of Roe. An effort to repeal New Mexico’s law in case the U.S. Supreme Court overturns Roe failed in this year’s legislative session when several conservative Democrats voted along with every Republican in the Senate to reject the bill.

Several signs at the protest listed the Democrats who voted against repealing the New Mexico law and urged voters to defeat those Democrats.